French gas giant Total has landed a team of eleven engineers on its stricken and still leaking Elgin Platform in the North Sea as preparations continue to stem the leak – now in its 19th day – most likely with a dynamic kill from the platform itself. 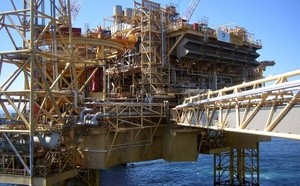 But a Norwegian-based oil and gas well expert is questioning the wisdom of proceeding with the dynamic kill, which involves pumping heavy mud into the well in an operation that will take several weeks.

Total said visits to the Eglin platform – 240 kilometers east of Aberdeen – will continue as it seeks a final resolution on the dynamic kill procedure – involving pumping heavy mud into the well – and simultaneous drilling of two relief wells.

Total’s UK managing director Philippe Guys told Scottish daily The Press & Journal that the French supermajor planned to carry out a the dynamic kill on Elgin’s leaking G4 well before next month.

The Norwegian Acona Flow Technology, however, have said that Total will face numerous challenges as it attempts the dynamic kill – if not risking making the leakage worse, Norway’s Tekniskukeblad reported.

“The challenge of a gas blowout is that the velocities of the gases and fluids that leak are high,” said Trygve Rinde, an expert in flow technology with Acona told the paper.

“This means that gas will dilute the [mud] and prevent it from circulating slowly. The operation then has to be performed faster, and pumps and pressure will experience enormous impact because of speed and friction in the well,” he said.

Ultimately, these complications could lead to expanding the holes in the surface wellhead on the Elgin platform through which the gas is currently leaking.

“This is a pipe that is not designed to withstand such pressure,” said Rinde.

“Therefore the plugging could become a complex procedure.  The pump operation must be performed in such a manner that it does not further damage the already overloaded pipe. The procedure is difficult enough as the well is old and has experience many years of wear – the question is, what will it actually tolerate?” he said.

“Slug flow experiences extraordinary highs and extraordinary lows as the liquid slug reaches obstructions such as pipes and valves with great force,” said Fjøsna. Slugs are large quantites of liquid in a pipeline separated by relatively large gas pockets.

“Comprehensive risk assessment must be conducted, as we still have an active gas leak and no guarantee that the dynamic kill will work,” he said. “A balance needs to be found between stopping it or making it worse, as well as a modelling and analysis of the multiphase flow that will result.”

Kristiensen noted that the simultaneous relief wells being drilled could mitigate continued damage should the dynamic kill fail.

The gas leaking from the Elgin platform is coming from the chalk and limestone Hod formation some 4,500 meters below the sea about and 1,500 meters above the main production well, Thierry Debertrand, Total’s crisis team head, told Bellona by telephone late last month.

Gas from the Hod formation is ingressing into the annulus, or pipe casing 4,500 meters below the seabed and 1,500 meters above the G-4 well’s main reservoir.

The weakness of the pipe casing is no mystery to Total, as described by Total experts in a report produced in 2005 obtained by Bellona.

The Hod formation is regionally distributed, covering a wide area. It is of high pressure – 800 bars according to Debertrand.

Information on the Hod formation is sketchy, as the reservoir has never been commercially produced. However it is know that the gas it contains is clean, meaning that it does not contain hydrogen sulfide. This will result in fewer detrimental environmental impacts.

Visits to well to continue

Total and engineers from Houston, Texas-based crisis management company Wild Well Control have already made two flights prior to the latest to the platform since all 238 crewmembers were evacuated on March 25.

The first sortie took place Thursday last week and the second on Tuesday earlier this week.

The crew sent Tuesday carried out further inspections, cleaning work and recorded the pressure of gas spewing out of the well. No figures have yet been made available.

Specialist equipment was flown into Aberdeen in Scotland over the weekend from Houston-based crisis management company Wild Well Control, which is advising Total on how to plug the leak.

The dynamic kill was elected as the primary stopgap measure after the reconnaissance team found that conditions were safe enough to allow the operation.

Transocean’s semi-submersible Sedco 714 and the jack-up Rowan Gorilla V are standing by to drill relief wells should the dynamic kill fail.

All of the platform’s 238 crewmembers were evacuated after gas started leaking on Sunday 25 March. Anglo-Dutch supermajor Shell also pulled all workers from its nearby Shearwater platform.

Tests on fish from close to the gas leak have shown they are “untainted,” reports the government-operated Marine Scotland. Full chemical analysis results of water and sediment samples taken from the edge of a three-kilometre exclusion zone around Elgin are expected by the end of the week, the agency said according to Upstream.

Total has released an animated video on YouTube of its plans to control the gas leak and has lined up a trio of rigs and a large vessel for the series of operations.

Despite naming the two rigs to drill the relief wells – Transocean’s semi-submersible Sedco 714 and the jack-up Rowan Gorilla V –  the company has refused to identify the semi-submersible lined up to assist with the top kill job. The Skandi Aker will also be involved in the process of pumping mud into the well.

Market sources have indicated that the Transocean trio of Sedco 704, Sedco 712 and JW McLean may be likely candidates due to their relative availability in the North Sea, Upstream reported.

Gas was spewing from the platform at a rate of some 200,000 cubic meters per day, but this has diminished, Total spokespeople have been telling the press since last Thursday’s visit by engineers to the platform.

A sheen of gas condensate also remains visible on the water surface.