Tests on fish from close to the gas leak platform in the North Sea have shown they are “untainted”, the Scottish government has said, citing an unusual tactic for reaching their results – the use of specially-trained fish tasters. 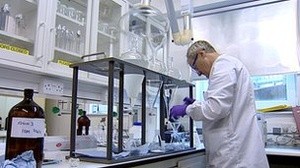 The Alba na Mara research vessel spent the weekend at sea taking samples near Total’s leaking Elgin gas platform which were then analyzed. The platform was evacuated after gas started leaking on Sunday 25 March.

Engineers meanwhile visited the platform for the second time today in preparation to kill the well, said Total. Their first visit was last Thursday.

Scottish Environment Secretary Richard Lochhead announced their verdict Wednesday in a statement on the government’s website.

“They are untainted by hydrocarbons,” he said.

Bellona President Frederic Hauge said earlier he had not expected that the ongoing gas leak at the Total’s Elgin Platform would have a significant impact on the marine environment.

“It the end, it is not a gas leak directly into the sea so I do not expect to see extensive damage to marine ecosystems,” he said Tuesday.

“The area is not a particularly important fish spawning ground, nor is it an important habitat for sea foul. It is a very dangerous situation, certainly, but it is not an environmental catastrophe at the moment.”

He did caution however, that climate data, once revealed, may be damning. The primary component of the gas, which is still being released at a rate 200,000 cubic meters a day, is methane – 20 times as potent a greenhouse gas than carbon dioxide.

Full chemical testing of all environmental samples is continuing, with initial results expected by the end of the week.

“The environmental impact of this gas leak has been minimal so far, however it’s important we take precautions and analyse all available data,” he said. “Therefore it’s reassuring that sensory testing of the fish samples gathered by the Alba na Mara have found they are untainted by hydrocarbons.”

He added that: “Full chemical analysis work – including water and sediment samples – is ongoing and will provide further clarification on any impact.

Marine Scotland Science have the “necessary knowledge, skills and experience to carry out this work effectively, including the UK’s only specially trained sensory panel, “ continued Lochhead’s statement, adding, “We will continue our monitoring activities for the duration of this incident, so we can assess any impact on the marine environment and respond as needed.”

Second trip to platform for engineers

Engineeers meanwhile have made their second trip to the Elgin Platform – the first having occurred last Thursday – as part of preparations for well-intervention work aimed at shutting down an ongoing gas leak.

“Over the coming weeks, there will be several helicopter flights to the platform to undertake the required preparations and bring the necessary equipment before the well intervention can begin,” the French major said in a terse statement at about 9 pm Paris time Tuesday.

Engineers have opted to attempt a “dynamic kill” which involved injecting heavy mud into the well over a period of weeks.

The contingency plan is a far more time consuming and costly measure of  digging two relief wells. Transocean’s Sedco 714 was en route to the site for arrival as early as Today.

It is one of two rigs, the other being the Rowan Gorilla V, hired to drill relief wells at the site if the dynamic kill fails.