A flare is still burning atop Total’s embattled and leaking Elgin gas condensate platform in the North Sea as it has for the past three days even as the wellhead continues to spew a cloud of flammable methane, a spokesman for the French giant confirmed. 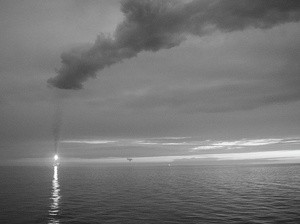 Total spokesman Tony Peakin told Bloomberg that the flare is “faint and decreasing” and poses no danger of igniting gas that’s leaking from a damaged well.

But the company has nevertheless put a pair of fire-fighting vessels on the scene “as a precaution” as it continues to try to contain a gas leak first spotted on Sunday.

Experts are concerned that if escaping gas connected with the naked flame in the flare stack it could explode. A spokesman said the flare was left burning when the platform was evacuated on Sunday.

The flare is 100 meters away from the leak on the wellhead platform, Peakin said from his offices in Aberdeen, Scotland.

The cloud formed by the leak is at sea level, below the flare’s 180-meter tower, and the wind is blowing the gas away from the platform, he said. Total has yet to determine the cause of the leak.A sheen of between two and 23 tonnes of gas condensate, measuring six nautical miles in length, has been reported on the water nearby.

Bellona President Frederic Hauge, however, noted that the prevailing winds, which are coming from the west, have kept the flare from developing into an explosion.

“Should the winds die down or change course, we fear it could result in a major disaster,” he said.

The Elgin platform, some 240 kilometers east of Aberdeen, was evacuated after a blow-out on March 25 during an operation to abandon a well.

Nearby platforms shutting down

Royal Dutch Shell shut its neighboring Shearwater field yesterday to guard against the risk of explosion. Total, France’s largest oil company, may need to drill an emergency well to intercept and plug the damaged well, an operation that could take six months.

Total has flown in Wild Well Control Inc. to help battle the leak and stopped work at a neighboring field to free up a rig – the Rowan Gorilla V – to drill a relief well.

The well causing the leak remained plugged and gas is coming from a smaller reservoir nearer the surface, David Hainsworth, a health, safety and environment manager at Total, said yesterday, adding the leak may exhaust itself naturally.

A remote controlled submarine arrived at Elgin at 11 p.m. yesterday to begin an assessment of the rig, Peakin said.

Hainsworth, told Britain’s Channel 4 News on Tuesday that strong winds were blowing the giant gas plume seeping from the wellhead away from the flare.

“The gas is mainly methane, it is very flammable,” he told Channel 4 news in his televised remarks.

“The flare is still alight on the main production platform. However, the wind is blowing the gas plume in the opposite direction, away from this flare.”

He added: “We know that the weather forecast is such that the wind direction remains the same for the following five to six days, and we’re evaluating options to extinguish this flare.”

He said he could not put a timescale on the flare being extinguished. The flare had been doing an important job taking gas off the platform, he added.

But, had there been time they would have considered putting it out. It was not possible to do that remotely, he said.

“The flare may burn itself out. Because it’s alight now doesn’t mean it will be alight in a hour,” Hainsworth added.

But Jake Malloy, offshore organizer for the RMT union in Aberdeen, also told Channel 4 that, “If the gas cloud somehow finds an ignition source we could be looking at complete destruction.”

Hainsworth played down the situation but reiterated the urgent need to stop the gas leak.

“We have an ongoing leak that we have to stop. It is not a disaster, no one has been injured, the environmental consequences are very low, but clearly we have to stop this leak,” he told the television station.

Total has shut down all production at its Elgin, Franklin and West Franklin fields following the discovery of the leak at the weekend. The oil major evacuated all 238 workers from the Elgin processing, utilities and quarters (PUQ) and the adjacent Rowan Viking.

Total is mobilizing the jack-up rig, Rowan Gorilla V, as it mulls the option of drilling a relief well, a process, which could take up to six months. As a jack-up vessel, the Rowan Gorilla V stands on the ocean floor and thus is not affected by bouyancy problems that affect normal vessel, said Bellona’s Karl Kristensen, an advisor with Bellona. With gas condensate in the water, said Hauge, standard ships risk sinking.

The Gorilla V is capable of drilling to 10,668 meters standing in 167 meters of water. The seabed is located 98 meters beneath the Elgin platform, Total has said, and the well is 5,000 meters deep.

Condensate from the fields is exported through the Forties pipeline to Scotland’s Kinneil terminal. Gas is pumped via BP Plc’s Unity Riser into the Bacton Seal terminal in eastern England, operated by Shell, according to Total’s website.