Flare atop Elgin platform fritters out, but questions on stopping the leak persist

A flare atop the crippled and still leaking North Sea Elgin gas drilling platform, which had for several days caused fears of a catastrophic explosion has extinguished itself, platform owner Total said Saturday. 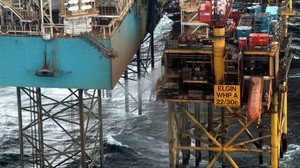 The flare, which had been left lit during evacuation of the oil production platform early Monday morning, was a special cause of concern to experts who feared the naked flame might come into contact with the gas leaking from the platform itself some 90 meters upwind.

Total officials has insisted since Tuesday, when news broke that the flare was still lit, that weather forecasts indicated this was an impossibility as the wind was blowing the gas cloud away from the platform, located 240 east of Aberdeen, Scotland. They said that that the flare would eventually burn out by itself.

“This is good that the flare has gone out as predicted, but there are still numerous things that must be done before this crisis is anywhere near a conclusion,” he said.

The first signs the flare had extinguished itself came from a surveillance flight at around noon on Friday, a position backed up by a flight later in the day.

“We received the first indication that the flare may be out at 12:07 [UK time on Friday] from a first surveillance flight of the day. A second flight at 16.36 confirmed this observation.,” a statement from the French oil giant read.

“We received what we consider final confirmation at 08:20 [on Saturday], when our sea vessels on location reported no further flare activity through the night,” Total said.

The leak must still be stopped

According to information obtained by Bellona, the only realistic possibility of stopping the gas flow is drilling a relief well, which could take up to six months.

Gas is seeping into the annulus, or pipe casing, of the G-4 well, which was plugged in February 2011, through a limestone and chalk reservoir called the Hod formation, Thierry Debertrand of Total’s crisis team dealing with the well, told Bellona in a telephone interview on Friday.

Abnormalities were noticed at the well four weeks earlier, in February, and the crew that was evacuated from the Elgin on Monday had been aboard in an attempt to address these issues when the leak became critical, Debertrand told Bellona in a telephone interview.

The Rowan Gorilla V, a jack-up rig, has been engaged to dig the relief well. The Gorilla V is already under contract with Total, so Debertrand said it was already being mobilized.

Other procedures considered by Total, Debertrand told Bellona, were eventually re-boarding the Elgin rig and performing a dynamic kill – a procedure that involves reclosing the well with drill mud.

Jake Molloy, of offshore union RMT-OILC, which represents thousands of offshore workers, told Bellona in a telephone interview that re-boarding the platform now that the flare is out is impossible.

“The flare didn’t really have any effect,” said Molloy.

“The gas leak is still flowing and there is gas around the platform, so it is far too risky to put anyone aboard it.”

“There is too much of a hazard remaining to put workers on the plaform,” he said. “If the gas does not stop leaking on its own, drilling [of the relief well] must being in 5 to 10 days,” he said.

Is Total withholding information from workers?

Molloy has slammed Total over the last 24 hours for withholding information from workers who were sent to Elgin to deal with the instabilities that resulted in the leak.

He said they repeatedly raised safety concerns about rising gas pressure but were told a leak “could not happen” only hours before one took place.

“The workforce had raised their concerns to the Offshore Installation Manager who in turn consulted with onshore technical authorities at Total…they were repeatedly told that a failure in Annulus C could not happen…and even if it did, a design feature would prevent a gas leak,” Molloy said.

“Several discussions between workers and Total technical authorities happened throughout the preceding weeks, up to and including a few hours before the event,” he said, referring to the leak that led to the evacuation.

A spokeswoman for Total in Aberdeen reached Friday said she could not immediately comment on the matter.

Where the gas is coming from

It is thus far impossible to say how much gas remains within the Hod formation, as it was never commercially produced.

But Debertrand said the reservoir has a pressure of some 800 bar and is expansive and laterally distributed across a large area.

It is estimated that the Hod formation still contains high quantities of gas, erasing the possibility that the gas leak will simply peter out on its own.

Debertrand estimated that some 2 kilograms a second, or 200,000 cubic meters of a day, of gas condensate were leaking, though he added that these figures are highly speculative. Satellites and airplanes have been used to establish the absence of hydrogen sulfide in the leaking gas.

He also said that condensate production is increasing with gas production.

Shell, meanwhile, which had evacuated its crew from the nearby Shearwater gas production platform on Tuesday, may be returning its workers and the platform to normal activity.