MURMANSK – Shtokman Development, the company responsible for implementing works at the Shtokman gas field, on Tuesday convened local authorities and the public for a hearing in the Kola Peninsula village of Teriberka, the site of a proposed gas condensate plant. 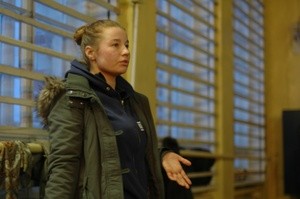 The meeting’s focus was the environmental impact of land-based structures that will come if or when the Shtokman project is implemented, and Bellona is far form reassured by what it heard.

Bellona both fears that a lack of preparedness to face accidents could cause an environmental disaster of many dimensions in the vulnerable Arctic area and the tremendous increase in CO2 emissions that will accompany a large-scale gas extraction here.

Further, the information that was presented was far from complete, and, as is usually the case at such hearings.

Violent and risky intervention in nature

Bellona Adviser and Russia expert Kristin Jørgensen insisted in a comment piece she wrote in 2007 that  the environment, all the same, will be the big loser in any major developments to extract gas from the Shtokman field:

“Shtokman lies far out at sea, and the weather in this part of the Barents Sea is among the worst in the world. In addition, the ecosystem is extremely fragile, and we know that it will take little to harm nature in the Arctic,” wrote Jørgensen.

“It’s hard to imagine how large Shtokman field is. CO2 emissions from the gas field alone will be equal to one-sixth of the global emissions,” she said, adding: “The development will not only happen at sea, a gigantic expansion of infrastructure on land will be required. In addition, gas will be transported by pipeline to Vyborg, north of St. Petersburg, a distance that takes two days by train. Interference with nature will be violent.”

The hearing took place in the school building in the small village of Teriberka 120 km outside Murmansk. This is the place where the gas from the Shtokman field is planned to come ashore.

Teriberka is a small community with two villages a few kilometers away. Unemployment is high at the site, and all the promises of new business are received with the hope of reversing the trend of poverty and depopulation. The area has a port that does not freeze over in the winter thanks to the Gulf Stream’s warm waters, and thus has the ability to build a port for receiving gas from the Shtokman field.

Representatives from Shtokman Development presented the plans for all installations on land, quietly and very seriously.

Yet the discussion among Shtokman Development representatives revolved mostly around the latest developments in the project without giving a complete picture because investment questions about the gas condensate plant and the pipelines remain unresolved.

Though Russian law dictates that hundreds of pages of material containing technical data on the environmental impact of such projects be presented to the public over several months, this hearing presented information in such an abridged form that it was impossible to discuss the degree to which the environment would be impacted.

The last hour of the three-hour hearing was set aside for questions and discussion.

Yet concerns of those who live in Teriberka are not precisely those of an environmental nature, and again they had several questions about whether new roads would be built, whether they would get bolstered fire protection as well as whether they would be compensation for lost natural resources that are traditionally used by local populations for hunting and fishing.

They were heard, but got few concrete responses.

In answer, the Shtokman Development representatives said, without blushing at the repletion of their remarks, that building roads is outside their competence, and that new homes would only be built for Shtokman workers. As far as compensation goes, the company suggested that medical personnel would visit the area on a regular basis for check ups, that stipends would be earmarked to send local students to institutes of higher education in Murmansk, that a landfill would be built for daily waste, and that the residents of the rural village would get clean water.

The promises are part of the usual compensatory package offered by the government, but remain, so far, on paper.

What can be offered on an environmental level?

According to Bellona Murmansk energy projects coordinator Nina Lesikhina, there are a number of things Teriberka can bank on as the Shtokman project is implemented. The atmosphere will be a receptacle for 23 types of polluting substances and irreplaceable use of local water will constitute 1 percent of the local lake per year.

As a result of the project’s implementation, local bird life will be harmed, as will small mammal populations as well as fish. Shtokman Development puts the figure on these damages at 15.6 million roubles ($532,000). And this is expected only upon the building of the land based structures like the pipelines, the workers village, a heliport, a fire station, an administrative unit, water intake systems and an electrical station – all without even building the gas condensate plant.

No less important is the impact that CO2 emissions arising from the Shtokman project will have. But the issue escaped discussion.

As time ran short in the question and answer period, Lesikhina got to ask Shtokman Development: Why were the calculations for CO2 emissions predicted for the Shtokman project not presented at the hearing when the figures actually exist?

In 2009, the Shtokman Development AG initiated a series of regular meetings with the regional environmental organizations on the Kola Peninsula to address the environmental aspects of the project.

The answer Lesikhina received from the company representatives was that the CO2 emissions were a part of Russian pollution legislation, and the emissions therefore are not relevant.

In order to minimize impacts on the climate, the company suggests shifting all boilers in the region to natural gas, which the company’s representatives say will facilitate a cuts in greenhouse gasses emitted by the project by three times.

But this comes with a caveat. The principle volumes of gas produced by the Shtokman field are slated to be delivered to the European Union and the United States, leaving a mere 5 percent for use in the Murmansk region, according to date citied by Lesikhina. The cut predicted in greenhouse gas emissions in the region as a result of the Shtokman project will be far less dramatic than the company has said, noted Lesikhina.

Prospects for the village

Murmansk residents have been told for years how the Shtokman project will bring investment to the region’s development. Tax revenue will flow into regional coffers, the region will shift from coal to natural gas, new jobs will appear, the economy will bloom and so on.

The same rosy outlook was predicted for residents of the far eastern Sakhalin Islands when planning for oil and gas extraction began there in the 1990s. But none of the dreams for this beautiful future came true, Andrei Cherepovitsyn of the St. Petersburg Mining Institute told Bellona Web in a recent interview.

Cherepovitsyn said in that interview that, according to the Russian federal tax structure, the federal government would receive 95 percent of the taxes produced by the project, leaving only 5 percent for the regional budget – and such will be the case with the Shtokman project.

Statistics also revealed that while the project was being implemented, the number of specialized and higher education institutes dropped, rather than rose, as did the number of students.

Cherepovitsyn also said there has been no noticeable improvement of infrastructure on Sakhalin in general. Only certain small factors have been improved and they are relative only to the project. Instead, several violations of environmental law were brought to light.

“Developing large oil and gas field is not always attractive for the development and economy of a region,” he sai

Environmental concerns at the bottom of the list in Russia

“Currently there is not one company in the world that has effective technology for the liquidation of accidental spills of oil and petroleum products in the Arctic,” said Bellona’s Lesikhina.

“And the emergency response system in the Murmansk Region is characterized by a lack of specialized equipment, the distance of emergency response stations, the absence of contemporary means of predicting the behavior of oil spills, and a deficit of financial means for defense and cleansing of coastlines. And without this, we cannot even talk about implementing oil and gas projects in the Arctic,” said Lesikhina.

She added that the situation with experience in far north petroleum production is somewhat better in Norway. But, she added that, “this experience is clearly insufficient – the problems at Gullfaks C and Snøhvit only confirm this.”

Lesikhina summarized that meeting did not bring anything particularly new to the table as far as environmental issues were concerned. Apart from promises made about clean water to locals and improved fire protection, the meeting ran mostly off the rails.

“Information about the environmental consequences of the project were presented in such a limited way that it was not possible for people to fathom of the serious consequences,” said Lesikhina.

“The result was that people were left with more questions than answers. Despite that, the chairman ended with the conclusion that it was taken for granted that all participants at the hearing were now prepared to embrace the plans,” she said.

Ruth Lothe reported from Murmansk in Norwegian and Nina Lesikhina contributed in Russian. Charles Digges wrote this report in English