A fire that broke out at the Melkoeya liquefied natural gas (LNG) plant in Norway in September was caused by an oil leak brought about by prolonged maintenance backlogs and cost-cutting measures, an investigation by Bellona has determined,

Published on November 17, 2020 by Charles Digges

A fire that broke out at the Melkoeya liquefied natural gas (LNG) plant in Norway in September was caused by an oil leak brought about by prolonged maintenance backlogs and cost-cutting measures, an investigation by Bellona has determined.

While Equinor, the plant’s operator, and Norway’s Petroleum Safety Authority have yet to complete their own reports, Bellona’s hopes that its findings will expose the negligent maintenance issues and poor safety culture that led to the near disaster.

The blaze, which struck one of the plant’s electricity-producing turbines, had the potential to become the worst accident in the history of the Norwegian oil industry, Bellona says, noting that total destruction of the plant was averted only by luck. The impact on the environment would have been profound, comprising massive spills of chemicals and long-term contamination.

The plant, also known as Hammerfest LNG, will remain closed until October 2021, Equinor has said, while repairs and investigations by Norwegian police and the PSA continue.

But the new report by Bellona asserts that those investigations are bound to be insufficient, given the PSA’s past failures to hold the Hammerfest LNG plant accountable for numerous safety violations. These oversights, Bellona believes, present the agency with a conflict of interest that will hobble its own investigation. 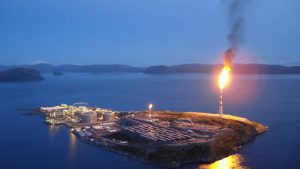 A view of the Hammerfest LNG plant at night. Credit: Joakim Aleksander Mathisen/Flickr

“Bellona started the investigation because we suspected the PSA and Equinor to have conflicts of interest in the investigation, and that underlying causes of the fire, especially organizational and cultural issues, might not be adequately addressed in the police report”, says Frederic Hauge, founder and president of Bellona. “We want a fair investigation.”

Europe’s only large-scale LNG plant is located outside the Arctic town of Hammerfest and can process 18 million cubic meters of gas per day. The gas is piped in from the offshore Snoehvit field some 160 km away in the Barents Sea. After cooling the gas until it turns to liquid, it is shipped in tankers to energy markets in Europe and Asia.

But its operations were crippled on September 28 after hot oil leaked into an air filter at the plant’s fourth turbine, sparking an intense fire that burned for seven hours. By chance, a fire-fighting vessel, whose normal response time is two and a half hours, was located closer to the facility that day and extinguished the blaze before far greater damage could be done.

Indeed, if not for that vessel, the Hammerfest LNG plant would have been largely helpless, as, at the time, it only had enough water to fight a fire for a half an hour. Earlier safety audits by the PSA had questioned whether the plant had the water capacity to fight a significant blaze. But the agency failed to follow up to ensure improvements had been made,  the Bellona investigation finds.

The oil leak that caused the fire was also foreseeable. Bellona’s investigation reveals that the Sept 28 leak was only one of a string of dozens that were noted in Equinor’s maintenance program but never sufficiently addressed. Nor, the report asserts, were many of those issues ever brought to the attention of the PSA.

Maintenance records reviewed by Bellona showed that Equinor was aware of 37 hot oil leaks in air intake filters within the Hammerfest LNG’s turbines that occurred between 2007 and 2020. Specifically, records show that health and safety inspectors warned of such leaks in 2016, 2019 and 2020 – but that no action was taken to remedy them.

One of these oversights, Bellona’s investigation reports, was a malfunctioning fire alert system – which on the day of the blaze registered several faults, but no one at the plant bothered to address them. Thus the fire was detected manually.

“Our information points to serious design and construction weakness at the plant, serious negligence in follow-up of maintenance issues, and an astounding lack of attention to safety by top management,” said Hauge.

The Bellona investigation goes on to reveal that cost cutting measures at Hammerfest LNG have led to an epidemic of deferred maintenance  – including for equipment that is critical to the facility’s safety. Bellona counted 11,311 calls for maintenance at the facility that had yet to materialize as work orders for repair.

Audits by the PSA have likewise found that the Hammerfest LNG plant has weak systems for assessing safety risks. The agency discovered that numerous alarm systems out of order and that inspections weren’t being carried out.

The PSA and the Norwegian Environmental agency further reported that they discovered 30 breaches of safety regulations – so called nonconformities – at Hammerfest LNG, as well as an additional 28 suspected breaches, between 2017 and 2020. Bellona’s investigation revealed that many breaches remain unaddressed, but that Hammerfest LNG has nonetheless reported those breaches as remedied.

“Bellona has clear proof that Hammerfest LNG has avoided accurate reporting to the Petroleum Safety Authority by registering nonconformities as closed out without the work actually having been carried out,” Hauge said.

As a result of its investigation, Bellona is calling for the following: