Today The Norwegian Shipowners’ Association stated their support for a ban on the use of heavy fuel oil (HFO) in Arctic waters, a move Bellona strongly welcomes. They promise to pursue this ban within the International Maritime Organisation (IMO). 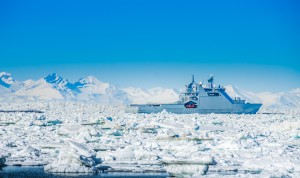 Today The Norwegian Shipowners’ Association stated their support for a ban on the use of heavy fuel oil (HFO) in Arctic waters, a move Bellona strongly welcomes. They promise to pursue this ban within the International Maritime Organisation (IMO).

HFO is already banned in the North Sea, the Baltic Sea and in the coastal areas of the US and Canada. Ironically, however, it is still allowed in the world’s most vulnerable ecosystems: the Arctic. About 44 percent of ships operating in the Arctic use HFO. The ships emit CO2, sulphur and soot which accumulate in Arctic ice and act to accelerate ice melt by weakening its ability to reflect solar radiation. Increased shipping activity in the Arctic also raises the risk of a major oil spill. Moreover, an accident involving a mega ship and spill of HFO in the Arctic would represent an environmental disaster. If spilled in cold Arctic waters, HFO will have larger consequences than anywhere else.

Shipping activities in the Arctic waters are increasing, both as a result of tourism and exploitative industries’ activities. According to the Arctic Marine Shipping Assessment (AMSA), a working group of the Arctic Council, there are approximately 6 000 operational vessels in the Arctic, of which 1 600 belong to the fishing industry.

Bellona has for a long time pursued the banning of HFO in the Arctic, together with Arctic express Hurtigruten and Clean Arctic Alliance among others, and welcomes this positive and progressive standpoint for a green change in the shipping industry. Bellona urges ship owners to adopt the necessary regulations now; otherwise the shift to greener technology will take longer and be more expensive. Best available technologies, such as battery hybrid solutions, must be deployed in the Arctic. Yet, the very first step is to ban the dirtiest and cheapest fuel.

A ban would also include ships sailing to and from Greenland, Iceland, Russia, Canada and Alaska, as well as ships sailing between Europe and Asia through the North-eastern passage. Climate change is making the shorter Nordic route more attractive and thus exposing it to increased shipping.

Earlier this year, the EU Parliament called for an international HFO ban through the IMO. The EU also threatens to close its harbours for HFO-powered ships operating in the Arctic, should the IMO fail to ensure timely action.

As one of the first shipping companies to support the ban, Hurtigruten has phased out the use of any HFO in their ships. Although, initially more costly, cutting reliance on HFO is a necessary move for protecting the fragile waters for coming generations, while aligning shipping emissions with objectives of the Paris Agreement.

The issue will also be raised in the IMO’s Marine Environment Protection Committee meeting in London this week. Norway, Canada, Finland, Germany, the Netherlands and the US have tabled a proposal for a HFO ban, and while a final decision is not to be expected at the meeting we are to see first reactions from other Member States.