‘Trial of the Century’ finds against Norwegian drilling in the Arctic

In November, Norway has a court date to face a suit brought by two environmental groups that say the government’s grant of oil leases in the Barents Sea region violates the country’s constitution. 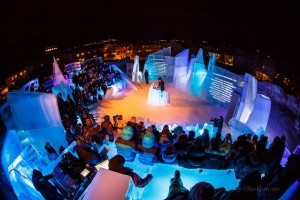 The Trial of the Century on a stage of ice. (Photo: barentsspektakel.no)

In November, Norway has a court date to face a suit brought by two environmental groups that say the government’s grant of oil leases in the Barents Sea region violates the country’s constitution.

That case wont be heard until November, but already, things aren’t looking good for the government: a mock trial in a sweeping three day stage production that showed at the Kirkenes conference last week ruled for the plaintiffs.

In the real suit, the environmental groups allege the government is violating article 112 of the Norwegian constitution, which guarantees the right to a healthy environment. The article obligates the government to deal responsibly with natural resources and maintain biodiversity in the interest of future generations.

Last fall, the Norwegian chapter of Greenpeace and Nature an Youth (Natur I Ungdom) said Oslo was failing to do that and took up a collection to take the capitol to court, raising thus far about $60,000 and gathering 8 million signatures on social media.

Less costly but no less rousing was the piece of performance art that dramatized the upcoming November court date that was staged at the Barents Spektakel that ran back to back with the Kirkenes Conference.

Some would argue the performance, called “The Trial of the Century” was no less real either: Prosecution and defense were played by legal experts, witnesses came from institutions involved in the suit, and they argued not only its merits in front of an audience of hundreds, but also prodded questions of climate change and the future of human existence.

The scenery reflected the sentiment. The stage was an arctic amphitheater constructed of 180 tons of ice, and the legal ad-lib played out in sub-zero temperatures.

Drama though it might have been, it read like a chilly courtroom. Witnesses were actual politicians, environmentalists and researchers. Prosecutors and the defense team were lawyers and law professors.

Norway’s oil and gas industry, however, bowed out of taking part in the mock trial. Morten Traavik, the politically daring Norwegian actor and director who staged “The Trial of the Century,” said he asked key officials in Norway’s state oil juggernaut to participate, but they declined.

“That the minsters are busy isn’t a respectable reason not to appear in this people’s court,” said Traavik. “Even the king must answer to a people’s assembly.”

The prosecutor, played by University of Oslo law professor Hans Petter Graver, presented the case that the government’s decision to grant oil exploration licenses in the Barents Sea violates article 112 of the Norwegian constitution. 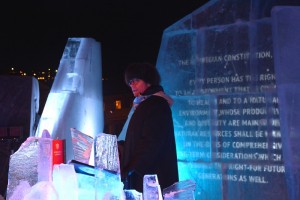 “Oil, of course, creates jobs, but money doesn’t justify climate losses,” he said. “We can’t make decisions only in our own interest, to Northerners, but to the detriment of other peoples. Other countries make anti-environmental decision, but that’s not a justification for us.”

“Politicians refer to the need to develop northern territories and jobs for young people, but who will need these jobs? Are you sure climate change won’t make our region unsuitable to our life?” was the point of view put forward by Stine Østnur, an activist with Nature and Youth. She was born in northern Norway, and she resented older politicians forcing their decisions on her generation.

But the defense contested in the mock trial that the country needs its oil, though those acting on the government side came to a variety of conclusions. A number of researchers suggested that the oil industry has become more environmentally responsible, citing the example of carbon capture and storage technologies.

Some who represented the Barents Spektakel organizers noted that cultural events like the one the audience was watching are financed largely by money from Norway’s oil industry.

Morten Grønvigh, a senior lawyer Hammervoll Pind who deals with offshore and nautical issues, represented the defense. He pointed out that Norway owed its high standard of living and economic well being to profits from oil.

“I intend to do everything I can to make our city the main port and hub for oil drilling on the continental shelf,” said Rune Rafaelsen, the mayor of Kirkenes, which last year lost about 400 jobs in the mining sector. “This will create new jobs.”

Ole-Gunnar Rasmussen, head of the workers union at Statoil, Norway’s state oil giant, was more categorical. He warned that several projects the company was running would be completed this year, and he said that if further exploration in the Barents Sea was precluded, 10,000 people would end up our of work.

Rasmussen concurred with the younger activists’ compassion for cities that could get inundated thanks to climate change. But he said that compassion shouldn’t eclipse the livelihood of fellow Norwegians.

Rasmussen has little faith in environmental innovation, saying an eventual shift to clean energy technologies and the development of renewable energy is a myth. Tesla electric cars, he said, won’t change things much, and environmentalists are holding out false hopes for energy production from algae.

The Trial of the Century’s verdict, however, voiced hope for the environmental vision. Of the 123 people who made it through the three days of sub-zero temperatures, and constituted the jury, 74 people found that the Norwegian government was violating the constitution by permitting more oil leases in the Barents Sea. Forty

Organizers of “The Trial of the Century” doubt their production will influence the actual trial in November. But the mock court shows divisions in Norway over progressing with the government’s historic oil agenda – divisions that could reach far beyond Norway’s borders.