Published on February 5, 2016 by Bellona Europa

“What was clear from today’s event is that the Norwegian government is but an arm of the oil and gas industry. As if it wasn’t clear enough from the agenda, a large portion of the audience, including political leaders, only appeared interested in the gas portion” says Bellona Advisor Marika Andersen.

“Norway sells gas as a climate solution, but it’s not. The EU’s 2050 Energy Roadmap is clear on the need for carbon capture and storage with any fossil fuels. Norway has so far failed to present any real plans for dealing with the CO2 from all their gas. The game they are playing in Brussels is therefore not one they can win,” comments Bellona Europa, Director Jonas Helseth.

“It was crystal clear, on our relationship on gas”

These were the words of the Commission’s Director-General for Energy Dominique Ristori following Minister Lien’s remarks.  In a rapidly changing energy market with plummeting oil and gas prices, one message was clear from both sides: The EU depends on Norway for its gas supply as Norway depends on the EU for its gas demand.

Nearly all the gas produced in Norway is sold to Europe and Norway delivers about  25 % of the EU’s gas needs. Commissioner Arias Cañete underlined, Norway is the friendliest of the EU’s friends with gas.

Securing a gas market in a decarbonising world

Minister Lien came to Brussels with a concrete message: That he needs clear signals that gas will play an important role in the future energy mix. The Norwegian government needs such reassurances to keep exploration, drilling and production alive on the Norwegian continental shelf. This was already communicated a week earlier, in this letter to the Commission.

A few days from now the Commission plans to publish its security of supply package, about which Commissioner Arias Cañete said to Minister Lien “can only strengthen our relationship”. The Commissioner went on to say that gas “can and will act as a bridge to help us get to where we need to be”

The Commissioner really could not be clearer about the EU recognising gas as part of its energy transition. Yet Minister Lien continued to hammer home the message, moving on to talk about gas resources in the Arctic, gas as partner to variable renewable energy and as the alternative to coal. 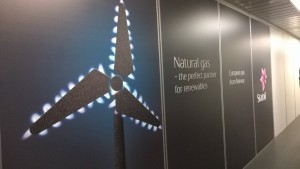 “Minister Lien might just as well have taken the Commissioner on a tour of Statoil’s long-running ad-campaign at Brussels airport, where the exact same messages are displayed at every gate,” said Andersen.

Norway is more than gas – but how is anyone to know?

When challenged by the audience on whether Norway is simply trying to “dump its dirty fossil assets” on Europe while itself enjoying clean hydropower, Minister Lien noted the surplus renewable power Norway will be sending to Europe via new interconnectors to the UK and Germany.

Commissioner Arias Cañete drew attention to the launch event for the Norway-UK interconnector taking place in two weeks. The interconnector will become the world’s longest undersea interconnector and provide hydro-electricity to 750,000 British homes by 2025.

But the conversation quickly returned to gas. The panel following the Commissioner and Minister, where Statoil and Shell were amongst the panellists, discussed What role for gas in the EU of tomorrow.

And by the time the next panel on The Nordic electricity market as a model of regional integration took its place, at least a third of the audience, including political leaders, had left.