In a dramatic bid to rebuke Republicans’ claims he isn’t doing enough to boost US energy security or deflate soaring gasoline prices, President Barack Obama embraced a plan to grant fast-track status to the proposed southern leg of the controversial Keystone XL pipeline. 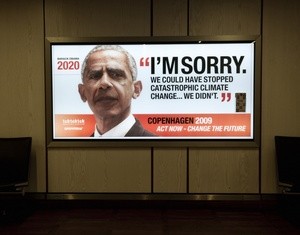 Environmentalists cheered the president for shelving the project over greenhouse gas emissions the project will create, while noting Obama’s caveat that the decision could change after environmental reviews are completed. But few expected the White House to be waving the flag for Keystone XL so soon.

Now environmentalists are outraged at the turnabout and see it as a capitulation to arguments made by Republican candidates for the presidency – specifically Mitt Romney – that the move will lower at the pump gas prices and create jobs.

“We are really disappointed that president Obama is shying away from trying to make a dent on US greenhouse gas emissions and rather wants to win over oil men instead of showing environmental leadership,” said Svend Soeyland, Bellona’s Senior Advisor on International Energy and Climate.

In a visit Thursday to Cushing, Oklahoma, which touts itself as the “pipeline crossroads of the world,” the president unveiled his support for a smaller 500-mile portion of the pipeline – a southern leg that would run to Gulf Coast refineries in Port Arthur, Texas.

“Today I’m directing my administration to cut through the red tape, break through the bureaucratic hurdles, and make this project a priority, to go ahead and get it done,” Obama told an audience in Cushing. The pipeline will be built by TransCanada.

In backing the pipeline’s southern leg, Obama is walking a fine political line – seeking to defuse Republican critics who say his energy policy is tilted toward renewables like solar, while also trying to appease environmentalists who say the pipeline is unnecessary and presents a major ecological threat, political analysts say.

But building just the southern leg of the Keystone XL pipeline would still mean transporting a lot of heavy crude from Alberta’s tar sands that reaches it via existing pipelines – a key point made in a 2010 study by the US Department of Energy.

It found that Canadian tar-sands oil would still reach the US unimpeded – through smaller pipelines and rail – whether the Keystone XL pipeline is built or not.

“The [Republicans have] tried hard to tie high gas prices and a sluggish economy to the president’s decision to delay Keystone XL pipeline,” said Mike Wagner, political scientist at the University of Nebraska at Lincoln. “He’s following a textbook campaign strategy. If the president endorses the southern section, it could blunt Republican criticism of him on that issue, at least among independent voters.”

The real threats of Keystone XL

But while those two issues have taken a primary position in many environmental arguments against building the pipeline, they ignore larger concerns about the pipeline project, which are where the oil comes from: the Athabasca Oil Sands (tar sands) in Northern Alberta.

Bringing tar sands oil to market burns more hydrocarbons, which is the dirtiest type of oil, leaving an enormous carbon footprint, Dr. Andrew Light of the Center for American Progress has noted.

Such concerns were among those discussed within the Administration after a 2010 Environmental Protection Agency (EPA) analysis of the State Department’s draft environmental review of Keystone XL underscored that a comprehensive evaluation would have to consider the tar sands industry’s greenhouse gas emissions.

A year later, the EPA wrote in comments on the State Department’s second draft that it was “concerned about levels of greenhouse gas]emissions associated with the proposed project, and whether appropriate mitigation measures to reduce these emissions are being considered,” said Inside Climate News.

The EPA asked the State Department “to identify practicable mitigation measures” for the “entire suite” of greenhouse gases associated with operation of the Keystone XL.

In a statement issued in November, the State Department said that any decision on whether the pipeline is in the national interest should consider “all of the relevant issues,” such as “environmental concerns (including climate change), energy security, economic impacts, and foreign policy.”

Climate change is rapidly becoming an issue that is gaining popular traction with the American pubic, said Soeyland, citing recent polls suggesting that some 86 percent of those polled believe climate change to be man-made – a dramatic change since the beginning of Obama’s first term.

Knee-jerk reaction to republican could loose the climate vote

Obama has only to cash in on that portion of the vote.

“Opinion polls show there is only a net gain to be had for Obama” by sticking to his original guns on the climate change issue, said Soeyland. By rejecting the greenhouse gas emitting Keystone XL project, said Soeyland, “[Obama will attract new supporters and loose very few, if any.”

This assessment seemed to bear itself out in grassroots fashion when Obama, speaking at Ohio State University later that day, was drowned out by cries from the crowd saying “stop the drilling.”

Environmentalists also cite a new study by Cornell University that found Keystone XL would be an economic liability that could produce up to 91 significant spills over a 50-year period. Tar-sands oil is not only more likely to spill, but it is also harder to clean up, they add, citing the 2010 Kalamazoo, Mich., pipeline spill that is still being mopped up.

Jobs down, gas prices up

Romney and other proponents of Keystone XL have asserted that the pipeline will lead to a job boom and a steady supply of oil from a trusted ally.

But Soeyland argued that the pipeline would create a limited number of jobs and do nothing to decrease gas priced at the pump. Indeed, an irony that seems to be lost in the math is that connecting Cushing to Gulf refineries will raise crude oil and gasoline prices in the Midwest – traditionally Republican held territory.

That’s because much of that large pool of oil bottled up in Cushing, which has tamped down prices across the region, would flow through the new pipeline to Gulf refineries – and on to international markets. Thus, as Soeyland pointed out, the southern portion of Keystone XL will not even be servicing the purposes of building a US oil reserve.

“We knew that the temporary rejection of Keystone XL [by Obama] was not set in stone,” said Soeyland. “But there is a fear that struggling environmental organizations in the the US will be further demoralized by this flirtation with Texas oilmen.”

Gas per gallon prices in the US continue to hover around $4.00 a gallon. In Norway, with its vast domestic oil reserves, gasoline costs $10 per gallon.