On July 12th, the European Commission announced their pre-selection under the second call for large-scale projects of the Innovation Fund. The 17 pre-selected projects focus on key technologies for industrial decarbonisation and include project developers from different corners of Europe. 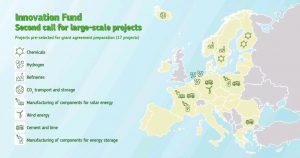 On July 12th, the European Commission announced their pre-selection* under the second call for large-scale projects of the Innovation Fund. The 17 pre-selected projects focus on key technologies for industrial decarbonisation and include project developers from different corners of Europe.

As an active participant in the expert group meetings for the Innovation Fund, Bellona is happy to have contributed to the design of the parameters for the Fund that led to the pre-selection of these projects.

Bellona welcomes the pre-selection of these projects since they show significant potential to reduce emissions from European cement and chemical industries and create clusters that can grow beyond the scope of the Fund.

One of Bellona’s long-held priorities is the deployment of integrated CO2 capture, transport and storage chains. Bellona has long called for the deployment of CCS for cement, an industry with no viable alternatives for decarbonisation. The projects pre-selected in this 2nd Innovation Fund call for large-scale projects will certainly contribute to that development and increase the possibility for infrastructure sharing, not only in Northern Europe but also in Central and Eastern Europe.

In addition to the integrated nature of these projects and their focus on industry, Bellona welcomes the geographical diversity of the projects which is necessary to provide access to crucial CO2 transport and storage infrastructure for industries across all Member States.

Apart from supporting key infrastructure developments for CO2 transport and storage in the EU, the Innovation Fund pre-selection includes some key components necessary to reach carbon neutrality in the power sector:

What slipped through the cracks – projects with questionable climate impact

While most of the projects will benefit climate action in industry, some could have a questionable carbon footprint and need to be monitored during their implementation and development.

The origin of the CO2 used in these projects, particularly with potentially mixed sources such as waste incinerators, should be clarified to assess their full climate impact. This is an outstanding issue in the selection criteria of the Innovation Fund that Bellona will continue to engage on.

All CO2 should be kept away from the atmosphere, in particular CO2 of fossil origin. This means that it can technically be used to produce synthetic fuels and chemicals but needs to be accounted and payed for where it is captured in the EU ETS.

Overall, the 17 pre-selected projects form a sound basis for significant emission reductions in the industries of the EU. Bellona is proud to have collaborated with some of the applicants and wishes to congratulate them and the Commission for building momentum towards large-scale deployment of technologies which can lead us to climate neutrality.

At the same time, Bellona is cautious of the projects which appear to have questionable climate benefits and will continue to scrutinise the Fund to ensure it only supports effective projects.

* These projects have been pre-selected, which means there is a final step needed to finalise these. It is expected that the final selection of the projects will reflect this pre-selection.