Bellona Europa’s Hanna Biro, originally from Hungary, recently travelled to her home country to attend a local workshop that gathered national CCS stakeholders. The workshop sought to identify challenges and limitations to CCS deployment in Hungary, as well as ways to overcome them. The workshop was organised in the framework of the CCS4CEE project   that Bellona Europa participates in as an expert partner. The brainstorm that took place during the workshop touched upon questions of national legislative barriers, essential regulatory incentives, the need for national-level coordination, as well as geological capacities. 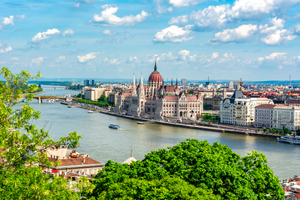 Bellona Europa’s Hanna Biro, originally from Hungary, recently travelled to her home country to attend a local workshop that gathered national CCS stakeholders. The workshop sought to identify challenges and limitations to CCS deployment in Hungary, as well as ways to overcome them. The workshop was organised in the framework of the CCS4CEE project   that Bellona Europa participates in as an expert partner. The brainstorm that took place during the workshop touched upon questions of national legislative barriers, essential regulatory incentives, the need for national-level coordination, as well as geological capacities.

In this blogpost, Hanna Biro, Policy assistant at Bellona Europa, explains that while in many ways Hungary seems ideal for CCS deployment, Hungarian stakeholders – keen to make the first move – are still facing barriers to entry and development in the form of financial risks and lack of fora to facilitate coordination. These are barriers that could be successfully addressed by public recognition, action and support. Financial support for transporting CO2 through rail and road on the short to mid-term is regarded as essential to kickstart CCS deployment in Hungary – a country that already has considerable experience with CO2 injection and is keen to adopt mature carbon capture technologies already commonly used in other parts of Europe.

As Hungary works towards meeting the EU’s emissions reduction targets on the way to climate neutrality by 2050, Carbon Capture and Storage (CCS) technologies – crucial for effective and large-scale industrial decarbonisation – are being considered as part of the solution. 12% of Hungary’s national emissions occur as a result of industrial processes and product use, due in part to Hungary’s cement, steel, and chemical production. These are all economic activities that will   benefit from regional CCS deployment as the extent to which they can be directly electrified or decarbonised by other means is limited or even impossible.

This is what national stakeholders gathered to discuss during a recent workshop organised in the framework of the CCS4CEE project, in which Bellona Europa participates as the expertise partner. While many stakeholders are keen to make the first move towards realising the first CCS projects in Hungary, they cite a number of concerns that seem to have held off the realisation of such projects in the past, and if unaddressed could continue to do so.

Namely, financial risks that government seems reluctant to bridge through support, and the lack of fora to facilitate coordination among stakeholders. Such large-scale CCS projects often require bi- and multilateral agreements with neighbouring countries, and generally benefit from governments acting as mediators amongst both national and international players and stakeholders by providing a platform that facilitates discussion and coordination across the full CO2 value chain. Financial risks to individual players should also be mitigated by treating CCS deployment as a common good; it helps manage the CO2 waste of Hungary, thereby contributing to placing Europe on the path to net-zero by 2050.

In a number of ways, Hungary is ideal for CCS deployment: the country has vast experience with injecting CO2 into geological formations due to its experience with Enhanced Oil Recovery (EOR). U nlike EOR (injecting CO2 into oil fields as a way to pump more oil out of the ground), CCS provides a real climate benefit by storing CO2 away from the atmosphere without supporting the extraction of oil  . At the same time, Hungary has significant geological potential for CO2 storage, mainly consisting of depleted reservoirs and hydrocarbon fields.

To kick-start CCS deployment, financial support for first movers is needed to lower risks. Platforms that bring relevant stakeholders around one table to facilitate discussions and coordination among them are also needed. There are several ways in which the national government can support CCS deployment in Hungary according to Hungarian stakeholders: through tax breaks and tax credits, green certification schemes, or public procurement procedures. Not least, due to the relatively small geographical area of Hungary and the long lead times of CO2  pipeline projects, stakeholders point to the need for support for multiple transport modalities, namely by road and rail – the importance of which Bellona has been highlighting in its campaign around the TEN-E and TEN-T Regulations .

CCS is not only a key technology to decarbonise the industrial sector across Central and Eastern Europe, but it is also an important just transition tool for the region by ensuring that those working in heavy industries are not overlooked in policies     and actions accelerating the shift towards a climate-neutral economy. CCS helps retain jobs and creates additional green jobs, aligned with the long-term vision of the EU and net-zero by 2050. What is more, CCS deployment offers a means to increase regional connectivity not only among CEE countries but also between North-Western Europe and the CEE region. Cross-border projects accelerating CCS deployment, such as the development of CO2 transport and storage infrastructure, increase the spread of technological know-how, foster international cooperation, and incr ease the economic development of the CEE region by furthering European economic integration.

At Bellona, we know that CCS technologies are absolutely crucial to achieving full decarbonisation across different industrial sectors, and we advocate for EU and national funds to be allocated to support EU-wide CCS deployment. While we encourage Hungarian stakeholders to make the first move so that Hungary can start deploying the technology, an important piece of the puzzle is recognition, support and available funds from both EU and the national government for the full CCS value chain.

Important strides have been made already, with one being the revision of the TEN-E Regulation including CO2 storage in addition to pipeline transport. The annual CCUS Forum by the European Commission is another important step. Moreover, the ongoing TEN-T revision is an opportunity to bridge one of the gaps cited by participants of the workshop in Hungary: by contributing to the deployment of additional transport modalities to pipelines, such as rail and truck.

Many thanks to Cambridge Econometrics Hungary and Energy Policy Group (EPG) for organising the workshop and inviting Bellona Europa to participate. We are also grateful to EEA and Norway grants for funding the CCS4CEE project.