The European Parliament brings back clear emissions reduction obligations to the table and upholds the environmental integrity of the EU Green Deal for upcoming negotiations with the Council and Commission.

Published on October 7, 2020 by Bellona Europa 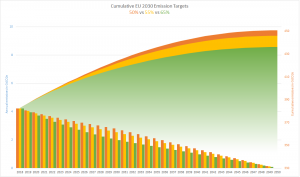 The EU Climate Law aims to ensure that the EU remains on track towards achieving the 2050 climate-neutrality objectives. The decision from the European Parliament bring back a clear emissions reductions obligations to the table and uphold the environmental integrity of the EU Green Deal towards the Council and Commission.

“The European Parliament vote on the EU Climate Law re-confirms that the EU Green Deal has to be a process informed by the climate emergency, by the demands of citizens and by the best available science. We are seeing a stronger Parliament than before, assertive on the climate front. This will be key in upholding the integrity of the 2030 climate target, which the Commission actively attempted to water down in their proposal. 60% is getting the EU to be an international leader by example in the implementation of the Paris Agreement.” said Suzana Carp, Policy Director at Bellona Europa.

What does the vote mean for Carbon Dioxide Removal? The Parliament does not want carbon sinks to be included in the 2030 target. This would give the Commission more time to develop a robust governance framework so that we can have honest accounting.

“Carbon removals are necessary to meet our climate goals, but we don’t know how much we can remove and we don’t know how to govern it so that removed carbon stays away from the atmosphere indefinitely. We need to tread a fine line so that emissions go down and reliable removals go up. A net target for 2030 essentially blurs the line between reductions and removals before we’ve even worked out how to reliably remove carbon.” said Mark Preston, Policy Advisor at Bellona Europa

Setting back the targets from a proposed 55% to at 60% gives an historic opportunity to decarbonize our economy by investing in clean technologies and innovation. The European Council will now have to discuss the EU 2030 climate target next week.

“Now is time to roll up our sleeves and begin making emissions cuts a reality. In addition to cutting emissions from electricity and transport, action on the climate footprint of our industrial activates will need to be accelerated. This will require immediate investments in reinvented low carbon industries to provide Europe with climate-compatible steel and cement while growing sustainable jobs and skills.  The EU has a central role to play in providing low carbon infrastructure essential to cutting emissions in industrial clusters. Trans-European grids will be needed to bring renewable electricity directly to manufacturing plants, while CO2 storage and hydrogen networks will be required to tackle stubborn industrial emissions.” said Keith Whiriskey,  Deputy Director at Bellona Europa.