EU Recovery Plan should put the money where the mouth is

As the European Commission releases its new EU Budget proposal with a €1.1 trillion 7-year plus a €750 billion recovery fund, Bellona Europa recognises the ambition of the package though highlightes more focus should be placed on enabling infrastructure. 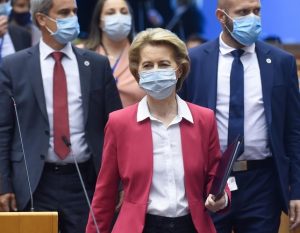 As the European Commission releases its new EU Budget proposal with a €1.1 trillion 7-year plan plus a €750 billion recovery fund, Bellona Europa recognises the ambition of the package though remarks that more focus should be placed on enabling infrastructure and existing green projects.

The dedicated part to The European Green Deal mentions the roll out of renewable energy projects, especially wind, solar while kick-starting a clean hydrogen economy in Europe. As well  funding for cleaner transport and logistics, including the installation of one million charging points for electric vehicles and a boost for rail travel and clean mobility in our cities and regions.

“Transport and industrial decarbonisation are the areas where the least progress has been made in these past years. We expect the European Commission to be accelerating in those two sectors. Enabling infrastructure should be a European task, if not the Commission’s main priority for Europe’s industry” said Jonas Helseth Director of Bellona Europa.

This package should be designed to go way beyond a recovery purpose, instead setting the path for a green transformation of the current economic system. The proposal talks about strengthening the Just Transition Fund to support re-skilling, helping businesses create new economic opportunities. Bellona Europa highlights that putting infrastructure development at the core, not only will allow to increase renewable energy generation, but will be securing and creating jobs, delivering a real just transition, especially in those key industrial regions which are waiting for a reconversion.

Recently Bellona Europa, together with seven other Environmental NGOs has elaborated 82 policy recommendations for a clean and responsible industry. “This is a moment where industry can be creative with the alternative green and clean technologies that already exist. Europe can start the ball rolling by making hydrogen, CO2 and clean electricity infrastructure available to European industrial heartlands.” said Keith Whiriskey Co-Director of Bellona Europa.

If the European Commission wants to commit and enable a green recovery, it can already find mouths to feed: “The projects in Rotterdam, Antwerp, Stockholm and Norway are examples of that. Technological solutions to decarbonising heavy industry already exist and key regions are awaiting for European support.” continued Whiriskey.