As UN annual climate talks convene in Doha, Kyoto’s future is on the chopping block

Fifteen years ago, fears about man-made climate change were enough to bind almost 40 of the world’s industrialized nations into forging a treaty that was flawed, but at least seemed to cement the principle that greenhouse gases must be cut.

Published on November 26, 2012 by Charles Digges 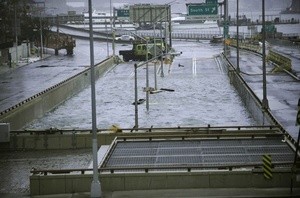 Now, with levels of those gases much higher and climate change more evident in extreme weather, economic slowdown worldwide and arguments over who should pay for mitigating what most seem to be accepted as the inevitable have all severely crippled any chance of a meaningful extension to the Kyoto Protocol, which runs out on December 31.

Some 17,000 participants representing nearly 200 countries are due to attend the latest round of UN climate talks Monday in Qatar’s capital, Doha, to at least debate extending the protocol.

What to do to bridge that gap between now and 2015, when world nations have promised to hammer out an all-country, binding emissions cutting treaty that will take effect in 2020 will be the critical debate at the current round of talks – and the debate looks to be shaping up as fierce.

“The Doha negotiations are difficult because the parties have agreed on several important issues on a general basis,” said Svend Søyland, Bellona’s senior adviser for international energy and climate isses, who is in Doha. “The final clarifications have to be pushed ahead.”

Bellona’s President Frederic Hauge, Søyland and others from the organization’s delegation are in Doha for the two weeks of talks.

Back to the drawing board on a new treaty

The scaled-back expectations for the Conference of Parties 18 (COP 18) marks a watershed turn since the 2009 talks in Copenhagen fell short of brining about a promised comprehensive treaty – leaving nations to make their own pledges.

For the first time, then, negotiators in Doha are not exclusively aiming for a fresh binding worldwide treaty to address global temperature rise that is already melting Arctic ice and permafrost, raising and acidifying the seas, and shifting rainfall patterns, which has an impact on floods and droughts.

“In Copenhagen, it was clearly an UN system with nearly 200 equal parties would not succeed to agree on a legally binding agreement,” said Søyland. “For us in Bellona was unfortunately expected.”

Instead, negotiators attending COP18 of the United Nations Framework Convention on Climate Change have been piecing together a new approach since Copenhagen’s failed talks.

Last year, in Durban, South Africa, countries agreed try again, giving themselves a deadline of 2015 to adopt a new treaty to replace Kyoto that would take effect in 2020.

Hence many in Doha – despite powerful resistance – will be trying to maintain the one climate treaty that does exist, making Kyoto, once a side issue in such annual talks, the center stage event.

They will also work on extending an agreement to help poorer nations braces for climate change’s impacts that also expires this year.

Russia, Japan and Canada, major economies that signed the Kyoto Protocol in 1997, have already said they will not sign up to emissions cuts beyond December 31, when the treaty expires.

“The weakness of the UN system stands in harsh relief when Canada can withdraw from the Kyoto commitment without any reaction other than pariah status,” said Søyland.

The huge developing economies of India and China, now two of the world’s top emitters, were never obliged to cut emissions under the Kyoto process – opting out of it as developing nations. The US also never ratified the treaty, leaving the world’s third biggest emitter out of international reach, citing it would not sign on unless then developing nations, like China, would.

US participation in extending Kyoto for the interim between 2013 and 2015 is said to be critical. Many hope that newly re-elected President Barack Obama – no longer under the apparent campaign trail gag order on the subject – will again talk about global warming, making the US more than a disinterested bystander.

Indeed, the US this summer became a poster child for climate change, with searing heat waves, droughts, wildfires, tornados, Hurricane Isaac and, most recently, Superstorm Sandy.

To top that off, even the world economic slowdown did not prevent greenhouse gasses from hitting a new record last year – jumping 20 percent over 2000, according to a UN report released last week.

The World Bank report said that even if all countries fulfill existing commitments, the world is on track to warm by 4 degrees Celsius by 2100 – more than twice the 2 degrees that the countries of the world say should be the limit – and dwarfing the 0.8 degree rise seen since 1900.

The choice of venue has surprised many, as oil-rich Qatar has some of the highest per capita emissions of carbon dioxide  (CO2) in the world.

A central divisive issue relates to the problem of “hot air” carbon permits. The derisory term refers to attempts by some wealthy countries to carry over unused carbon permits so they can be offset against future cuts.

Developing nations say this is unfair and reduces the value of any commitment to reduce CO2.

In Doha, developing nations want to see new money and a new commitment to cutting CO2 by the more well off. But some participants are concerned that, as a result of the Qatari hosts’ dependence on fossil fuel revenues, the host nation will fail to push talks in the right direction.

Other fault lines that negotiators will have to tread with care are a growing sense among poorer nations that the richer are not aiming high enough in their suggested greenhouse gas cuts.

The other is Russia, Japan, the United States’ and Canada’s refusal to commit to a Kyoto Two. They say such commitments would be meaningless as China and India refuse to commit to any emissions reductions targets at all. Yet China, India, Brazil and South Africa this week argued for an extension of Kyoto as “the essential basis for ambition.” with deeper cuts by rich nations – a commitment from which they would be exempt.

Søyland argued that India and China’s position was logical given their entirely revamped industrial status since Kyoto was initially signed.

“The urban middle class in such places as Mumbai, New Delhi, Shanghai and Beijing have a karbonavttrykk that exceed those found in countries such as Germany and Sweden,” he said, though added that China’s experiments with sub-national emissions ceilings and quota markets is encouraging.

Kyoto bound its signatories to cuts of averaging 5.2 percent from 1990 levels by 2008-12, but also established carbon trading mechanisms, which Russia, Canada and Japan want to preserve.

If Kyoto is allowed to expire in Doha, the world will loses its only legally binding climate plan beginning January 1, leaving nations on their own to come up with their own emissions cuts – included the European Union, Australia and the Ukraine, which account for just 12 to 14 percent of global emissions.

Likewise, it would leave the United States in the clear over its own voluntary pledge to cut 17 percent of its emissions below 2005 rates by 2020 – a unilateral move by Obama that was lauded for its aims but criticized for its lack of ambition.

Obama failed to galvanize support in the Senate for a more comprehensive climate bill that would have obligated the US to deeper cuts.

The EU has promised a cut in emissions of at least 20 percent below 1990 levels by 2020, with or without Kyoto, to drive its carbon market. It argues that cutting emissions makes sense to gain a lead in developing greener technologies.

Public commitment to the climate process

But many fear that much of the remaining momentum for a shift away from fossil fuels to greener energies such as wind and solar power may be lost, especially as the fight for any kind of economic growth has pushed green issues off the agenda.

Judging by previous conferences, the negotiations in Doha will ebb and flow, with progress one day being replaced by bitter discord the next. And in the end, after an all-night session, bleary-eyed delegates will emerge with some kind of face-saving “accord” or “action plan” that keeps the talks alive another year, but does little to address the core problem.

“It shows that leaders and also the public in these countries — the US certainly is one of them — don’t yet understand the full implications of the costs associated with the path that we’re on,” Alden Meyer, of the US-based Union of Concerned Scientists, told the Washington Post.