COPENHAGEN – Some 1,200 delegates from 40 countries have gathered in this city in search of a solution to put the breaks on global climate change in a conference featuring a look at clean energy technologies and energy efficiency that show saving the planet can actually be commercially profitable.

Published on November 26, 2008 by Anna Kireeva, translated by Charles Digges 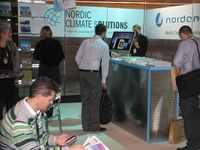 The annual conference on climate change was arranged by the Copenhagen Board of Ministers of Northern Countries as part of a effort to set midterm targets for reducing greenhouse gasses a year ahead of key UN Climate talks in Copenhagen.

A midterm target is crucial world economies, as it will be the core of UN negotiations for a successor treaty to the Kyoto Protocol, which expires in 2012. The negotiations are scheduled to conclude at the Copenhagen conference in December 2009.

Prior to that, delegates, climate negotiators and environmentalists will meet in Poznań, Poland at the beginning of December to start hammering out the brass tacks of the 2009 Copenhagen Climate meeting.

As evidenced at the Copenhagen conference this week, energy use and demand is on the rise. None of the conference’s participants doubted that human activity has had a strong impact on climate change.  There is further no single country in the world that can deal with the climate change problem on its own, and conference participants said a global partnership is required.

On an intergovernmental level, decisions must be made about investment strategies for the development of clean technologies. At the moment, these technologies are more expensive than traditional sources of energy – but without them, solving the climate change problems is impossible.

What is essential is introducing environmentally clean technology everywhere, and making its cost low enough in order to combat global climate change – this is the point on which participants of the conference must agree.

Economic crisis a poor excuse
While everyone was in agreement about the fact of climate change, but countries are hoping that it will be solved by someone else. European Commission countries have taken upon themselves the burden, but every country has its own excuse for not doing its own housecleaning.

“I don’t understand when governments, representatives of large industries or anyone else suggests that we wait on solutions to the climate change problem for economic reasons,” said Swedish Prime Minister Fredrik Reinfeldt.

According to Reinfeldt, the fight against global warming in the immediate future will take the form of clean technologies and energy efficiency. By 2050, the world must reduce its CO2 emissions by 80 percent from existing levels – and even further by the century.

But all countries must participate in this process and they must have adequate conditions and the obligations of each country must be fair.

Reinfeldt said that if all 27 countries of the European Union reduce their emissions by 20 percent by 2020, and China – the world’s biggest emitter – takes no action at all, then the reduction will be equal to all the emissions emanating from China in a year. As such, global measures are needed.

“I don’t really like tax policies, but I am an adherent of raising taxed on CO2 and traditional fuels,” said Reinfeldt.

Big bets on Obama
Signatories of the Kyoto Protocol are using their own measures to reduce their emissions by 30 percent of their needed volumes. The wild cards are the United States and China. If the United States doesn’t take on any climate cutting obligations, its justification will be that China hasn’t either.

Copenhagen conference participants during the first half of their first day of work referred hundreds of times to the now well-known environmental policies of US President-elect Barack Obama – and there are huge hopes resting on Obama following through with these policies.

“In a three week period, we have gotten a decision on a 30 year CO2 reduction by the United States,” said Denmark’s climate and energy minister, Connie Hedegaard.

“The period of George Bush, Jr, is a period that we Americans refer to as the ‘dark period,’ a period when the States renounced the climate change problem – that period has passed,” said Hunter Lovins, the president and founder of the Eldorado Springs, Colorado-based Natural Capitalism, Inc., and a professor of sustainable development at the Presidio School of Management’s MBA programme.

“We need to confess that climate changes are already occurring, that they are the result of human activity. We are now already succeeding in answering the global threat. But we have what is most important – all necessary technology for the solutions or an accounting of all aspects of the problem,” she said.

When speaking of dealing with global climate change in a videotaped message to a climate conference in California last week, Obama said: “Delay is no longer an option. Denial is no longer an acceptable response.”

According to Lovins – and as promised by Obama – the United States intends to invest $150 billion in the development of clean energy. By 2050, the Obama Administration plans to put the United States on track to slashing emissions by 80 percent by 2050 by developing clean and renewable energy, energy efficiency and creating conditions for the development of alternative fuel automobiles in the near term.

Save the planet – and make money
According to figures presented by American economists, the use of environmentally clean technologies and a shift toward energy saving technologies are profitable on any scale from small businesses to state economics.

According to Denmark’s Hedegaard, the development of environmentally clean renewable energy will create four times as many new jobs as will further reliance on traditional carbon-based fuels.

“Doing nothing will cost much more than we plan to spend on the battle against climate change today,” said Hedegaard. “We are talking primarily about dramatic consequences humanity will face. These include floods, droughts, water shortages, melting glaciers and so on.”

According to International Energy Agency data, the world’s temperature will rise by six degrees by the end of this century.

“We must not put off measures – the time to act is now,” said Hedegaard. “We must use all tools from government investment in clean energy to taxes on CO2 emissions and on the use of fossil fuels.”