Paula Dobriansky, the US Undersecretary of State for Democracy and Global Affairs, and chief US spokesperson on the issue of climate change and global warming, will meet with Bellona staff and other climate experts on a swing through Norway to prepare for the UN Climate Conference in Pozen, Poland in December.

Published on August 8, 2008 by Charles Digges 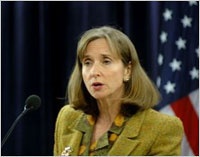 The Polish meeting will be the most important international gathering to precede international talks in Copenhagen next year, where nations hope to agree on a new climate agreement to replace the Kyoto Protocol.

Dobriansky will travel to the Poland climate talks as the United States’ chief climate change negotiator – a position that earned her some notoriety at the 2007 Climate Conference in Bali, Indonesia in December 2007 for her initial opposition to asking wealthier nations help subsidise climate change technology in the developing world.

It has been Bellona’s stated position that rich countries must help poorer countries take on the burden of installing initially expensive technologies built to combat climate change.

Dobriansky arrived in Norway on Thursday to meet with climate change experts to get advice on addressing issues of stopping Global Climate Change.

Among those she will meet on Tuesday are Fredric Hauge, Bellona’s president, Knut Alfsen, the director of CICERO, Hanne Bjurstrøm, Norway’s chief negotiator to the United Nations, Jan-Olaf Willums of Think Global and Oluf Ulseth, the European director for Statkraft ASA.

It would seem to be a meeting of strange bedfellows. Dobriansky has been a stalwart defender of the Bush Administration’s refusal to ratify the Kyoto Protocol, and has assisted the administration in blocking international agreements that would cap CO2 emissions.

Dobriansky has a record of advocating voluntary reductions in carbon dioxide emissions, based on partnerships between developing and wealthy nations, and has opposed caps that would require reductions based on specific timetables.

In Bali, Dobriansky asked to ‘please get out of the way’
Dobriansky – a long-standing neo-conservative politician, television pundit, and author in her home country – holds the dubious distinction of being booed at the Bali Climate Change Conference – at which Bellona’s Hauge was a celebrated keynote speaker.

During the conference, developing nations sought to strengthen requirements for richer nations to help poorer nations with technology to limit emissions and adapt to climate change’s impacts, the New York Times reported in January.

As head of the US delegation, Dobriansky objected to this notion, and was met with a chorus of long and loud booing – an event almost unprecedented at a diplomatic summit of this kind.

"But if for some reason you are not willing to lead, leave it to the rest of us. Please get out of the way.”

Following these remarks, Dobriansky declared that the United States would agree to the consensus and be involved in the climate treaty.

Bellona-Dobriansky meeting ‘gratifying’
In Oslo, the conditions for Dobriansky are more diplomatic and inviting.

“It is extremely gratifying that the US negotiations leader (on climate change) wishes to get input from Norwegian expertise in the climate question,” said Bellona climate and energy advisor Bjørn Utgård.

“There is no one that can invoke that they have all the answers to the climate question, but we need a common hunt for good solutions,” she said.

After her arrival on Thursday, Dobriansky was expected to travel to the Mongstad industrial complex, which just recently got the go ahead to build a carbon capture pilot project. She is also slated to meet with Norwegian Oil and Energy Minister Terje Riis-Johansen and Environmental Minister Erik Solheim.

The UN Climate Conference in Poland
Dobrianksy’s role will doubtless be a central one in the coming talks, which will set the stage for the Copenhagen talks to replace the Kyoto Protocol next year.

It is hoped that her visit to Norway will offer the US Undersecretary of State some alternatives to the views that have driven her previous international appearances on the climate change issue.