Confusion reigns in Russian government over signing of Kyoto Protocol

In an apparent and unexpected change of heart, Russian Deputy Economic and Trade Minister Mukhamed Tsikanov Tuesday dangled a hopeful sign that Moscow would sign the Kyoto Protocol when he announced that Kremlin may not only append its signature to the climate protection measure, but submit it to the Russian State Duma for approval next year.

Published on December 4, 2003 by Charles Digges 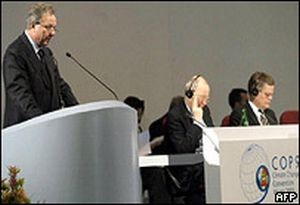 In contraction to statements made Tuesday by Andrei Illarionov, President Vladimir Putin’s chief economic advisor and a long-time opponent Russia’s signature on the Kyoto protocol, Tsikanov indicated Moscow was moving toward ratification of the treaty.

"As a major producer of carbon dioxide, Russia’s support is crucial to the treaty. Without it, the protocol cannot come into effect even if approved by every other eligible nation because only Russia’s industrial emissions are large enough to meet its target threshold," Tsikanov said in remarks reported by Interfax. "There are no decisions about ratification apart from the fact that we are moving toward ratification."

The statements were a contradiction of those made Tuesday by Illarionov—a long-time opponent Russia’s signature on the Kyoto protocol—whose office Thursday morning rushed to shoot down Tsikanov’s comments.

In its present form, this protocol cannot be ratified. It is impossible to undertake responsibilities that place serious limits on the country’s growth," said a spokesman in Illarionov’s office, who asked not to be identified by name, in a telephone interview with Bellona Web. The statement was an almost exact reiteration of what Illarionov had said Wednesday.

"There are no decisions about ratification apart from the fact that we are moving towards ratification," the spokesman told Bellona Web. "I cannot comment on statements from Illarionov’s office, but we do not have any information in the government about the fact that a decision has been made."

Signed-up nations watch Russia with anticipation
Signatory nations of the Kyoto Protocol are meeting this week and next in Milan, Italy, and are closely watching the Russian pendulum effect over whether Moscow will sign or not. Countries accounting for 44 percent of so-called greenhouse gas emissions have signed up for the protocol thus far.

But the protocol only comes into force if countries responsible for 55 percent of developed nations emissions approve it, meaning Russia—which emits 17 percent of the world’s greenhouse gasses—has the final vote as to whether the protocol will be adopted.

Illarionov has been one of protocol’s harshest critics in Russia, while the Economic Development and Trade Ministry has been one of its most ardent supporters. Putin has cast deep doubts on Moscow’s willingness to ratify it, but has not ruled it out entirely in public comments.

Tsikanov has optimistically said the government might submit the decision on the protocol to parliament next year, Interfax reported.

The ultimate decision as to whether Russia will ratify the document lies with the State Duma and with Putin’s signature on the law that would pass it. But Russia holds Duma elections on Sunday, and the new Duma will not meet until January.

Why is Russia tap-dancing?
But Putin dismayed an environmental conference two months ago by retreating from previous government promises to ratify, saying Russia needed to check if the pact would harm Russia’s economy. Since then, Kremlin officials, including Illarionov, have said Moscow wants guarantees from western nations that they would buy Russia’s substantial excess emission quotas—something permitted in the pact—if it does ratify the treaty.

It was remained unclear what was behind the mixed signals over the protocol in Russia, although some analysts have suggested they are a negotiating tactic meant to sap concessions from the European Union and Japan.

Most say Russia stands to gain from the pact because its industry has collapsed since 1990, when emission levels were set, and it has large spare capacity to trade in these emissions.

"After the US departure the economic effectiveness of the pact for Russia fell, but it does exist," Tsikanov said.

The United States pulled out of Kyoto in 2001 and said its own policy of promoting "breakthrough technologies" for energy was the "only acceptable cost-effective option" to limit greenhouse gases.