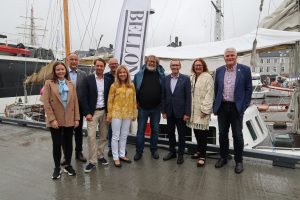 The Bellona Foundation and Sahara Forest Project join forces with Aker Horizons, The Norwegian Ministry of Foreign Affairs and a range of additional partners to establish an arena at COP27 in Sharm El Sheikh in November.

“Bellona is incredibly proud of having moved from the identification of problems to actively help solving them. I am looking forward to going to Sharm El Sheikh, and we will be bringing solutions together with our cooperative partners. To solve the climate crisis civil society and business must cooperate, and this is exactly what we will be doing in Sharm El Sheikh” said founder of Bellona Frederic Hauge.

“This will be a demanding summit, there is no doubt about that. This is also a COP set in Africa, where there will be an emphasis on loss, damages, and climate financing. An important part of the summit are the activities surrounding the negotiations. In a world facing acute climate and environmental crisis, looking at solutions is key” said Norwegian Minister for Climate and Environment Espen Barth Eide at the launch.

The main cooperative partner, the Norwegian Ministry of Foreign Affairs, also participated to the launch. State Secretary Bjørg Sandkjær emphasized the following in her engaging remarks:

“Climate affects everything we do, and we are working together with the countries who are feeling the effects of the climate crisis the most. It is good that we can help bring Norwegian stakeholders into the international dialogue taking place at these summits, you actually have to be there and this is work that is urgent. We will unite climate and development policy, and that is the superstructure of everything we do”.

“In light of the ongoing climate and energy crisis, international cooperation and solidarity is more important than ever. If we are to be successful in reaching the set climate targets of net-zero by 2050, closer cooperation between countries and between public and private sector is crucial. Aker Horizons is a driving force in the development of innovative and profitable green solutions for industry, and we are looking forward to contributing to progress in the important work on climate taking place at COP27 in Sharm El Sheikh, together with Bellona and the Norwegian government” said Marianne Stigset, Communications Director in Aker Horizons.

Sahara Forest Project was launched at COP15, 2009, in Copenhagen – and has participated to most of the climate summits arranged following.

“Sahara Forest Project looks at COP27 in Sharm El Sheikh as an incredibly important milestone to establish if the world community is on track to achieve the UN sustainability goals by 2030. We are going to Sharm El Sheikh to show decision-makers global and climate-smart solutions for how the world can produce food in dry regions, and how to green deserts”, said Managing Director at Sahara Forest Project Kjetil Stake.

Bellona was present at the very first COP, held in Rio de Janeiro in 1992. For COP27 Bellona and Sahara Forest Project have brought together a range of stakeholders including governments, business, academia and civil society.