Americans are at odds with Trump on climate change

As negotiators from around the world gather in Katowice, Poland to salvage the Paris Climate Agreement, there are signs that the American public seems to be warming to the notion that the globe is actually getting hotter, according to a recent poll.

Published on December 3, 2018 by Charles Digges

As negotiators from around the world gather in Katowice, Poland to salvage the Paris Climate Agreement, there are signs that the American public seems to be warming to the notion that the globe is actually getting hotter, according to a recent poll.

These new results suggest that average Americans are far more concerned with the state of the climate than their elected officials – specifically President Donald Trump, who has made the erosion of environmental regulations a centerpiece of his administration.

The poll, conducted by Monmouth University, and released last week, showed that nearly 8 in 10 Americans believe the climate is changing for the worse, causing the extreme weather and raging wildfires that have left the country reeling in recent months.

What’s more is that many of those worried that climate change is effecting the weather are republicans – the same political party as Trump, who has famously dismissed climate change as a “hoax” and has sought to withdraw the United States from the Paris Climate Agreement.

But Patrick Murray, one of the Monmouth pollsters, told the Guardian newspaper that recent climate-fueled disasters in America “have convinced folks that something is going on.”

Overall, 78 percent of those responding to the Monmouth poll said they believe a changing climate is behind such lethal weather events as Hurricane Michael, which ravaged Florida’s Gulf of Mexico coast in October, or this year’s California fires, the worst in history, which engulfed many of the state’s northern counties, driven by drought and heavy winds.

Of those surveyed, 64 percent were republicans, who said they now believe a worsening climate is to blame for intensified weather calamities. Only 49 percent of republicans said they believed in climate change in 2015, the last time Monmouth took its survey. 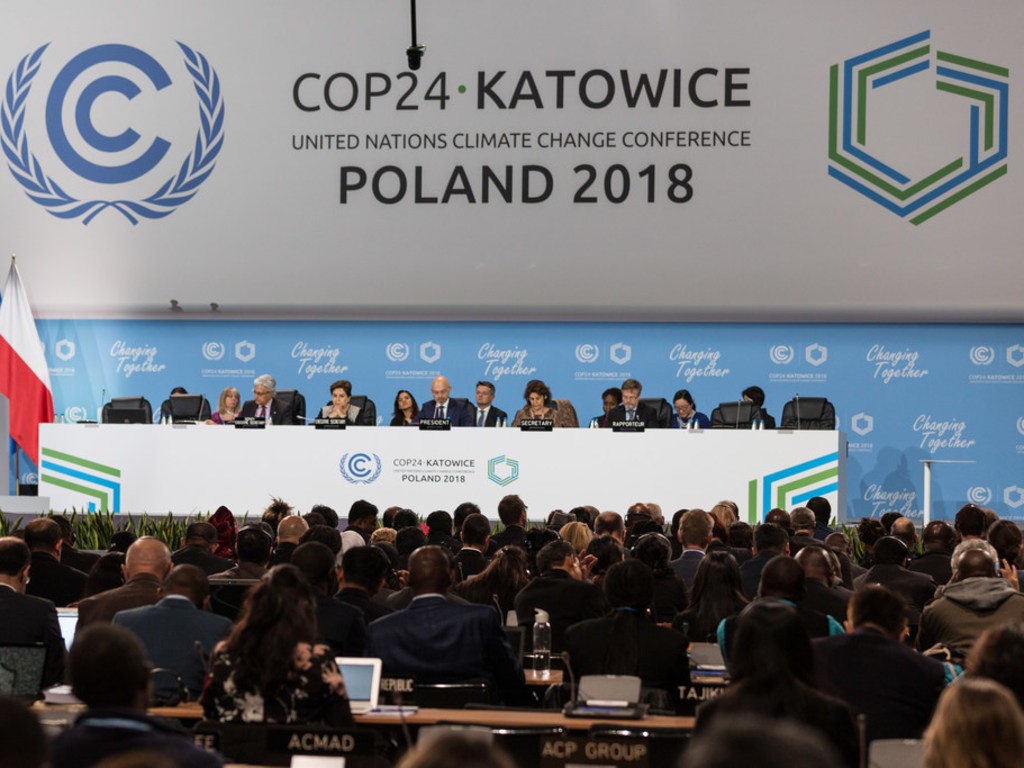 COP24, the two-week 24th conference of the parties of the United Nations Climate Change Convention (UNFCCC), started on Sunday in Katowice, Poland, with a special focus on carbon neutrality. Credit: UNFCCC

This new bipartisan consciousness of the threats of climate change, however, is unlikely to have much impact on the destructive environmental course Trump is taking.

Last week Trump’s own administration quietly released the Fourth National Climate Assessment, which warned that climate change will cost the US economy hundreds of billions of dollars.

The White released the congressionally mandated report in the midst of an American holiday weekend ­– apparently in the hopes that it would escape notice.

But its projections were too frightening to remain secret for long. Authored by 13 federal agencies, including 300 leading scientists, the report runs 1,656 pages and spells out how American agriculture will be devastated by rising temperatures, while its coastal cities will come under threat from more disastrous storm surges and rising sea levels.

Further afield, said the report, the US population will fall victim to food and waterborne disease. Those suffering from asthma will see their symptoms worsen. Increased ocean acidification will destroy sea life. Life spans will be shortened by pollution.

The report goes on to put the most precise price tags to date on the cost to the United States economy of projected climate impacts: $141 billion from heat-related deaths, $118 billion from sea level rise and $32 billion from infrastructure damage by the end of the century, among others.

Unless the country changes its practices and policies, the report warned, there will be “substantial damages to the US economy, environment, and human health and well-being over the coming decades.”

But Trump’s response to the data of his own government leaves little doubt as to what his administration will do to lessen the projected devastation.

“I’ve seen it, I’ve read some of it, and it’s fine,” he told reporters last week after the report’s release, adding, “I don’t believe it.”

Trump’s response is unsurprising. Since taking office, he has directed the Environmental Protection Agency to sharply weaken the nation’s two major policies for curbing planet-warming pollution: One rule that would restrict greenhouse emissions from vehicle tailpipes, and another that would limit them from power plant smokestacks.

He has also worked to promote coal and expand the use of fossil fuels that cause rising temperatures. And, of course, he has abandoned US commitments to the Paris Climate Accord, making America nearly the sole nation on the planet not committed to taking action against climate change.

But if the Monmouth poll shows anything, it’s that an overwhelming majority of American voters are not behind Trump and his policies of unraveling progress against climate change.

That is something that will matter in 2020, when Trump next runs for office. The American electorate does believe in climate change, and they want to do something about it. Trump might not be around for a second term if he won’t.