John Podesta to be featured Bellona guest at Arendalsluka

John Podesta, who helmed Hillary Clinton’s harrowing bid against Donald Trump in a roiling presidential election tainted by Russian cyber attacks, will be Bellona’s guest at Arendalsluka, which starts today. 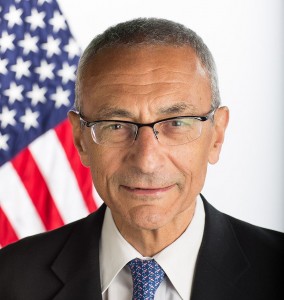 John Podesta, who helmed Hillary Clinton’s harrowing bid against Donald Trump in a roiling presidential election tainted by Russian cyber attacks, will be Bellona’s guest at Arendalsluka, which starts today.

Arendalsluka is Norway’s high-profile annual powwow of political, business and civil society leaders, each of whom have questions about how a populist, anti-environmental reality TV-star with no political experience could have ascended to the White House.

Podesta will be sharing his insights with the gathering on Wednesday during an NRK live broadcast from Arendal in southern Norway.

Prior to running the Clinton campaign, Podesta was a senior advisor to President Barack Obama, and served as Bill Clinton’s chief of staff. He is currently the chair of the Center for American Progress, a liberal think tank in Washington DC, which he founded in 2003.

In the Obama White House, Podesta helped orchestrate the US response to climate change, which culminated in the landmark Paris Climate Accord in 2015. Since taking office, Trump has aggressively corroded that environmental legacy, and in May, he announced that the US would pull out of the agreement, which every nation on earth but two had signed.

“Podesta is central to the design of Obama’s energy and climate policy,” said Bellona President Frederic Hauge. “He is still close to political life in Washington DC, and can offer unique insights into what is happening in American political life under Donald Trump.”

Indeed, Podesta is close enough to events in Washington to get Twitter-lashed by Trump himself. In July, Trump launched a blustery, error-filled attack on Podesta from the G-20 summit in Hamburg, Germany, accusing him of failing to turn over hacked Democratic National Committee email servers to the FBI and the CIA.

But Podesta, whose own emails were spilled to Wikileaks by Russian hackers, didn’t have the authority to give DNC emails servers to anyone: He headed the democratic presidential campaign, not the party’s national committee.

Podesta fired back at Trump, calling him a “whack job,” and urging him to “get a grip.” He followed up with an Op-Ed in the Washington Post entreating Trump to pay attention to the G-20 meeting and do his job as the American president.

Those gathering at Arendalsluka, amid the vacuum of US leadership on the international stage, would like some clue as to what sort of cohesive policy, other than boastful revenge, might eventually emerge from the Trump White House.

Unfortunately, for now, the only policy it has seems to be undoing whatever policy preceded it – and nowhere is that more apparent than in Trump’s abdication of climate polices Podesta worked to help craft.

Trump’s war against accepting climate change isn’t just stymieing the leaders of the world. At home, his administration has forbidden the Department of Agriculture from using the term “climate change” in their written work, telling officials there to say “extreme weather” instead.

Hauge has made no secret of his alarm since Trump’s election, and says discussions of US climate policy will be high on the agenda at Arendalsluka.

“It will be very interesting to hear what Podesta can tell about what’s happening in American climate policy,” said Hauge. “It probably won’t be a happy conversation, but we must know what’s happening.”

Podesta is expected by Norwegian media to be a big draw at this year’s Adrendalsluka. The gathered has gone on since 2012, and offers unique cross section of policy-makers, business and regular people to discuss and debate political and environmental issues.