Renewed vows to the Paris Accord can’t be derailed by a new US president, say analysts

More than 170 governments including the United States and China boldly declared an end to fossil fuels on Friday as they gathered at the United Nations to sign the milestone Paris agreement and renew their pledges to fight climate change. 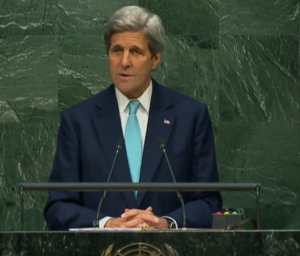 US Secretary of State John Kerry addressing the UN Friday prior to the Paris Agreement signing ceremony. (Photo: Still from State Department video)

NEW ORLEANS – More than 170 governments including the United States and China boldly declared an end to fossil fuels on Friday as they gathered at the United Nations to sign the milestone Paris Accord and renew their pledges to fight climate change.

The overwhelming support – the largest ever single-day turn-out for a signing ceremony – underscored strong international commitment to deliver on the promises made in Paris last December to avoid a climate catastrophe, the leaders said.

The question for now remains whether it will work – especially in the US during a bitterly divided presidential campaign.

In all, 175 nations signed the agreement Friday, the first day it could be signed. That is far more than had done so on a single day for any previous global agreement — but it still is also only a step toward the accord becoming international law.

For that to happen, at least 55 countries representing at least 55 percent of global emissions have to formally “join” or approve it within their national governments, some by executive action, others through legislative action.

That process alone could take into 2017, though U.S. Secretary of State John F. Kerry suggested late Friday that the goal could be within reach this year. The United States plans to join the agreement this year by executive action from President Barack Obama.

Even those who helped draft the accord acknowledge that its terms do not meet the goal it outlines to hold the increase in global temperatures to “well below” 2 degrees Celsius above pre-Industrial Revolution levels. Experts have said the current agreement would hold the average temperature increase to perhaps just below 3 degrees Celsius.

“If we were going to make the 2c or even then 1.5c we need actions – actions that include a cold war effort to stop deforestation, prevent new fossil generation, stopping the sale of fossil cars and real efforts on CO2 storage, industrial decarbonization and carbon removal,” he said by email. “None of this is as yet really happening. The intended nationally determined contributions of Paris get us to 3.5c plus . That world will have plenty of renewables and electric cars and cool stuff like that – but it will be a warm world.”

World leaders said Friday that that momentum has shifted, and nations can confidently invest not in fossil fuels that create greenhouse gases but in clean, renewable energy — and still be assured that their economies will grow.

Coal companies in the United States, for instance, are going bankrupt. Access to lower-cost solar and wind power is increasing worldwide.

How it’s playing on the campaign trail

The signing struck a nerve in the US Presidential campaigns, which many are watching closely to see who will pick up the environmental mantle that President Barack Obama will leave behind him.

Hillary Clinton, considered the front-runner for the Democratic nomination, turned down an apparent endorsement suggestion from Charles Koch, a US oil billionaire who has been instrumental in funding numerous political actions debunking climate change, Climate Home reported Monday.

Koch told ABC news: “it’s possible” Clinton would make a better leader than presumptive Republican nominee Donald Trump, and added “We would have to believe her actions would be quite different than her rhetoric. Let me put it that way.”

Clinton has often been accused of accepting cash from oil interests, but of Koch’s remarks, she tweeted that she is “in endorsements from people who deny climate science […]”

Trump’s position has long been that climate change is a hoax dreamed up by the Chinese to undermine American industry.

But some analysts suggested Friday that the Paris Accord is bomb proof even in the event of a Trump victory in November.

Pulling out of the 196-nation agreement would risk ruining America’s credibility within the international community, according to Elliot Diringer, executive vice president of the nonprofit and nonpartisan Center for Climate and Energy Solutions, told the Huffington Post.

Jeffrey Sachs, director of the Earth Institute at Columbia University and a senior adviser to the U.N., made a similar argument last week prior to the signing ceremony.

To back out of the agreement, “you [would] have to blow off the whole rest of the world,” Sachs told CNN on Friday. “And I don’t think [the U.S. would] find another partner to do that. You’d have to just be the renegade state.”