Vis menyen
Bellona.org > Latest News > Climate change > International climate conferences > Putin speaks the language of a climate convert, but do his plans back up his rhetoric?

Putin speaks the language of a climate convert, but do his plans back up his rhetoric?

Published on December 2, 2015 by Charles Digges 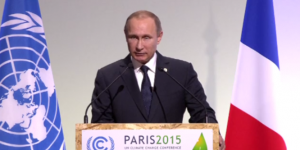 Russian observers interviewed at the summit haven’t missed Putin’s departure from his years-long mocking of climate change. At the 2003 World Climate Change Conference, he famously remarked that global warming would save Russians money on fur coats.

And where six years ago, former Russian President Dmitry Medvedev’s attendance at the Copenhagen summit was barely mentioned in domestic media, the Paris event is top of the pops on Russian State Television’s nightly news, said Yelena Kobets, who is in Paris from the Environmental Rights Center Bellona in St Petersburg.

With Russia now positioned as the world’s fourth biggest emitter  –behind China, the United States, and India – releasing more than 2 gigatons of greenhouse gases per year, it seems Putin had to say something. By another measure, based on emissions per unit of gross domestic product, Russia is one of the most carbon intensive countries in the world, according to Shift Project Data Portal, an aggregator of climate change statistics. China, India and the US aren’t even in the top 20, making Putin’s remarks an imperative.

His address to world leaders earlier this week, some Russian observers say, showed evidence that he wishes to stand in solidarity with other nations. Others remain deeply skeptical of his motives.

“It’s not a 180 degree turnabout from the president on climate change, but closer to a 90 degree turnabout,” Alexei Kokorin, energy and climate programs for WWF-Russia, told Bellona in an interview. “The science is showing more negative than positive for Russia, but [Putin’s plan] is not showing the huge emissions cuts we need.” 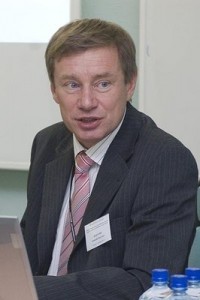 In his address, Putin forwarded claims that Russia’s efforts for the climate helped “delay global warming by almost a year.”

He struck a chord by saying he wanted to bring “breakthrough technologies into practice” to limit greenhouse gas emissions, and said that Russia would be in the forefront of energy-efficient development in the near future.

“Russia has been contributing actively to addressing global warming – our country is taking the lead,” he said. Then presented figures.

Under the Kyoto Protocol, adopted in 1997, Putin said Russia reduced its greenhouse gas emissions by 40 billion tons from 1990 levels – an amount almost equivalent to the entire global output of greenhouse gases today.

He pledged that over all, Russia would cut greenhouse gas levels by 70 percent from those levels by 2030. This would be achieved by a new agreement that would emphasize the role of Russia’s expansive forests as CO2 absorbers.

Putin also tabled Russia’s well-known pledge to cut emissions by 30 percent below 1990 levels, the baseline year in the Kyoto Protocol, where many other countries are basing their pledges on 2005, the baseline set by the 2009 Copenhagen Accord.

But 1990 is also when the Soviet Union’s emissions blasted off on a breathtaking ascent, only to nosedive with the failure of post-Soviet industry after the Union’s collapse.

That 1990 benchmark, many reports and observers have argued, sort of bakes the results: A glance at Russia’s figures compared to its current emissions levels – as measured by the US Energy Information Agency (IEA) – reveals that the Russian plan could see increases in greenhouse gas releases some 40 percent over today’s levels by 2030.

What does the plan actually mean?

The WWF’s Kokorin said such a spike prior to 2030 was unlikely because Russia’s emissions have plateaued at the levels presented by the EIA. He said Russia is currently hovering on target for a greenhouse gas reduction of about 28 to 29 percent.

The overall plan, said Kokorin remains somewhat scattered and “isn’t offering progress in greater strides than a standard five-year plan” he said in a reference to Communist economic planning.

“The plateau of emissions is good enough for now,” he said, “But the current situation only represents a one percent deviation from [Russia’s 30 percent] business as usual.” 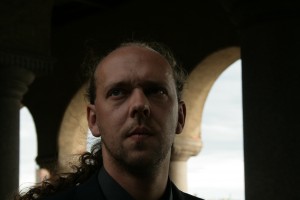 “For about 15 years, the government expects this to work,” said Kokorin. “Then, maybe after that there will be some movement on renewables and CCS [carbon capture and storage] with gas.”

By 2050, he said, the Russian government’s best case scenario plans would have an energy mix that draws 20 percent of its power from nuclear, another 30 percent from renewables and 50 percent from gas with the use of CCS.

“That’s how they see it now, but it seems to be under constant revision,” he said.

Ecodefense’s Slivyak said a 20 percent reliance on nuclear power by 2050 would be nearly impossible to achieve.

Today nuclear power accounts for about 16 percent of Russia’s mix. Slivyak said that a 20 percent reliance would require a new fleet of reactors to replace Russia’s aging units and would cost billions and take far too much time to meet goals for 2050. 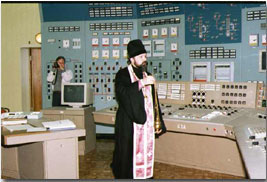 Instead of reactor builds, Russia is currently relying more in prolonged lifespans for reactors and power output upratings.

Slivyak wasn’t optimistic that renewable energy would pick up the slack. According to Bellona’s Kobets, one of the sticking points for a wider deployment of renewable energy is lack of Russian legislation supporting it.

“There is a gap in the legislation that has to be addressed by Russian lawmakers to make more solar, wind and other clean energies possible,” she said.

One place Kobets did say renewables were making a dent was in communities and regions where local governments have grown weary of waiting for Moscow’s green light.

The Murmansk Region has, for instance, purchased a new line of buses with more effective emissions filters, replacing some of its rickety, exhaust-belching fleet.

Other areas, like Rostov-on-Don and the Krasnodar Region are rethinking ways of burning domestic waste and trash. And Murmansk over the past few years has seen a growth in low CO2 power production units for small villages that rely on solar panels and minimal use of diesel generators for round-the-clock electricity. 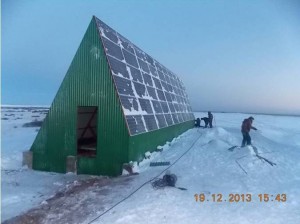 Unfortunately, Moscow rarely pays attention to such localized efforts, said Kokorin, because they are largely financed by small to mid-sized businesses.

“Renewables and efficiency could play big role, but for that to happen, there must political changes for which Russia is not ready at the moment,” he said.

Because of that, there will be a gaping energy gap that Slivyak predicts would have to be filled by fossil fuels.

“I think, unfortunately, that Russia will end up relying on fossil fuel because fossil fuel is less frightening to the powers that be than political change,” he said.