The COP21 finished last week with a 1.5°C target – this places renewed pressure on the EU to deliver quicker and bigger – beyond zero – emission reductions.

Published on December 15, 2015 by Bellona Europa 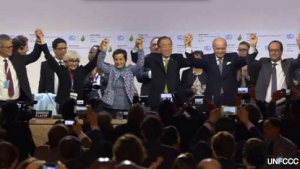 Bellona therefore calls on the Commission for the immediate establishment of a new advisory body on negative emissions in order to attain deep decarbonisation – Bellona President Frederic Hauge.

I will ask for a meeting with Commissioner Arias Cañete to discuss Bellona’s ideas to push this forward. The EU needs a new space to deliver the right solutions after the historical Paris agreement – Bellona President Frederic Hauge.

Commissioner Arias Cañete recognised the need for such work in his call for full decarbonisation, accelerated strategies and pathways during a Brussels press conference following the Paris climate deal.

Bellona has worked on carbon negative solutions since 2008 and calls on more actors to join this work. Delivering sustainable negative emission remains the greatest unanswered questions of the climate change challenge and one which we cannot afford to leave unanswered.