COP 21: Without twists or reservations, Bellona tells the truth behind CCS’s suboptimal pace of deployment

By securing the agreement of nearly 200 countries to limit global temperature rise to 1.5°C above pre-industrial levels, the two-week climate conference in Paris, COP 21, set a historic milestone in the UN climate process. Importantly, the attainment of this goal would necessitate the large-scale deployment of deep decarbonisation technologies, such as Carbon Capture and Storage (CCS). The Sheffield University-hosted event of last Friday, 11 December 2015, themed ‘Can carbon capture technologies really deliver on the aims of the UNFCCC?’ proved well-timed in bringing attention to the growing role of CCS in a 1.5°C scenario. Bellona Europa’s Director, Jonas Helseth, who featured as a panelist during the event, took this opportunity to point out the key obstacles in the way of CCS.

Published on December 15, 2015 by Bellona Europa 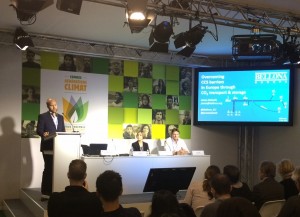 "We don't have the luxury to be cherry-picking technologies" - Jonas Helseth, Director at Bellona Europa

While Bellona hosted a series of events in the blue zone of Le Bourget conference center with the aim of bringing attention to the importance of CCS and Bio-CCS technologies in the climate mitigation portfolio, the only CCS event hosted within the publically accessible climate generations area was the Sheffield University event of last Friday 11 December. Among the panelists featured Bellona Europa’s Director Jonas Helseth and representatives from the International Energy Agency (IEA) and the Global CCS Institute (GCCSI).

The inconvenient truths about CCS

Speaking to a full room of new, but curious faces, Helseth took the opportunity of sharing Bellona’s views on the reasons behind the current status and sub-optimal pace of CCS deployment in Europe. “The EU is an interesting example of how not to do CCS” noted Helseth while pointing out that the carbon price observed in the EU’s Emission Trading System (EU ETS) has been too low and volatile to provide the commercial incentive to drive CCS deployment.

In addition to being failed by the EU ETS and its related funding mechanism, the NER300, CCS has been hindered by major utility companies, the very actors who had the power in their hands to drive the technology’s deployment forward. “Major utility companies who failed to adapt to changes in the energy market early on are now experiencing revenue losses and bankruptcy. Interestingly, many of these companies have been riding two horses: in other words, sporadic attempts to develop CCS alongside moves aimed at undermining these very attempts”.

Helseth also pointed out that many oil and gas producing companies have a stake in CCS but at best see it as an insurance strategy for their assets, and at worst as a threat to their bottom lines. “The CCS story is largely being told by people who have little credibility in the broader public and notably in civil society” Helseth added. Many of the institutions promoting CCS today have membership consisting of the above-mentioned companies, which provokes suspicion and undermines their ability to reach out beyond those already convinced of the need for the technology.

Building a societal case for CCS

Helseth emphasised that CCS is the only available option to attain deep decarbonisation of heavy industry sectors, such as cement and steel, which account for roughly 30% of global emissions and which have no renewable alternatives. Further to being the sole deep decarbonisation tool for heavy industries, CCS holds enormous employment potential and can help us in ensuring that climate policies do not become incompatible with having a strong industrial base in Europe, as this would undermine the political capital and will to take action.

“The problem is that these heavy industries are not in the room today when the future of CCS is being discussed” – noted Helseth. While the 5th Assessment Report of the IPCC, along with a number of other recent studies, confirms the need for CCS technology in keeping below the 2°C threshold, public acceptance issues have persisted. These, in turn, will not be overcome until we successfully build a societal case for CCS and reach out to a broader audience: “It is not what is being said that people feel uncomfortable with, but rather who is saying it. Conversation with the same people isn’t helping” argued Helseth.

It is critical that new voices enter the debate in favor of CCS, lest we fail to instigate the action now that will enable us to deliver full decarbonisation in coming decades.