On 8 October 2015 a worldwide group of geoscientists and engineers representing decades of research, presented an open letter to Christiana Figueres, the Executive Secretary of the United Nations Framework Convention on Climate Change UNFCCC, for the reassurance that geological storage of carbon dioxide (CO2) with relevance to carbon capture and storage (CCS) is safe, secure and effective – and can be backed up by considerable evidence.

Published on October 9, 2015 by Bellona Europa 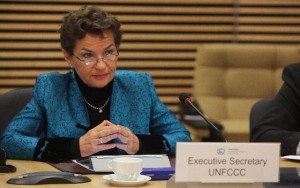 The letter states that “the knowledge and techniques required to select secure storage sites are well established, being built upon decades of experience in hydrocarbon exploration and production. A global capacity of suitable CO2 storage sites has been estimated at several trillion tonnes. There is also extensive experience of CO2 injection and storage in a variety of situations and locations around the world,” making it obvious that CCS application is a safe and essential tool to not exceed the two degree target of global warming the international community has agreed on.

“We must remain clear that the climate negotiations in Paris are just the beginning of a continued effort to combat climate change after Paris,” says Bellona Europa Director Jonas Helseth. “The Open Letter from the CO2 storage research community plays an important role in paving this path beyond Paris,” he continued.

A couple of weeks ago, Christiana Figueres, spoke in the European Parliament and warned that the current commitments of some states to the COP21 deal may not be enough to limit global temperature rise to two degrees celsius. The proposals currently on the table could amount to a temperature increase of about three degrees by the end of this century.

It is therefore imperative that initiatives like this letter showcase the technologies available for countries to reduce emissions. Australia stands out as a country where climate ambitions remain weak despite vast potential for CO2 reductions.

The need for CCS is clear, especially in the energy intensive industries such as cement, steel, refinery and chemicals. These industries have limited options to decarbonise as CO2 emissions are integral to the production process. As we will continue to be heavily reliant on these industries, CCS application will play an important role in their deep decarbonisation.

The letter emphasises that “tackling CO2 emissions from power generation and key industries is critical to delivering climate change mitigation in line with the UNFCCC’s objectives.”

As the IPCC has stated in its Fifth Assessment Report, attempting to limit global warming to two degrees without CCS is challenging. In this context, the letter to Ms Figueres is a timely initiative.