Published on December 10, 2014 by Charles Digges 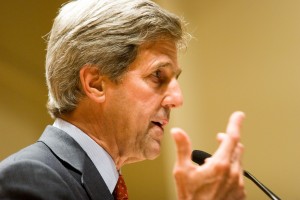 Officials in Washington have anonymously confirmed Kerry is expected in Lima on Thursday, the penultimate scheduled day of negotiations, The Hill, US Congress’s newspaper reported.

Kerry was instrumental in forging a deal with China last month by the two largest emitters of greenhouse gases. China set a target of 2030 for its emissions to peak, marking its first commitment to combat climate change.

The Lima meeting is the last full gathering of the United Nations countries before next year’s Paris meeting, at which they hope to finalize and sign an international pact to replace the Kyoto protocol, but little progress has been reported. With Kerry, the United States seems to be breaking out the biggest guns it has available – or is willing to commit to the fray.

Awaiting Kerry is the time honored squabbling over definitions of rich and poor nations, and what who is expected to commit to or receive.

Emissions were down about 10 percent but rose slightly last year and in early 2014 due to an “extraordinarily cold winter” that required high energy consumption, deputy US climate adviser Rick Duke said in response to a question from China, as reported by AP. He said emissions are projected to be down next year.

The US has also drawn fire from South African, who has questioned whether the US 2020 emissions target is sufficiently ambitious, and asked how much of America’s emissions drops since 2005 should be credited to economic recession.

According to the AP report, Duke said about two-thirds was policy-driven, while the rest were attributable to factors including the recession and a switch from high-polluting coal to natural gas in power generation.

The US Congress voted down a major raft of climate bills proposed by Obama in the days running up to the Copenhagen climate summit – where Kerry was also a prominent figure.

Obama’s legislative proposals gave the American delegation some credibility before the 2009 Copenhagen talks, but were later tattered in House and Senate committee until they were unrecognizable.

Since that time, Obama has been relying on executive power to shove many necessary measures through the US Environmental Protection Agency – like boosting fuel standards for cars and trucks, proposing stricter controls on carbon pollution from power plants and requiring that new fossil fuel plants be built with carbon capture and storage technology.

That has allowed some of Obama’s climate initiative to evade the Republican controlled House of Representatives.

But where the seeming promise of a brighter climate future in America lent it some legitimacy to the summit in Copenhagen, it’s unclear what Kerry will be bringing with him but more promises.

Among those promises are the White House’s new emissions ante proposed last month: A reduction of carbon pollution to 26 to 28 percent below 2005 levels by 2025.

With the recent elections installing a climate denying Republic majority in the Senate as well, this initiative is likely to die as swift a death as Obama’s 2009 proposals

Indeed, it is nowhere near certain the US can approve the more modest goal of lowering emissions by 17 percent below 2005 levels.

“Ultimately the U.S. must confront its profound political divide on climate change to provide certainty that it will meet its pledges,” Paul Bledsoe, who worked on climate issues in the Clinton White House, told AP.