Published on December 3, 2014 by Bellona Europa 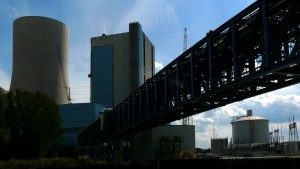 Bellona holds that farming out E.On’s fossil fuel portfolio to another company do nothing to mitigate continued carbon emissions into the atmosphere unless the German giant embraces Carbon Capture and Storage technology deployment – a process it has repeatedly delayed or even undermined.

UN leaders and other environmental groups hail the split as a remarkable step toward divesting in fossil fuels, an example they assert must be followed by others.

The German Klimaretter.info environmental news portal reported that E.On’s split into a main renewable energy company and the spin-off housing its fossil and nuclear divisions would occur by 2016. According to the portal, E.On CEO John Teysson seemed to hint the renewable sector would be headed in the direction of wind power. E.On says it will focus on wind power as its main renweable. (Photo: Wikipedia)

A historic turning point – for the better or worse?

In its expansive coverage of Teysson’s remarks, Klimaretter noted Greenpeace called the pending split of E.On “a historic turning point.” But nowhere did Teysson make any reference to what the company would do to mitigate climate problems that already exist thanks to its abundant legacy fossil fuel plants.

Bellona Europa director Jonas Helseth, who is present at the summit found that more than a little galling.

And he is skeptical that E.On’s fossil fuel split out move would do much to solve climate problems – or the company’s abysmal image relative to renewable and climate friendly energy development.

The December 1 to 12 UN Conference of Parties, or COP, in Lima opened with hopes that a UN deal to slow climate change is in reach for 2015, helped by goals set by China, the United States and the European Union to cut greenhouse emissions, mainly from burning fossil fuels.

But Helseth said the strategy “sounds pretty much like bad bank to me,” alluding to the split out of bad bank assets that followed huge government bailouts of financial institutions when the crisis of 2008 swept the globe. Bellona Europa Director Jonas Helseth delivers his speech on Bio-CCS at the GHGT 12 in Austin Texas in October. (Photo: Courtesy of Jonas Helseth/Bellona)

Helseth’s skepticism may not be out of line: He’s worked to change E.On’s approach toward Carbon Capture and Storage (CCS) technology in Europe for years – and seen them dodge and fumble over and over. He pointed out that CCS should be seen as an insurance strategy for their invested assets, allowing them to be used in the future when CO2 will be severely restricted.

Helseth said E.On “instead has gambled that restricting CO2 would be severely delayed, and therefore it has failed to take on the required adaptation toward a low-carbon energy future, including truly committing to a roll-out of CCS for their huge fossil assets.”

He added that E.On and the majority of other European Union utilities have yet to prove they are seriously committed to deep carbon cuts. “There’s now a clear risk that this bad assets spin-off will become a societal problem, just like the bad assets of the bailed-out banks. Their and other EU utilities’ failure to adapt to a renewable energy system, and to insure their fossil assets with ambitious CCS deployment, has landed them in a ditch like drunk drivers. Now they expect to be pulled out,” Helseth said, referring to the recent sorry economic state of the company.

“E.On with this move clearly hopes to disassociate itself with their own drunken driving, before their breath test goes public. They mean to keep the majority stake in the unabated fossil fuels, but under a different name,” he said.

“People should be aware that their current strategy is rent-seeking from EU governments for those bad assets, requesting capacity payments – government subsidies, or a permanent bail-out if you like – to keep burning coal like before, without emission restrictions. Burning like there’s no tomorrow”

“Bellona has for years been trying to help E.On, reaching out a hand for them to begin sorting out their bad assets with CCS,” said Helseth.

“They have so far disappointed greatly,” he continued, adding that E.On has even gone so far as to undermine EU progress on CCS technology by downplaying its success in other parts of the world, like Canada and the US, when speaking to EU policy makers. “It will be interesting to see what the other big [European] utilities like RWE and Vattenfall now do,” in the wake of the E.On announcement said Helseth.

“One thing is certain – even more so than for the ‘bad banks’: Separating your bad fossil assets to revamp your fossil image is not going to make emissions problems go away.”

Is E.On committed to going Dutch?

The acid test, suggested Helseth, would be whether E.On shows any tangible commitment to the ROAD CCS project in Rotterdam, the Netherlands’ giant CCS project that would sequester some 1.1 million tons of CO2 annually.

“If they do not now show real commitment by delivering the ROAD CCS project in Rotterdam […] then I think we can say ‘good riddance’ to them. In that case, allow me to share Bellona’s name proposal for their spin-off company: E.Off” Helseth concluded on E.On’s new PR line from Lima.

“I’ll rather spend my time here networking with those industry stakeholders who are willing and still able to change, said Helseth. “And should E.On end up proving themselves, they’re, of course, welcome to join”