Climate Summit Blog: The $100 billion circus is back, with distrust, definitions, dinosaurs and – dare we say – a new dynamism

LIMA, Peru – The UNFCCC COP20, or the 20th Conference of Parties to the United Nations Framework Convention on Climate Change for those unfamiliar with the tribal language, started here in Lima, Peru this Monday with few expectations.

Published on December 5, 2014 by Jonas Helseth 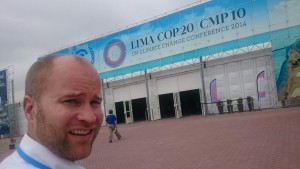 LIMA, Peru – The UNFCCC COP20, or the 20th Conference of Parties to the United Nations Framework Convention on Climate Change for those unfamiliar with the tribal language, started here in Lima, Peru this Monday with few expectations.

Having spent some days here talking with – and of course eavesdropping on – various countries’ negotiators, it’s clear that, as usual, there’s plenty of frustration around the place.

Many see this event as preparing the ground for a global agreement in Paris, France next year, and that above all means building confidence. That part certainly kicked off on a false note. The Philippines, having played a strong role in the so-called Like-Minded Group (developing countries insisting on keeping the rather obsolete set-in-stone division between industrial and developing countries dating from ’92) have now left that group.

Apparently, instead of facilitating negotiations toward a climate action deal that of necessity must include actions from most if not all countries in the world to have sufficient impact, the Philippine exit has increased suspicion and undermined trust. Several other members of that group have suggested the Philippines folded under pressure from the US and EU.

Apart from the matter of casting countries as “industrial” or “developing,” another major source of distrust remains the promise made by the (currently defined) industrial countries back in 2009 at the otherwise lamentably disappointing COP15 in Copenhagen, Denmark. That pitch promised financing from the industrial bloc to the developing world for climate action and, more realistically, adaption to the tune of $100 billion a year by 2020.

This Wednesday, the UNFCCC Standing Committee on Finance surprised everyone by suggesting this annual target is possibly already being met. Christiana Figueres, the UNFCCC’s executive secretary, claimed that richer nations (again, by the 2009 definition) have come a long way toward figuring out that thorny financing question. But the devil is in the details.

Public export risk guarantees, for instance, smell of brimstone: They are expected to release private funding amounts ranging between $5 and 125(!) billion. The climate credentials of some of this funding are questionable, leading to a further definition debacle. Upcoming reports are supposed to provide more clarity and narrow down the range, but there’s little reason to expect today’s positively framed message from Figueres to be a major game-changer in the negotiations.

What might though, is China. The world’s biggest emitter has for long hidden behind the same arguments as the said Like-Minded Group: Industrial countries must pay for their past sins; developing nations have the right to catch up in their development, necessarily entailing the right to emit more greenhouse gases into the atmosphere. In fact, China has been cast as this group’s Godfather.. This year however, in a historic deal with the US, China committed to curb emissions by 2030 at the latest.

While obviously far from sufficient, this is still a strong signal to the other Like-Minded that everyone would have to contribute. China, the world’s most populous country, must surely understand more than any what the Tragedy of the commons means. Through its deal with the US, China has de facto broken the deadlock in the battle of developing vs. industrial.

My personal suspicion is indeed that, in addition to the massive destruction the typhoon Haiyan left behind two years back – showing the urgency of climate action in a most violent and tragic way – the recent China-US deal, rather than US/EU pressure, is what has prompted the Philippines to end its Like-Mindedness. If one is serious about global climate action, the group’s stance simply no longer makes sense. And it can’t be too comfy avoid taking action against one’s imminent demise with a such bedfellow as OPEC-leader Saudi-Arabia.

Notwithstanding its symbolic importance, it’s clear that the US/China agreement does not even come close to approaching the required ambition level. It’s clear that those who expect a global climate action agreement in Paris next year that truly rises to our challenge will – again – be disappointed.

The EU will hardly get the US, China and others to agree on legally binding absolute targets. Some legally binding elements may well come across the finishing line, but a binding agreement that attains the 2 degree Celsius warming limit is not realistic. The world’s leaders simply will not be able to make the necessary commitments and decisions unless the technologies needed to execute them are readily available – and at a reasonable economic and societal cost.

Some of our NGO colleagues are passing their time here in Lima handing out the good old “Fossil of the Day” prize to the country deemed least helpful in the negotiations. A long-standing tradition that must be filling their Jurassic Park to bursting, it still doesn’t appear to have shamed anyone into changing their ways. The divest-campaign, or moving financial assets away from fossil fuels, is gaining momentum. NGOs play the time-honored ‘fossil of the day’ game: But does the ‘divest’ campaign that’s drawing so much attention leave a few dinosaurs eggs unaccounted for? (Photo: Jonas Helseth)

But even if the campaign is already doing a lot of good in directing investment toward renewable energy and energy efficiency, it won’t change the fact that the huge number of coal plants built in recent decades – notably but certainly not exclusively in China and India – won’t be shut down anytime soon.

Those fossil fuel-burning installations, which are keeping millions or even billions with electricity and heating and cooling, will keep on unabatedly belching CO2 into our common atmosphere for decades to come – unless we take action.

The Intergovernmental Panel on Climate Change’s (IPCC) recently published 5th Assessment Report confirmed what the Bellona Foundation has been advocating for more than two decades: Without CO2 Capture & Storage (CCS) as a means to remove emissions from these installations as well as countless other emission-heavy industries, the world will fail to manage climate challenge. This conclusion was recently echoed by UNECE, another UN institution, in its input to the UNFCCC. The world’s collective research expertise now states the crucial role of CCS as “unequivocally” as the reality of the climate challenge itself.

As Bellona has been promoting for years in Europe and beyond, CCS is moreover the only large-scale technology which, in conjunction with sustainable biomass utilization, can help us remove excess CO2 from the atmosphere: carbon-negative solutions.

While Greenpeace’s symbolic actions here in Peru and elsewhere calling for 100 percent renewables (while simultaneously opposing the use of biomass, making their scenario even less credible) are both impressive and commendably idealistic, it’s now high time for our NGO colleagues to accept a reality-check, embrace CCS, and help us promote it.

Denying the need for CCS is becoming as unacceptable as denying climate change.

Jonas Helseth is the director of Bellona Europa.