Countries call on the UN to support CCS development

On 21 October 2014 the United Nations Framework Convention on Climate Change (UNFCCC) Secretariat hosted a technical expert meeting on CO2 Capture, Use and Storage (CCUS). The meeting allowed Member States, international organisations, the private sector and other relevant stakeholders to share their views and experiences on options and opportunities to advance action on CCUS, explore barriers for scaling up action and propose options to overcome such barriers. A robust regulatory framework was identified as key to facilitating CCS deployment.

Published on October 27, 2014 by Bellona Europa 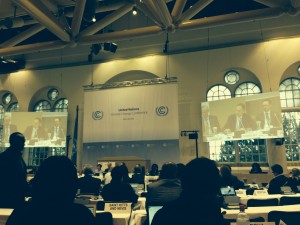 Bellona Europa, who attended this expert meeting, regards CCS as a crucial component of the fight against climate change and calls for a Paris agreement which would enable the deployment of the technology, to move through the demonstration phase.

Bellona Europa was also represented at the Cleaner Electricity Production Workshop and Stakeholder Meeting, which took place on the same day at the United Nations Economic Commission for Europe (UNECE) in Geneva, Switzerland, where Bellona Europa’s Director Jonas Helseth delivered a speech on the crucial role of CCS and EOR-CCS in cutting greenhouse gas emissions. Helseth’s contribution was also important in preventing some damaging inputs into the process, such as concerns about the absence of available technology for CCS in combination with lignite. Helseth referred to the world’s first commercial-scale CCS coal burning plant in Saskatchewan, Canada, whose launch he attended. In the lead up to this meeting, Bellona Europa contributed with inputs towards the UNECE Recommendations to UNFCCC on How CCS and EOR-CCS should be treated in a Post-Kyoto Protocol Agreement. Bellona’s recommendations covered a range of aspects including financial incentives for CCS deployment; establishing business models; as well as the electric power dispatch ranking.

The expert meeting in Bonn featured speeches by a number of prominent figures in the field of CCS. Olav Skalmeraas, Head of the Carbon Projects at Statoil, presented the Sleipner natural gas field experience with offshore CCS in Norway. He underlined the presence of a CO2 tax as the key driver behind the project’s success, which has proved that CO2 can be safely stored in the seabed. Skalmeraas called for the establishment of public-private partnership models in the short- to medium-run to facilitate industrial entrepreneurship and enable the standardisation of equipment needed to cut down costs of CCS deployment. In the long-run, however, he noted that a stable carbon price signal will be necessary. In reference to the Norwegian government’s decision to put on hold its first large scale CCS project at Mongstad, and instead direct funding towards the Dutch CCS project ROAD, Skalmeraas argued “It is not a matter of gas or coal, but rather of making the technology more standardised and efficient; it is about replicating and improving it. The funding directed to ROAD should, therefore, be seen as a positive signal to promote the CCS technology in general”.

“Issues do exist, but they are resolvable”

This was the key message communicated by David Hone, Climate Change Advisor for Shell, who referred to the government of Alberta as a successful example where the regulatory framework has been enhanced to accommodate CCS. Hone argued that the main barrier to CCS deployment is not technological, but rather regulatory. He emphasised the necessity of a multi-stakeholder step-by-step process to overcome regulatory barriers to CCS deployment. The presence of a carbon price of approximately EUR 12 per tonne of CO2­ and the significant government funding have acted to facilitate the business case for CCS in Alberta.

Tim Dixon, CCS and Regulatory Affairs Manager at the GHG Programme of the International Energy Agency, also emphasised the importance of a robust regulatory framework in ensuring site characterisation is done properly. Similarly, Scott McDonald, Director at Archer Daniels Midland, who presented on the status, drivers and barriers to CCS deployment in the US, highlighted the need for comprehensive policy and regulatory environments supportive of CCS as well as a long-term liability plan. He also underlined that CCS through enhanced oil recovery (EOR-CCS) is an important component of a business case for moving CCS forward. Andrew Purvis, General Manager at the Global CCS Institute, also acknowledged the importance of EOR in the short term to facilitate technology development, infrastructure development, policy and regulatory development as well as reduced costs. This, he argued, will ultimately lead to the development of geological storage of CO2­.

“We are talking the talk, but not walking the walk”

This formed part of Nauru’s persuasive statement, who expressed deep disappointment with the current, largely insufficient funding directed to promoting CCS. “Those who make money out of fossil fuels should have the moral obligation to spend more money on CCS” insisted Nauru’s delegate. He, furthermore, enquired on the reasons behind the failure of Norway’s CCS project at Mongstad and noted the strong contradiction with the country’s leadership status in the field of CCS. Nauru emphasised that the successful deployment of CCS requires that CO2­ stored remains underground indefinitely, which in turn means that States need to take liability for monitoring. Nauru called on the UNFCCC to work towards establishing global insurance schemes and international standards, as well as facilitating international collaboration to enable Member States to take shared liability for monitoring storage sites.

Majid Hasan Al Suwaidi presented the United Arab Emirates’ Green Economy Initiative and highlighted the importance of CCS as the country seeks to diversify its economy and invest in energy-intensive activities. He noted that fossil fuels will continue to be an important resource in the mid-term and that CCS is seen as a way of reconciling the UAE’s climate and economic growth objectives. Al Suwaidi shared experience from the Estidama Initiative, developed by Abu Dhabi, as a clear example of how public-private partnerships can deliver tangible results. He claimed that maximising production at depleted oil reserves will increase oil availability in the UAE and prevents the need for new drilling activities overseas. He also added that this, in turn, would buy them the time needed to develop renewables. UAE also shared its hopes of developing CCS projects eligible for funding under the Clean Development Mechanism (CDM).

Michael Monea, President of the Saskpower CCS Initiatives, remotely presented on the Boundary Dam CCS project. Monea outlined the lessons learned, and stressed the need to scale up CCS to reduce costs. In fact, he believes that Saskpower will be able to save up to 30% on construction costs for the next CCS plant.

During the discussions delegates raised questions touching on various aspects, including monitoring of storage sites; the possibility of re-using natural gas pipelines for CCS infrastructure; accessibility of funding by the least developed countries; and prospects for Parties’ collaboration on CCS under the 2015 agreement among others. Policy support, political will, and policy parity were the key elements participants called for to catalyse CCS deployment.