A St. Petersburg court has granted bail to nine activists from the Arctic Sunrise vessel, which led a protest against an Arctic oil rig in September, a day following the release of three Russians – one a journalist, another a medic – who were aboard the ship when it was seized by the Russian Guard on September 19.

Published on November 20, 2013 by Charles Digges 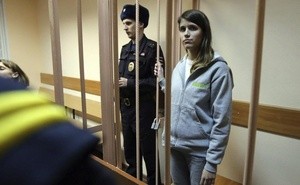 All 30 detainees from Greenpeace’s Arctic Sunrise  – representing 18 different nations – were last week moved from Murmansk to remand prisons in St. Petersburg, where authorities said they would have better access to lawyers and interpreters.

Greenpeace has cautiously greeted the news of the bail for the activists, and said it would make the money available as soon as possible.

But Greenpeace’s Kumi Naidoo said in a statement that: “We still have no idea what conditions our friends will endure when they are released from jail, whether they will be held under house arrest or even allowed outside.”

“We cannot be at all confident that the Arctic 30 are going home any time soon. None of them have passports, so as things stand at the very least they could be restricted to Russian territory,” Greenpeace spokesman Mads Christensen told the New Zealand television station, TVNZ.

“And they are still charged with at least one very serious offence which could see them jailed for many years. Nobody at Greenpeace is celebrating yet,” Christensen said.

Judges in Greenpeace hearings had previously agreed with prosecutors that the foreign activists in the case were a flight risk.

The Primorsky court did not say whether the nine could leave Russia while on bail.

No trial dates have been set, and 18 other crewmembers are expecting court rulings on their detentions.

The 30 people aboard the Greenpeace ship were detained in Russia’s Arctic in September for a protest of the Prirazlomnaya oil rig, owned by Russian energy giant Gazprom, in the Pechora Sea in mid-September. The rig is considered by the government to be a sacred cash cow.

The Prirazlomnaya is the world’s only oil rig in the Arctic and is expected to begin drilling by year’s end, despite questions about the condition of the rig itself – which is cobbled together from Russian and Norwegian scrap – and the Russian government’s absolute absence of a plan for dealing with Arctic oil spills.

On September 18, to activists from the vessel tried to scale the rig from rubber dinghies and hang anti-drilling banners. On September 19, the Russian Coast Guard, a division of the Federal Security Service, the successor organization of the KGB, fire 11 warning shots over the bow of the Arctic Sunrise.

Eleven armed agents then boarded the vessels by abseiling from helicopters, took control of it and towed it to a port near Murmansk.

Those aboard the vessel were there sentenced to two months remand, first under charges of piracy levied by the Russian Investigative Committee. The charges were later reduced to hooliganism, which carries a seven-year maximum prison sentence, but for which courts ordinarily levy fines.

Greenpeace has said it has yet to receive any formal notification that the piracy charges are off the tables.

The nine activists bailed out on Tuesday were named as: Miguel Orsi of Argentina; Camila Speziale, also of Argentina; Ana Paula Maciel of Brazil; Paul Ruzycki of Canada; Sini Saarela of Finland; Francesco Pisanu of France; Cristian D’Alessandro of Italy; David Haussman of New Zealand, and Tomasz Dziemianczuk  of Poland, according to the BBC.