What you need to know about the Doha UN climate summit

The 18th UN climate summit after the Rio Convention in 1992 ended in Doha on Saturday afternoon. Some 7000 government representatives from a total of 192 countries finally came to an agreement: the Kyoto Protocol of 1997 – which expires on january 1, 2013 – was extended for new phase from 2013 to 2020.

Published on December 12, 2012 by Magnus Borgen, translated by Charles Digges 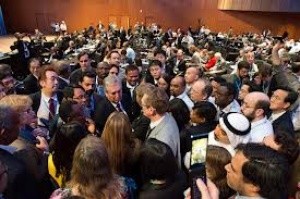 The agreement has been dubbed ‘Kyoto 2.’

Yet, it’s a timely question as to whether future climate summits will be the main arena for cutting global greenhouse gas emissions at the pace the world needs. The agreement in Doha will only cover 15 percent of current greenhouse gas emissions in the world, says Bellona senior adviser Svend Søyland, who was one of the approximately 6,000 other climate experts, NGO representatives and scientists who participated as observers to the negotiations.

Bellona was present in Qatar with seven of its experts at this year’s UN climate summit.

“Even if we are not satisfied with the deal, we see the importance of being present. Bellona organized a total of 17 so-called ‘side events’ in our delegation room, which was located next door to the official delegations to China and the EU,” said Søyland, who emphasizes that the arena is an important place to be so that Bellona can tend to its large internatonal network in forwarding the organization’s pragmatic and solution-oriented cooperation among researchers, industry and other NGOs.

About the progress of the talks, Søyland says: “Now Kyoto has been extend through a new period up to 2020. Besides the EU and the Union’s 27 member countries, Australia, Belarus, Kazakhstan, Liechtenstein, Iceland, Monaco, Norway, Switzerland and Ukraine quantified commitments on emission cuts [under Kyoto 2]”

He nevertheless pointed out that Kyoto2 will have very little impact on reducing greenhouse gas emissions by 2020 for the following reasons:

– There is a small number of countries committed to cutting its greenhouse gas emissions
– Emission obligations are less ambitious than what the world needs – but a process has been put in place to encourage these countries to tighten up their ambitions by 2014;
– Carbon Certificates that were counted in the first Kyoto period may be extended under Kyoto2 as representing actual emission cuts. Countries could apply unused credits to fulfill their obligations Kyoto2, and are allowed to sell up to 2% of those on the emissions trading market. Several countries, including Austrialia, EU, Japan, Liechtenstein, Monaco, Switzerland and Norway, however, have signed an agreement not to buy these emissions certificates.

Jonas Helseth, director of Bellona Europa in Brussels, was also present in Doha when the COP18 drew to its controversial overtime close on December 8th a little before 19:00 local time. Helseth summarized the main points of Kyoto 2 as follows:

• Switzerland has committed to 13.8 percent reduction in its greenhouse gas emissions under Kyoto 2. They had an  8 percent commitment under Kyoto1 but could only achieve about 2 percent.
• Other reductons figures agreed to under Kyoto 2 include: Norway at 16 percent, Monaco at 22 percent, Lichtenstein at 16 percent and Iceland at 20 percent

• Australia takes  a 0.5 percent reduction in accordance with the Kyoto 1’s 1990 baseline level. This may sound small, but in 2007 Australia’s emissions were 22 percent above 1990 levels, so they have little to work with.

• Belarus and Ukraine have set targets of 12 percent and 24 percent respectively. These targets should be viewed somehwhat tounge-in-cheek as both countries have produced emssions that are nearly double the 1990 level objectives.

• EC is as already known to have a 20 percent target, which therefore appears to be achieveable as early as 2015. Poland proffered its veto against shooting for 30 percent

.• In the hope that this may change, Kyoto 2 contains a “European clause” whereby Kyoto countries may announce tightened emissions goals by April 30, 2014.

• An Adaptation Fund that will provide money for climate adaptation in the third world will be partially filled with a 2 percent  tax on CDM projects. This tax will also be extended to JI projects and the sale of commercial paper with hot air.

• Japan, the US, New Zealand, Canada, Russia and others who refused to sign were thrown out of the CDM trading scheme.

• Japan, however, surprisingly signed and obligation not to act on hot air certificates.

Hopes for new and better deal from 2020

Getting an overview of any UN climate summit is no easy task. Aside from the some 7,000 official delegates from the 192 countries, there are an 6,000 representatives from various research and organizational spheres. Around 900 journalists have their hands full keeping track of 50 different parallel negotiation processes: LCA, ADP, REDD, Bali slot, Durban slot etc. It’s all about money, history, emissions, financing, CO2, rainforests, technology and soot particles to identify just a few of the overlapping debates.

“My highlight was when 25 countries in the Climate and Clean Air Coalition completely voluntary and on their own agreed on immediate action to reduce emissions of so-called short-lived greenhouse gases and other emissions contributors such as soot and methane. This is a shining example that it is possible to achieve climate results outside the UN consensus-demanding arena,” said Søyland.

The agreement between the 25 countries limits the release of harmful so-called short term greenhouse gasses that have a limited life in the atmosphere, but contribute to global warming.

‘What was particularly pleasing was that this [agreement] came about completely voluntary, and that it gained traction despite the fact that [these emissions are] not covered by Kyoto. Soot causes the melting and thawing of ice and snow in the Arctic to takes place faster, and also causes health problems in many countries” said Søyland, stressing that achieving agreements on greenhouse gases that are not CO2 is a great deal easier.

World CO2 emissions are increasing by 3 percent a year.

“The plan now is that a new global deal to be completed in 2015 and implemented from 2020,” said Søyland, who will be following closely when the international climate circus pitches its tent in Warsaw next November for COP19.

“One of the many challenges the UN faces is that many individual countries have a long way to go before adopting emissions targets or before they work out something you could refer to as a national climate policy. Around 20 of the world’s 50 biggest emitters have large gaps here,” said Søyland.

The Dominican Republic offers hope for the future

As the talks wound down, Bellona Europa’s Helseth posted on his twitter account a snipped of good news from a Dominian Republic delegate to the Doha conference.

“Start developing countries with quantified emissions targets,” tweeted Helseth on his popular account: “1st developing country emission target: Dominican Republic is obligatig itself toa 25 percent reduction by 2030 – from the 2010 levels! And is introducing a CO2 tax.”

Finally, you can view live pictures from the critical hours of COP18 here.