UN climate meetings in Doha dissolve into a co-op squabble

DOHA, Qatar – Delegates to UN climate talks in Doha agreed Saturday to extend the Kyoto Protocol, a pact that aims to curb greenhouse gas emissions from industrialized nations but will cover only about 15 percent of the world’s carbon output.

Published on December 11, 2012 by Magnus Borgen, translated by Charles Digges 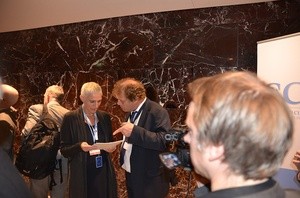 The outcome of the two-week negotiations, which nearly collapsed in their final hours in a dispute over how to compensate poor countries for the losses they will suffer as the result of climate change, underscored the challenge policymakers face in confronting global warming.

The hard decisions were put off, including how much major developing countries such as China and India will commit to cutting their greenhouse gas emissions and to what extent the richest nations will assist vulnerable ones over the next decade.

A slew of recent reports has warned that the Earth is on the road to dangerous warming levels with ever more extreme weather events like superstorm Sandy that struck the US east coast and Caribbean in October and the deadly typhoon that swept through the Philippines.

“The latest climate research is alarming, but political leaders are not able to deliver good enough results,” said Bellona President. “The climate conference] reminded me of a failed co-op meetig where different blocks and entrances push against each otherin emotional immovable patterns.

Hauge cast doubt over whether future climate summits are the right venue for pushing the greenhouse gas cuts the world desparately needs.

“We have to consider other venues. The summit here in Doha has been like a ski jump in slow motion. It tugged at the beginning and flailed above the hill caught in strong winds. And the skidding, bumpy landing was not worth an appreciative roar from the crowd,” said Hauge, but still gave credit to Norway’s Environment Minister Bård Vegar Solhjell for his management of complex negotiations.

“Bard Vegar Solhjell deserves credit for the effort he has put in Doha this week,” said Hauge. “He went into this with a proactive approach, and based on what he had to work with, one has to say he delivered in overtime.”

But Hauge addedthis does not absolve the coalition government completely.

“The last week’s disclosures relating to Norwegian cheating when it comes to the reporting of false so-called CDM credits to the UN must have consequences,” said Hauge. “The Norwegian authorities must be honest, and clean thigs up as soon as possible,” said Hauge, and singled out the Norwegian Finance Ministry to root out the scam.

Bellona has contributed to the climate negotiations since the first round of negotiations in Rio de Janeiro 20 years ago.

But in Hauge’s opinon, “the summits are coming more to resemble H.C. Andersen fairytale’s about the emperor’s new clothes.”

“All participants are captured in a common universe, and no one dares to point out the obvious absence of beautiful clothing,” Hauge continues. “Bellona now wants the same as the boy in the fairytale, namely a debate about whether many world political leader are in fact just standing there in their underwear while boasting about climate change.”

Hauge believes that individual countries and regions will form “coalitions of the willing” that will take a more dominant role in climate policy in coming years.

“Now we are ready to establish a fee for the carbon footprint associated with the production of goods, which will also apply to imported products,” said Hauge.

“We also have a completely different pace for funding and transfer of climate technologies, and will make great cuts in the short-lived greenhouse gases,” he said.

Hauge put particular emphasis on problems of local emissions of soot in the Arctic, which settles on ice and snow, and leads to even faster melting, and refered to the work of the Climate Coalition and Clean Air Coalition, which, in Bellona’s opinion, was the most significant outcome of the Doha climate summit.

“Another important point is that we must achieve a rapid liquidation of subsidizing both the consumption and production of fossil energy,” said Hauge.

“When one reads the latest climate research, one can see that subsidizing the oil and gas industry with vast sums is a parody,” he said. “The futurelies wih a commitment to clean reneable energy.”

Bellona found during the two weeks of the Doha confence that reality disillusions many of the delegates to the summit both from developed and developing nations. Even many seasoned international environmental activists now say that the UN process party meetings are becoming irrelevant.

“Apathy and indifference is the worst threat Bellona meets in our climate battle,” said Haugue. “The climate crisis can be solved. But it requires considerable thinking and political courage to take the plunge. New coalitions, new mechanisms, and new solutions can provide new energy and faster emissions cuts.”

He added that: “We need more holistic, innovative thinking. The world must use what it has too much of to produce what it needs more of. Our own Sahara Forest Project that was read for the climate negotiations in Qatar is an example of a new way of approaching the growing need for more food, more fresh water, more renewable  energy and sustainable production of biomass.”

“The Sahara Forest Project plant in Qatar, shows that it is possible to get climate solutions up and running much faster than anyone would think,” added Haugue. “It takes less talk and more courage and action. While many are grasping at straws, Bellona is picking cucumbers it grew in the desert,” sais Hauge