DOHA, Qatar – The 25 member countries comprising the Climate and Clean Air Coalition (CCAC) have agreed to reduce soot, methane and refrigerant gases in what Bellona’s senior international and climate advisor Svend Søyland said “is the greatest thing that has happened during the UN climate negotiations to date.”

Published on December 7, 2012 by Magnus Borgen, translated by Charles Digges 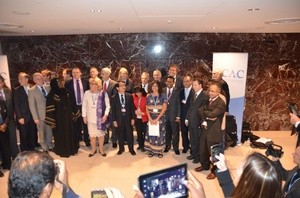 Seven billion people worldwide will be affected by what happens at the UN climate summit here in Doha. Negotiations are now in their last day, but there remain large rifts over financing for developing nations from developed ones to help them cut greenhouse gas emissions.

Yesterday afternoon Bellona participated for the second time as one of five non-governmental members in a meeting organized by CCAC here in Doha.

“Bellona has for many years worked actively to reduce severely damaging short-lived greenhouse gases such as soot, methane and refrigerant gases,” said an enthusiastic Søyland. “The past two years have seen extensive studies of the burning of agricultural waste and forest fires in Russia.”

“This is a voluntary coalition working to reduce emissions of short-lived greenhouse gases. The coalition has rapidly grown since its inception in February 2012, and Bellona actively contributes to the success of this very important work,”  added Søyland.

The success of the 25 countries in the CCAC is a stark contrast to the more rigid global UN negotiations, which for 20 years has unfortunately fallen short of achieving a worldwide treaty on global climate regulation. 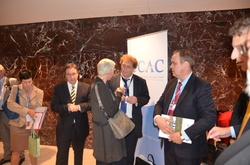 “The fact that the CCAC has strong support from US Secretary of State Hillary Clinton has obviously been very important,” said Søyland. He said her support played a crticial role in the World Bank’s announcement that it woud assign more funding to the Coalition’s projects for reducing short-lived greenhouse gases.

“The success of the CCAC represents a small but important respite of global significance,” said Søyland. “Member states can reduce global warming by 0.5 degrees by 2050, and although that is far from enough, this is one of the most positive things we at Bellona have observe during these two weeks at the summit.”

‘Coalition of the Willing’ at its best

Negotiating a new contract on the emissions of a small number of countries – the so-called Kyoto Two extension of the Kyoto Protocol that runs out on January 1 – will go into overtime.

“The Climate and Clean Air Coalition is therefore the big bright spot,” Søyland continued. “Here, the parties have gathered around the table a ‘coalition of the willing’ as opposed one divided by fixed fronts.”

Søyland is pleased that this turn of events will mean rapid emissios cuts prior to 2015.

Through its association with the CCAS, Bellona has learned there is postive talk of including two of the largest emitters – China and India – in the coalition.

“If the diplomatic talks lead to the Chinese and Indians, we could truly see a breakthrough in the fight against climate change, said Søyland. In 2013, the CCAS will seek to identify business models to put an end to the burning of agricultural waste and fires.

When soot falls on snow on high mountain peaks or in the Arctic, this means that the earth absorbs more solar radiation than it can deflect.

“By greatly reducing the extent of soot, we can eliminate millions of deaths related to global air pollution,” said Søyland. “We can also save millions of tons of crops, which are of great importance in a world suffering from food shortages.”
Achim Steiner, Executive Director of the UN Environment Program, chaired the meeting.

“These are additional measures to the climate negotiations. If countries are serious about a to a transition to a green economy and realizing sustainable development – as is the agreement related to the reduction of short-lived greenhouse gases – this is a very positive start,” said Steiner.

Some CCAC projects will focus on so-called Hydrofluorocarbon Gases (better known as HFCs). Phasing out these gases will be the same as cutting 100 billion tons of CO2 by 2050, representing an additional 0.5 degrees Celsius.

“Short-lived greenhouse gases are low-hanging fruit in the fight against climate change,” said Søyland. “The urgency is to pluck it down in time. This is considerably easier to achieve than global CO2 cuts because the bulk of our energy comes from the burning of fossil fuels.”
Yet Søyland is chooding not to celebrate the success of the CCAC in advance.

“This is like a ski jump,” he said. “We have great speed over the edge of the jump and have a nice flight over the hill, and then we’ll see what the impact is.”

“The world needs significantly more greenhouse gas cuts than the work of the CCAC can offer,” continued Søyland.

“ If we are to prevent global warming of more than 2 degrees Celsius, we must achieve a transition to a green economy. That means more aggressive cuts in CO2 emissions. And we must concentrate very hard on renewable energy from solar, wind, water and biomass and phase out fossil fuels. We need to reorganize the transport sector in a more environmentally friendly manner, and we must invest in carbon capture and storage,” said Søyland before quickly returning to the final hours of negotiations here in Doha.