UN Climate negotiations resumed Monday after a disastrously slow first week and hit a brick wall as richer and poorer nations clashed over whether the introduction of an extension on the Kyoto Protocol would allow nations who emissions had come in below their 1990 could trade them under a renewed scheme for the treaty.

Published on December 4, 2012 by Charles Digges 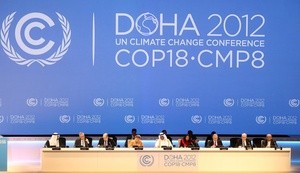 At stake is whether countries who might enter into a “Kyoto Two” would be allowed to carry over emissions credits earned during the treaty’s first period, which expires on January 1, 2013. A host of countries, including Russia, Ukraine and Poland accrued large surpluses, thanks mostly to post-Soviet industrial break in the 1990s.

But Russia in particular, though well under its Kyoto limits, has seen, a rapid increase of its industrial CO2 emissions during its economic rebound in the early 2000s.

Russia has in any case declined to join a second Kyoto period, while Ukraine’s position remains unclear, reported the Guardian. Both countries are thought to possess billions in carbon credits.

Poland’s particular issue is that it is part of the EU, which has agreed to sign up for a second period of Kyoto, and has pledges to reduce its emissions by 20 percent under 1990 levels – and said it will go even further to 30 percent should nations reach agreement over a new Kyoto period.

Poland is, however, adamant about maintaining its carbon credits, jeeringly called “hot air” by critics as they represent emissions levels that were reduced years ago, is dividing the European Union, which had said earlier it would sign on for a second Kyoto period.

Under Kyoto, Poland signed on cut its emissions by 6 percent by 2012 compared with 1988 levels. Its emissions are currently about 30 percent  below that 1988 baseline, but the country is a big producer and consumer of coal for power generation, and it has consistently balked at EU efforts to strengthen environmental legislation.

Poland is now driving a wedge into the EU’s united position that could dilute the bloc’s power as a driving force at the talks.

In an interview with the Guardian Newspaper, André Corrêa do Lago, head of the powerful Brazilian delegation strongly disagreed with Poland and other nations desire to grandfather their past carbon credits into a new phase of Kyoto.

“The second phase has to have environmental integrity, and you will not have that if countries are allowed to carry over [the credits],” said Corrêa do Lago.” The second period will be completely compromised. This is not a way to have effective reductions.”

Brazil wields influence at the talks as a moderator between the BASIC bloc of quickly developing counties – which, aside from Brazil, includes South Africa, India and China – and the group of developed nations, which have major differences many of BASIC’s positions.

Referring to Polands reluctance to enter a second Kyoto phase, Corrêa do Lago said, “”They are debating this inside the European bloc and we really hope that they will solve it in a way that gives environmental integrity. This is a loophole that means they won’t reduce emissions [as much as promised], so it’s a very strange logic.”

The Polish crisis is symbolic of the leitmotif that has emerged in UN Conference of Parities (COP) talks over the last several years, where poorer nations pressure wealthier ones to take on more commitments, only to be rebuffed in the 11th hours.

Many other nations are undecided as to whether a new Kyoto, which would run from 2013 to 2020 – by which year Durban’s COP17 summit last promised a new worldwide binding climate agreement – is the way to go, especially as it only accounts for emission reduction commitments of so 40 of the UNs nearly 200 nations.

It also eliminates the United States, who initially turned its back on the treaty for domestic industrial reasons, and China and India – now two enormous emitters – were excluded from it as developing nations.

And a new study released over the weekend by the UKs the Tyndall Centre for Climate Change Research at the University of East Anglia indicated the world has overshot its 1990 Kyoto emissions threshold by 58 percent.

This research follows dark warnings from other authorities in recent weeks, including the World Bank and International Energy Agency, that the world is headed for catastrophic levels of warming, of as much as 4-6C. Scientists say emissions must peak by 2020 to have a chance of holding warming to no more than 2C.

“This excessive focus on Kyoto, Kyoto, Kyoto, Kyoto, was fine in the 1990s,” Tim Groser, New Zealand’s climate minister told the Associated Press in Doha. “But given that it covers only 15 percent of emissions, I’m sorry, this is not the main game.”

But Corrêa do Lago argued that the second Kyoto phase was needed to give all sides the confidence to proceed.

“It is clear from the number of ship-jumpers that if we do not have a Kyoto protocol, things will go rapidly downhill,” he told the Guardian.

He said the number of countries taking on pledges under the continued protocol meant it would not be enough to cut emissions in line with scientific advice, but said it might be “enough politically” to bring developing and developed countries together in a new global agreement to succeed the protocol after 2020.

The development of political good faith – as opposed to making progress on a binding treaty – seems again to be the most important force guiding talks.

Indeed, as the Guardian reported, the UN has agreed to hold next year’s round of COP talks in Warsaw, a move seen as ironic as holding them in Qatar, which derives the bulk of its considerable wealth from oil and gas and is home to world’s highest per-capita emissions quotients.

“While it might seem ironic to some given Poland’s lack of climate ambition,” said Jonas Helseth, Director of Bellona Europa, “the fact that the next COP18 will take place in their capital – not in a small town like Poznan – might give Poland an incentive to ensure it does not become a failure”.

He continued with underlining that while the Qatari have the highest per-capita emissions, they also show a strong interest in developing climate technologies. “The Sahara Forest Project is a prime example of this,” Helseth said.