COMMENT: Is the US position in Doha really so unexpected – especially in light of shale gas and oil?

After remaining nearly mute on the topic of climate change on the campaign trail, Hurricane Sandy’s unprecedented bluster along the US eastern seaboard last month shook an apple or two of climate consciousness out of President Barack Obama’s tree, broadening hopes that the US would take a leading role at the UN Climate talks in Doha.

Published on December 6, 2012 by Charles Digges 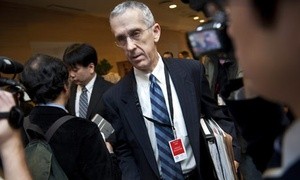 The hopes were premature.

Remarks from US climate negotiator Todd Stern Wednesday in his first public appearance at COP18 showed America’s refusal to make concessions at the talks and how little the country’s position has budged.

As the US negotiating team boarded the plane for the talks in Qatar – now deep into their second week – Jennifer Morgan, a climate expert at the World Resources Institute, offered a prescient preview of what others would be expecting from the US with Obama at the helm for another four years.

“I think there will be expectations from countries to hear a new voice from the United States,” she said – though didn’t add that the US could be expected to deliver on that.

So far it has not, and as Stern took his press conference yesterday, he did what he has done best at all the COP gatherings in recent memory: He lowered expectations.

He said – despite high expectations generated by Obama’s post Sandy activities – that he doesn’t believe there is a “different tone” in Washington when it comes to efforts to combat climate change.

Stern’s message to Doha was clear:  The US is unwilling to make significant concessions in the final days of this year’s global climate conference.

This should not have been the splash of cold water to Doha that it apparently was: Obama had long before announced the US was only willing to commit to a 17 percent slash in its greenhouse gas emissions by 2020 under 2005 levels.

‘If US is to become a leader rather than a follower, it should aim for at least a 30 percent reduction by 2020,” said Svend Søyland, Bellona’s international energy and climate advisor, who is in Doha. But being a lead in Doha is apparently not on the American agenda.

For environmental activists who have spent the last week and a half at the Doha conference waiting for a sign of progress, Stern’s press conference was yet another of many disappointments. They had placed great hopes in the US delegation, especially in Sandy’s wake.

With “Frankenstorm” – as Sandy was termed by US meteorologists – Obama seemed to have awakened from his pre-election climate coma, and received warm applause from traditional political opponents as being the one candidate who understood climate change.

But these endorsements by proxy did not equal an Obama who – thrown directly after his re-election a bitterly divisive tax code squabble on the domestic front – could make any promises of international value.

Activists around the world, who had interpreted Obama’s post Sandy actions to be a sign the US – the world’s second largest emitter after China – might not block a climate deal in Doha and commit to ambitious emissions reductions failed to read the fine print.

In his first post re-election press conference, Obama was clear that he would only promote further climate-protection measures if they didn’t hurt his country’s already struggling economy.

Add to that Stern’s remarks over the summer – during which the US saw staggering drought, wildfires, devastating, freakish tornadoes, and the shards of more than 2,000 all-time high temperature records shattered. Even after that, Stern said that while still hoping to limit global warming to 2 degrees Celsius, his position favored a “more flexible approach” than what he regarded as overly ambitious international agreements.

This is due in no small measure to the shale gas and oil explosion in the US – something that can so thoroughly fulfill America’s energy needs that much of the yield will be open for export. But the hydraulic fracturing techniques that come with shale gas and oil extraction are environmentally questionable, posing dangers to underground water sources as well as increasing risks of releases of methane, the most potent of the greenhouse gasses.

The US economy, therefore, has fewer incentive to join the international bandwagon in a search for climactically strategic technologies or agreements – certainly far fewer that it did in Copenhagen.

“Bellona shares the sentiments of several US environmental NGOs than US could do better than only reaping the benefits of energy shifts that are due to a stagnating economy, inproved fuel efficency standards and a shift away from coal to natural gas,”said Søyland.

Wednesday also saw both the US and the EU – a former driver in UN climate talks that has now fallen on deep divisions – dump their commitments to climate funding for poor nations, one of the primary  – and modest – goals of the Doha summit. The nations in need of the money say they could use $60 billion to deal with the already encroaching effects of climate change between now and 2015. The EU responded by turning out its empty pockets, and Washington insisted it was already “doing what [it] agreed to do.”

The conference’s second and more highly advertised goal of pounding out an extension to the Kyoto Protocol until 2020 – the year nations at the Durban talks last year promised to finish a worldwide binding emissions treaty – looks just as bleak as the treaty ticks out on January 1, 2013.

In comments published yesterday, Bellona’s Søyland suggested that the words trapped on everyone’s tongue, but which they fail to let pass their lips, is that a Kyoto Two would be outdated and irrelevant.

He also suggested that while an internationally binding agreement is the holy grail of the UN climate process, it is also “illusory.” Indeed, it took the world’s industrialized nations eight years to sign on to Kyoto, which accounts for a mere 15 percent of the world’s emissions. How long would it take to sign up everyone to similar, if not more stringent, cuts – especially when it is the developing world, the Global South, which has nearly zero industrial capability, that is taking the brunt of droughts, famine, rising seas and erratic weather?

A new study released during the Doha conference by the Tyndall Centre for Climate Change Research at the University of East Anglia shows that not only did Kyoto fail to keep world emissions under 1990 levels, but that the world overshot the 1990 baseline by 58 percent.

Thus, one can surmise, as Søyland suggests, that the time has come for nations to grab hold of any technological and legislative tool it can to mitigate, rather than fight, the effects of climate change. Initiatives like the Sahara Forest Project seem to be some of the only pragmatic steps in this direction.

It therefore seems a little disingenuous for so many observers to be passing the Kleenex box over Stern’s remarks. Dour as they may have been, they were nothing but a reiteration of America’s on-the-record policy – and a probably indication that America is betting its energy future on shale gas and oil.

It is not surprising that so much hope has been placed on Obama’s shoulders. His first term began as a green machine, and his early days in office at least hinted at guiding America out of its traditional climactic isolationism. But Obama can only go as far as Congress will let him. He cannot make international pronouncements that a largely hostile and distracted Congress will not endorse. Meanwhile, shale gas has become nothing short of the next energy revolution.

Giving Stern a good shellacking is therefore naïve and wasteful – especially when, as it seems – we are wasting time better spent building lifeboats on trying to right an already foundered ship.