The three jailed member of the Russian feminist punk collective pussy riot, whose appeal hearing was scheduled for today, will have to wait until October 10 to see if their two-year penal colony sentences will be shortened, Russian press reports indicated.

Published on October 1, 2012 by Charles Digges 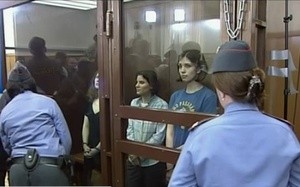 Nadezhda Tolokonnikova, 22, Maria Alyokhina, 24, and Yekaterina Samutsevich, 30, appeared at Moscow City Court for the appeal hearing but it was quickly adjourned until later this month because Samutsevich had fired her lawyer, Violetta Volkova, over an unspecified disagreement about her handling of the case.

The removal of Volkova will have no impact on the lawyers representing the other two defendants. Volkova, together with the other two lawyers Mark Feygin and Nikolai Pozolov, had unofficially represented the interests of all three women, although officially, they each had only one client.

Samutsevich ‘s father expressed puzzlement to reporters outside the courtroom. “I don’t know why this happened,” he said as quoted by Interfax news agency. “I don’t understand. I’m not in the loop.”

The delay was agreed to for Samutsevich to find a new representative. Prosecutors in the court, however, condemned the move as a stalling tactic.

In August, three members of the group were jailed for two years for staging a protest flash performance protest “hymn’ against President Vladimir Putin in Moscow’s Christ the Saviour cathedral, which the court deemed “hooliganism motivated by religious hatred.

The song, performed by five balaclava-clad women in short skirts in the cathedral on February 21 in a 40 second performance, bade the Virgin Mary to “get rid of Putin.”

While church security let the women go, the three that were sentenced in August were rearrested following Putin’s inauguration in March.

Appeal no overturn of sentence

The appeal was hardly thought to seek an overturn of the women’s convictions, and most of their supporters and legal staff had agreed that a six month reduction in their penal colony sentences was the best that could be hoped for.

The three women have become a cause célèbre in the West as the face of Russian opposition against new repressive measures enacted since Putin regained the Russian presidency for his third term in office in May.

International governments, human rights groups, and high profile rock starts including Madonna, Sting , Peter Gabriel,  Bjork, Tori Amos and the Red Hot Chili Peppers have taken up their cause. Amnesty International has declared them prisoners of conscience.  They have received markedly less support at home, where over 50 percent of Russians polled think they got the sentence they deserve.

The international support for the group, however, has also fostered irritation, being perceived among many Russians as foreign meddling in their justice system.

Prime Minister Dmitry Medvedev – while noting that Pussy Riot “nauseated” him – called for a suspended sentence for the band based on pretrial detention time served.

“The prolongation of their incarceration in the conditions of jail seems to me to be unproductive,” he said in a September 12 appearance. “A suspended sentence, taking into account time they have already spent [in jail], would be entirely sufficient.”

He carefully emphasized that, as a lawyer himself, he was speaking only his own personal opinion. He is the highest-ranking government official to speak for their release.

On Sunday, the Church said in a statement that though the women’s action “cannot be left unpunished” any acts of penitence and reconsideration of their actions “should not be left unnoticed,” RIA Novosti reported.

The church believes repentance will “benefit the souls” of the band members, the news agency said.

Their lawyers said in an interview on the independent TV Dozhd Sunday that their clients will not repent if it means admitting guilt.

“If they [the Church] mean repentance in the sense of a crime […] it definitely won’t happen. Our clients won’t admit guilt. A call for that is pointless,” lawyer Feygin told TV Dozhd.

The case has been watched closely by Bellona, and the organizations Igor Kudrik, said the sentence, as read out over three hours on August 17, amounted essentially to a conviction for “demonic dancing” and “blasphemy.”

Repressions highlighted by the trial

Bellona has also seen the case as a litmus test on how far Russian human rights have been eroded by a host of new laws signed by Putin, particularly his restrictive new law on NGOs receiving funding from abroad. The law forces such NGOs to register as “foreign agents” with Russia’s Justice Ministry, and apply the label on all their publications, Bellona included, or face heavy fines, closure and arrest. Rights groups like Memorial, which documents cases of government abuse in the Caucasus, and the Moscow Helsinki Group, have said they will not sign up as “foreign agents.”

‘Everyone’ a potential spy

A new bill to expand Russia’s definition of treason was also unanimously approved by the Duma late last month. The bill aims to expands the interpretation of treason to include activities such as financial or consultative assistance to a foreign state or an international organization – something striking directly at the heart of Russian NGOs that rely on foreign funding.

“After this bill is adopted as law, practically every citizen of Russia that works abroad or with foreign organizations could at any moment be hauled in on espionage charges because these laws actually state that the characteristics [defining espionage] are ‘furnishing financial, material, technical, consultative or other help to a foreign state, international or foreign organization,’” said Nikitin.

The new treason law was tabled the same week that the Russian government told the United States Agency for International Development (USAID) to shutter it’s operations in Russia by October 1, which will affect the operation of hundreds of NGOs operating in Russia that receive USAID funding.

One of those NGOs, the vote monitoring agency Golos, revealed wide-scale vote fraud in the wake of December’s Duma elections, whose results favored Putin’s United Russia party and sparked opposition street protests that were hundreds of thousands strong in Moscow and that lasted through Putin’s inauguration.

Putin said the protests were funded by the United States, which the US State Department denied.

The Duma also passed a law over the summer supporting heavy fines of $9000 – the average annual Russian salary – against protestors who are seen as behaving obstreperously.

Targeting opposition in the Duma

The Kremlin also appears to be rooting out opposition in the Duma. On September 14, the Duma voted to oust opposition deputy Gennady Gudkov. And on Friday, parliament voted to strip Ilya Ponomaryov, another opposition deputy, of the right to speak in parliament for a month starting on October 16, Interfax news agency reported.

The government has also sought to ban certain Internet pages, including YouTube, and has reintroduced libel and “defamation” as a offences punishable by prison.

Putin himself has had offered little comment on the Pussy Riot case, saying he does not wish to influence the court.

In August, he said he hoped the band would not be punished too severely. Immediately following that, the prosecution dropped its sentencing request from seven years to three. Judge Marina Syrova went further and reduced the sentence to two.

Following the appeal, it is expected the three women will be sent to three separate penal colonies, Interfax reported. Two other band members are said to have fled Russia.