One member of the Russian punk collective Pussy Riot was freed on appeal on Wednesday, but a Moscow court upheld the two-year penal colony sentences for two others that were imposed for a raucous cathedral protest against Vladimir Putin, who said in a televised interview earlier this week they had got the jail terms they “wanted.”

Published on October 10, 2012 by Charles Digges 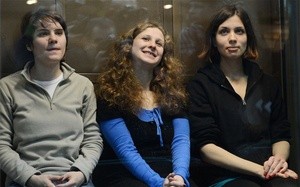 There were cheers in court when the two-year jail term of Yekaterina Samutsevich, 30, was suspended, video of the courtroom proceedings showed. Samutsevich, with her co-defendants, Nadezhda Tolokonnikova, 22, and Maria Alyokhina, 24, have been behind bars for six months.

Samutsevich’s two co-defendants, said the court, would serve the rest of their terms. The other band members nonetheless cheered and hugged Samutsevich when the decision was read out.

“I have mixed feelings,” Samutsevich told reporters outside the court, where she was greeted by applause and whistles from a crowd of about 150 people in the rain. “I’m happy, of course, but I am upset about the girls.”

Defense lawyers, relatives of the women and rights activists including the chairman of Putin’s own presidential human rights council, Mikhail Fedotov, criticized the split ruling.

“All three of those convicted in this case could certainly be given suspended sentences and that would be right,” Fedotov said, according to Interfax news agency, echoing sentiments voiced by Prime Minister Dmitry Medvedev last month.

Samutsevich had at the scheduled October 1 appeal hearing announced that she was firing her lawyer, delaying the appeal verdict until today.

Her sentence was suspended by the appellate court because her new lawyer argued that she had been removed by church security before she could get her guitar out of its case, and thus didn’t take part in the 40-second punk hymn imploring the Virgin Mary to “get rid of Putin” that Tolokonnikova and Aloyokhina – both mothers of young children – will remain jailed for.

Five members of the band were removed from the church following their flash performance, but none where arrested until Putin was elected in March. Тhe two remaining members who were not arrested are said to have fled the country.

Bellona: how far will the rights abuses go?

Indeed, in the eyes of many observers, including Bellona’s Igor Kudrik, the three were jailed for what essentially amounted to blasphemy and “demonic dancing” as evidenced by language in the three-hour long original verdict in the case read out on August 17 – and not for “hooliganism inspired by religious hatred.”

Bellona has also seen the case as a litmus test on how far Russian human rights have been eroded by a host of new laws signed by Putin, particularly his restrictive new law on NGOs receiving funding from abroad, and requiring them to register as “foriegn agents,” branding them as spies and undermining their authority with the Russian public they serve.

For years, under Putin, the Russian regime has imposed onerous bureaucratic and financial requirements on civil society organizations. The government has failed to address, and – some allege – been behind a terrifying pattern where investigative journalists and human rights activists are turning up dead.

Last month, the Putin government kicked out the United States Agency for International Development, pulling the rug out from several vital civic and human rights groups that depended on its funding. Less visibly, the government also recently moved to broaden its laws on treason, establishing a framework that could be used to charge human rights defenders with treason against the state. At the same time, a domestic opposition movement is stirring, with more public protests occurring in the country during the last year than in the previous decade combined. When viewed through that prism, the activists of Pussy Riot are anything but accidental.

Defiance early in the day

Earlier in the appeal hearing the trio spoke defiantly, saying their protest song was political and not anti-Church. In emotional statements from a courtroom cage during the appeal hearing, the women from the band said they had not meant to offend the faithful but to criticize Putin, who opponents say has cracked down on dissent since starting a his third Kremlin term in May.

“We’re all innocent… the verdict should be overturned. The Russian justice system looks discredited,” Alyokina told the three judge panel.

She said the trio’s apologies had been ignored, but repentance was out of the question.

“For us to repent – that’s unacceptable, it’s a kind of blackmail,” she said, adding that repentance was a personal matter, unconnected with a legal case.She added she had “lost hope in this trial.”

Tolokonnikova told the court that, “it’s as clear as daylight that this was a political act, not anti-religious […] I ask you to quash this sentence”.

One of the defense lawyers, Mark Feygin, said “we’re glad that Yekaterina Samutsevich has been freed, but we think the other two girls should also be released”.

The appeal process for the other two band members would continue, he said.

“It’s right that they were arrested, it’s right that the court took that decision, because you can’t undermine the foundations of morality, our moral values, destroy the country. What would we be left with then?” Putin said, adding they “wanted” a guilty verdict.

Sympathy for Pussy Riot is limited in Russia. International governments, human rights groups, and high profile rock starts including Madonna, Sting , Peter Gabriel,  Bjork, Tori Amos and the Red Hot Chili Peppers have taken up their cause. Amnesty International has declared them prisoners of conscience.

The international support for the group, however, has also fostered irritation, being perceived among many Russians as foreign meddling in their justice system.

Orthodox Church Patriarch Kirill – who had close ties to Putin – has cast the protest as part of a concerted attack meant to undermine traditional Russian values and curb the church’s post-Soviet revival.

As such, the Duma – where the Kremlin-friendly United Russia party holds sway ­– is considering stiffening punishment for offending religious feelings, and Putin has warned that such offences against Christians, Muslims or other believers in diverse Russia could incite violence.