DURBAN, South Africa – On the eve of the 17th UNFCCC conference’s High-Level Segment, ecological non-governmental organizations that are on site observing the ongoing climate negotiations urged ministers to take real action to reduce emissions in the Land Use, Land Use Change, and Forestry (LULUCF) sector. 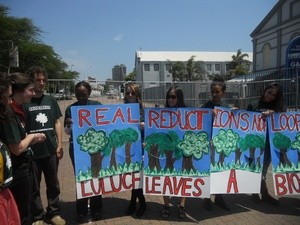 More than a week into the Durban talks, issues of the forestry sector are yet to be addressed by the Russian delegation. What many other countries cherish and appreciate as one of their most valued assets, Russia evidently considers to be a matter undeserving of any special attention.

During previous UNFCCC conferences, Moscow made sure it was heard on one of its staunchest positions – that recognizing the role of Russian forests in reducing global greenhouse gas emissions was among the main conditions for its participation in any subsequent climate agreements. The Russian delegation would lend its official support to numerous side events dedicated to boreal forests – Russia’s national treasure that accounts for 23 percent of the global forest resources.

This time around, however, Russia has removed itself from any discussions on the subject. Meanwhile, negotiations revolving around the forestry issues are turning into an increasingly heated debate, fueled by such incendiary moves as the proposal to count all forest fires as wildfires.

Where the LULUCF regulations are concerned, the issue of wildfires, as NGO observers have pointed out, is one that falls dangerously through the cracks. The adoption of such a proposal could lead Russia and other countries to fall into a state of relaxed amnesia with regard to the gaping holes in their own forest management legislations and practices. While the authorities linger to take action, natural phenomena – winter’s snowfall and heat waves in the summer – are growing into natural disasters, plaguing Russia with every change of season. Is that why Russia is keeping silent?

Forest management – another pitfall that hinders progress in the LULUCF sector – is a sore subject for Moscow. Russia still does not have a national forestry program, and without it the existing Forest Code remains, at best, a set of loopholes for the timber industry to profit from, and millions of roubles spent on fire prevention and firefighting equipment equal millions of roubles thrown to the wind.

“Each year, we are seeing an increasing number of fires in the area of permafrost,” said Andrei Laletin, of the Global Forest Coalition. “This year, fires destroyed much more forest than the previous year. And most of the fires were due to anthropogenic rather than natural causes. They resulted from the collapse of the forest management system.”

This might explain why Russia is being so reticent about a subject it earlier placed such a strong emphasis on – lest it also has to talk about the real causes of the unprecedented wildfires that have raged through Russia in the past few summers. Or about the fact that when forests burn in the permafrost zone, one of the consequences is the release of methane – a greenhouse gas that is 60 times as aggressive as carbon dioxide. Or the risk that not only Russia’s well-being, but that of the world community as a whole will be severely affected if the problem of wildfires is not properly addressed.

Without due attention, prompt measures, and continued state support, Russian forests could turn from a powerful emissions sink into a dangerous emissions source within forty or fifty years. If climate texts only focus on saving rainforests and make no room for efficient solutions for boreal forests, Russia’s green treasure could soon become little more than an immense pile of firewood. Surely, a problem like this calls for something more than the silent treatment.

This English translation and the accompanying image were originally published on Below 2C, a newsletter maintained by Russian NGO observers at UN climate talks, and are reprinted here with their permission.