Nuclear energy has no place in future climate agreements

DURBAN, South Africa – “Stop using nuclear power! You [are killing] the future!” was the message a group of young Japanese anti-nuclear activists delivered to the COP17 delegates during an action staged in front of the summit’s negotiations building. The banners they unfurled read “No more radiation!” and “NPP=No future.” 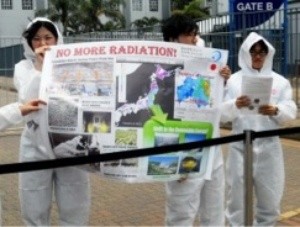 The posters the activists held showed pictures of the destroyed Fukushima Nuclear Power Plant (NPP). Last March, the plant was hit by an earthquake and a devastating tsunami wave, which knocked out the plant’s cooling systems and caused multiple core meltdowns, exposure of spent nuclear rods in the cooling ponds, and massive releases of radiation. Efforts to bring the stricken plant under control are still ongoing, but the largest nuclear catastrophe since Ukraine’s 1986 Chernobyl explosion has resulted in severe contamination of whole areas around the site, rendering them uninhabitable, and evacuation and health consequences for thousands of residents – the tragic account of an irrevocable disaster that the activists in Durban sought to bring once more into view.

Their leaflets urged the conference to refrain from the temptation of considering nuclear energy as a tool to combat climate change and to direct more efforts toward the development of renewable energy sources.

The activists’ sentiments are shared by most of UNFCCC participant nations, which is why nuclear energy has so far been kept out of the existing climate instruments. Still, certain countries – including, sadly, Russia – do not make a secret out of their loyalty to the dangerous and outdated monster. Nuclear power plants, these countries insist, produce cheap energy, and the risks are hypothetical and largely overrated.

Meanwhile, the dreadful tally of nuclear accidents and disasters is growing – Russia’s 1957 Mayak and Ukraine’s Chernobyl, the 1979 Three Mile Island meltdown in the US, the Windscale fire at Britain’s Sellafield in 1957, and now Fukushima. And calling nuclear power cheap defies every fact that is known about NPP construction and operation.

The Russian nuclear energy industry boasts what is probably the most bloated NPP construction budgets, with capital costs reaching between $4,500 and $7,200 per kilowatt of installed capacity while construction time frames range between six and ten years. Still, Russia is planning to build, according to varying reports, twenty to forty new nuclear reactors within the next 20 years.

Furthermore, the price of electricity generated at nuclear power plants does not include accident response and cleanup measures, nor future decommissioning costs, nor the expenses associated with the storage, transportation, and reprocessing of spent nuclear fuel and radioactive waste. It is only by covering these costs with funds received through various subsidies from the state budget that the nuclear industry is able to charge an acceptable power tariff. That doesn’t mean, however, that the taxpayers are relieved of the additional burden that the cleanup, waste management, and other costs place on their shoulders.

No calculations based on a fair and balanced approach could give nuclear energy even an appreciable competitive edge over other energy sources – not to mention the serious risks. But nuclear subsidies are what the Russian government is somehow always finding money for while its support for clean renewable energy or energy efficiency initiatives is certainly far less generous.

Equally important is that there exists serious doubt with regard to nuclear energy as an emissions-free alternative to other traditional power production industries. In 1997 estimates by Germany’s Institute for Applied Ecology, or Oeko-Institut, greenhouse gas emissions produced by the nuclear fuel cycle in its entirety – from uranium ore exploration and extraction to decommissioning nuclear power plants and handling the resulting waste – were demonstrated to approach the levels of those generated by modern gas-fired plants.

The excess of today’s global carbon dioxide concentrations in the atmosphere over what we need to cut them down to by 2050 to avert the worst consequences of climate change is assessed at 25 to 40 gigatons. In order to reduce this gap by as little as five gigatons using nuclear energy as a way to offset emissions, the world would at the very least have to triple the existing number of its nuclear power plants. Essentially, implied here are such vigorous rates of industry development that cannot be backed by either technological or financial resources available at this time. Still, the nuclear industry keeps trying to pass itself off as a climate cure that it is not.

Old mistakes must be corrected and new ones prevented, the Japanese activists said in their address to Durban’s climate negotiators. Fukushima has forced thousands out of their lands, leaving homes they will never be able to return to, and turned a prosperous region into a radioactive no-go zone. If its somber lessons are not be lost on a reckless humankind, the technology that has brought the world this and other nuclear tragedies must have no place in the future climate regime.

This English translation and the accompanying image were originally published on Below 2C, a newsletter maintained by Russian NGO observers at UN climate talks, and were reprinted here with their permission.