DURBAN, South Africa – Russia’s refusal to sign up for the second commitment period of the Kyoto Protocol nearly disrupted the negotiations process in Durban and most certainly cost the country billions in environmental modernization funding. Still, the protocol stood, and new agreements were reached – but just how strong and timely are they to cut global emissions to the needed level and prevent millions worldwide from falling victim to an advancing catastrophe?

Published on December 14, 2011 by Vladimir Slivyak, translated by Maria Kaminskaya 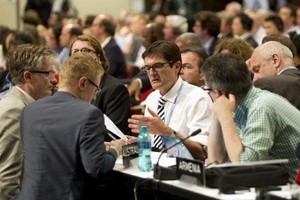 The COP17 climate talks that started in South Africa’s Durban last November 28 to develop a new global treaty to replace the outgoing Kyoto Protocol, slated to expire in 2012, finally wrapped up this past Sunday morning. Official delegates from 194 countries had failed to reach an agreement by the close of last Friday, the planned departure date, and spent another day and two nights desperately hammering out a consensus. Several key political documents were adopted as a result. Unfortunately, these decisions fall short of what is needed to ensure a robust cut in global greenhouse gas emissions and avert the worst of global warming. Meanwhile, the Russian delegation has managed to lose its country the opportunity to obtain climate funding that it could avail itself of via Kyoto’s mechanisms to modernize Russia’s industry and develop green energy technologies.

So what exactly has this most recent climate summit achieved?

The most important decision was to extend the Kyoto Protocol, giving it a second commitment period that will start in 2013 and end in either 2017 or 2020. Japan, Canada, and Russia backed out of any further commitments under the Protocol, but thanks to the European Union, island states, and a group of least developed countries, the sole legally binding document with international force that had any authority to compel world countries to cut dangerous emissions was saved. In effect, the delegates have long had a mutual understanding that the old Kyoto Protocol, which is not without its faults, must at some point be replaced by a new, more ambitious comprehensive climate deal that would be more suited to reflect the realities of today’s world and thus deal with the threat of global warming more efficiently. A decision has thus been made to work out such an agreement by 2015 and have it come into legal force after 2020.

The problem with the old treaty is not a complicated one: It does not cover all of the world’s leading polluters since at the time it was developed – the Kyoto Protocol was adopted in 1997 – China, India, and other major developing economies had not yet become the largest sources of global greenhouse gas emissions they are now. Thus, they are not bound by any obligations to cut emissions. Commitments under the new deal, when it is finally developed, are expected to extend to these countries too.

There is just one hitch – and it’s not one to trifle with. Right now, when climate change is progressing at an alarming speed, wasting another decade on talks is tantamount to a crime. As the world procrastinates, new and frightening statistics emerge – such as that, according to the latest UN figures, over 700,000 victims have in the past years been claimed by 14,000 extreme weather events directly attributed to climate change. This dreadful toll is only bound to rise in the future. A lack of immediate and drastic response will result in growing shortages of food and water resources worldwide, an unchecked march of dangerous infectious diseases across the planet, and millions of new climate refugees. Faced with this scenario, Russia’s remains perhaps the only world government that still chalks up the numerous natural disasters it has been grappling with in the recent years – from unprecedented heat waves in the summer to unmanageable precipitation in the winter periods – to freak, and thus dismissible, happenstance.

It is now common knowledge that Russia’s vast permafrost zone is thawing while the fertile southern areas that have for centuries been Russia’s breadbasket have been gradually shifting northwards. Climate skeptics like to shrug these facts off, saying all the more lands will now become available for agriculture. In reality, the opposite is true: Climate in the south is becoming hotter, putting harvests in increasing danger, while Russia’s northern territories, which were earlier unsuitable for farming, lack the necessary infrastructure and cannot be used to cultivate soil or produce crops anyway.

But back to the UN talks in Durban. Unfortunately, the negotiations did direct damage to Russia – or rather, the damage was done not by the negotiations per se but by the poorly conceived position the Russian delegation had brought to the table and maintained throughout the summit. Joining the second commitment period of the Kyoto Protocol would not have carried any foreseeable risk of strain on Russia’s economy whatsoever: As a result of the economic and industrial collapse of the 1990s, Russia’s greenhouse gas emissions are far below the permitted level – at around 35 percent compared to that of 1990, which is considered the baseline reference value. Within the next decade, Russia will unlikely raise its emissions closer to the allowed level by more than ten percent, if even that. On the other hand, the Kyoto Protocol has useful cooperation mechanisms that would have allowed Russia to earn development funding necessary to revamp its industry and employ more climate-friendly energy technologies.

What could be simpler? All opportunities were there to participate and effect a profit – just be there to use them. But the Russian delegation chose to team up with those countries that spoke against the extension of the Kyoto Protocol – namely, Canada and Japan. Those countries, as it turns out, don’t really feel like spending on emissions cuts. Apparently, they believe climate change will pass them by. But for Russia, quitting the Kyoto Protocol in its second commitment period has a number of serious implications. In all likelihood, Moscow’s decision has cost Russian businesses the opportunity offered by participation in climate agreements to attract resources required for the modernization of Russian industry. That task, however, will still have to be addressed – it’s just that the money will have to come from the Russian budget. Or Moscow will have to reconcile itself with the prospect of seeing Russia’s large energy-generating and industrial production sites become even more technologically outdated and dilapidated than they are, creating a more than tangible risk of new large-scale technological catastrophes, of which Russia has had no lack in recent years.

During the negotiations, unofficial observers sent to Durban by Russian non-governmental organizations – I was among them – spoke with the Russian delegation repeatedly, pointing out that their position was counterproductive for the country. Alas, we never heard any clear explanations as to the reason this political game was being pursued – a game that would deny Russia access to the resources available in the climate agreements Russia was so quick to turn its back on. Russia’s former sister USSR republics of Ukraine, Kazakhstan, and even Belarus all retained that access. It is quite possible that Russia will lose its right to trade carbon credits, too. How will our diplomats explain that “achievement”?

All in all, the negotiations in Durban have proven more disappointing than encouraging. Many of the key decisions were postponed until next year. The agreement reached on the Green Climate Fund concerned the technical aspects of its operation – but it still remains uncertain how exactly countries are supposed to raise the $100 billion promised to be disbursed annually via this fund starting from 2020 to help poor nations with climate change mitigation measures.

An analysis of the current climate situation based on emissions levels stated by individual countries at this point tells us that the planet is charging fast ahead along a path that ends with global temperature rising by 4 degrees Celsius. Scientists believe in order to prevent the most catastrophic – and irreversible – effects of climate change, the world needs to keep the global temperature rise within 2 degrees. To achieve that, says the IPCC, or the UN’s Intergovernmental Panel on Climate Change – a group of international experts whose assessments serve as basis for UN’s climate policies – global emissions must be reduced by 25 to 40 percent by 2020, and further by 50 to 80 percent by 2050.

Alas, a sad conclusion must be made that once again, a climate summit has failed to push the world community toward uniting in an ambitious cooperative effort to reduce emissions to the needed level. We had better now prepare for a very hot decade – one that the accelerating climate change may ensure several hundred thousand, if not millions, may not live to survive.

Vladimir Slivyak, co-chair of Russia’s Ecodefence, is a frequent contributor to Bellona. He recently returned from the UN climate talks in Durban, South Africa.