After its surprise signal that it would soften its stance toward a legally binding climate agreement, China laid out conditions under which Beijing would accept such a deal, which would go into effect after 2020, when current voluntary emissions cut pledges run out.

Published on December 5, 2011 by Charles Digges 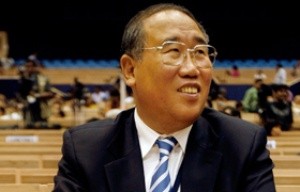 The Chinese delegation has yet, however, to propose how deeply it would cut its emissions should its conditions be met.

The conditions, laid out by China’s top climate negotiatior Xie Zhenhua include a renewal of carbon-cutting pledges by rich nations under the Kyoto Protocol, along with hundreds of billions of dollars in short- and long-term climate financing for poorer countries.

“I think after 2020 we should also negotiate a legally-binding document,” Xie told a group of NGOs at talks in Durban under the UN Framework Convention on Climate Change (UNFCCC), according to Agency France Presse.

“The problem now is that we have to see whether we have conscientiously implemented the legal documents we already have agreement on. This is a very important issue for us,” he said through an official Chinese translator.

Xie’s remarks came as the first of some 130 ministers expected for a high-level session beginning Tuesday arrived over the weekend.

The 194-nation talks, which wrap up Friday, are now abuzz with speculation on the prospect of a “Durban accord.”

Such a deal could set a pathway for a binding climate pact that would include not just rich countries, as does the Kyoto Protocol, but all major greenhouse emitters, including China, India and Brazil.

Major emerging economies and other developing nations already emit more than half of current carbon emissions, and within 20 years are projected to account for two-thirds, said AFP

The European Union launched the idea, tying its support of the Protocol – which risks becoming irrelevant in 2012 without new carbon cutting pledges from industrialized nations – to a “mandate” for a broader 2015 climate pact.

The United States has reacted coolly to the proposal, as has India while host country South Africa, and perhaps Brazil, have expressed a greater openness, Reuters reported.

China first came forth with a statement that it would soften its stance toward obligatory and legally binding cuts late last week when negotiator Su Sei said his country did not “rule out” a legally binding treaty to begin after 2020.

The news was greeting by Bellona President Frederic Hauge as “adding great momentum “to the climate summit and were “a wake up call to those observers who were not expecting much to come from these negotiations.”

Indeed, the announcement from China, which has been holding out on concrete emissions cuts – focusing instead on carbon intensity levels and non-binding self regulated cuts – has been credited with having the power to rescue the Kyoto Protocol, which many nations, gathered in Durban would like to see happen before it expires next year.

Hauge was careful to temper his enthusiasm about the initial comments from the Chinese delegation, which could break a four-year long deadlock with the United States and India by upping the ante and pressuring them, too, to sign on to binding targets.

But Hauge also pointed out that China’s words in and of themselves do not solve anything, and he underscored that the Chinese have yet speak about what kind of emissions cuts they are willing to pursue.

EU Commissioner Connie Hedegaard was also guarded in greeting the Chinese proposals with too much enthusiasm.

“China has always been in favour of a legally binding deal,” she told reporters at a press conference this morning in Durban. Indeed the Chinese at Copenhagen’s COP15 and at Cancun’s COP16 has said it would take on unilateral carbon intensity cuts – which are less stringent that actual emissions cuts.

“The important question to ask the Chinese will be: Will a legally binding deal mean that China will be as equally legally bound as other parties,” said Hedegaard.

She said it is still unclear how far China will commit to an international emissions accord, and said she will ask China about its signals in the last week that it is willing to begin negotiating on bringing major developing countries into a legally binding deal on their emissions controls

Among the world’s three biggest polluters, China is first, followed by India and the United States. None of the nations are signatories of the Kyoto Protocol. China and India managed to skirt signing the 1997 treaty as they fell under the protocols “developing nation” status, which exempted them from making cuts.

The United States, under the Administration of Bill Clinton and his environmentally active Vice President Al Gore was blocked from ratifying the protocol by a unanimous vote of the Republican controlled Senate.

During his meeting with NGOs, Xie enumerated five conditions for China taking on pledges under a new accord that would go into effect after 2020, in response to a question from Alden Meyer, a policy analyst from the Washington-based Union of Concerned Scientists, AFP reported.

One is that the European Union and “other countries” sign on to a new round of enforceable pledges under Kyoto.

Europe has signaled its willingness to extend its commitments by five, perhaps eight years, but the chances that it would do so under the treaty’s laborious ratification process seem remote, said AFP.

So-called “fast start” climate financing for poorer countries of $30 billion for the period of 2010 to 2012 must also be delivered, Xie said. Likewise a Green Climate Fund that would ramp up to $100 billion per year by 2020, the agency reported.

A host of fundamental agreements outlined at the 2009 COP15 summit and conjoined to the UN process at last year’s COP16 in Cancun, Mexico must also move forward.

These include initiatives for technology transfer, adaptation – helping vulnerable nations cope with impacts – and new rules for verifying that carbon-cutting promises are kept.

Finally, China insists that a review of climate science begin as planned in 2013, and that established principles in which historical responsibility for creating the problem of climate change, and the respective capacity of countries to fight it, are respected, said AFP.