DURBAN, South Africa – On Thursday evening, Bellona’s President Frederic Hauge spoke on carbon capture and storage (CCS) – a technology that allows for safe isolation of carbon dioxide emissions – at an event organized by the European Commission’s Directorate-General. While delegates are engaged in intense closed-door discussions in negotiations room in Durban on whether or not CCS should be a part of the Clean Development Mechanism (CDM), CCS has taken centre stage in the climate summit’s corridors and conference rooms.

Published on December 2, 2011 by Magnus Borgen, translated by Maria Kaminskaya 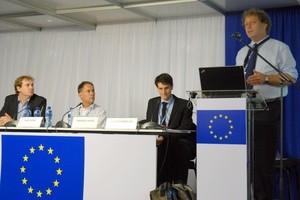 “If we do not agree that CCS is a key solution to combating climate change, then it’s the same as not taking global warming seriously,” Hauge said in a somewhat heated debate that gathered both CCS supporters and sceptics at the European Commission’s event.

CCS as a path to a carbon-negative economy

“I have participated in international climate negotiations for nearly 20 years, and have worked actively for renewable energy, biomass, CCS, and energy efficiency,” Hauge said. “I want to have as much renewable energy as possible in the future energy mix, but if we are realistic, we really need to concentrate on CCS. Bellona has as its goal the promotion of technological solutions that can make the fight against climate change profitable. Profitable technologies have the capacity to change the politics.”

Hauge then explained why it was critical to boost investments and put in place the infrastructure needed for future CCS plants:

“Climate research shows that we do not have time to wait, we will soon be just one investment cycle away from 2050,” said Hauge.

He went on to say: “It is important that we not only get popular approval, but also public support, to ensure that CCS technologies play an important role in the next 50 to 60 years. We expect that the next report from the [Intergovernmental Panel on Climate Change, IPCC] will put a strong focus on the need for technologies like Bio-CCS, which can remove CO2 from the atmosphere, in the future.”

Hauge deplored the situation where today’s biggest polluters aren’t availing themselves of tomorrow’s solutions – at a time when “not only CO2 must be captured and stored, but also sucked out of the atmosphere so that the world becomes carbon negative.” 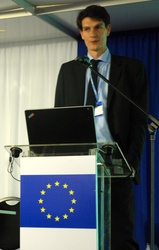 The European Commission’s Directorate-General for Climate Action’s Karsten Krause pointed out in his speech that CCS is a must-have technology for the EU countries, where the future climate regime prescribes an 80-percent reduction of all greenhouse gas emissions by 2050. The EU representative mentioned thirteen projects that are planned for implementation with funds from the EU’s NER 300 Programme, where 300 million’s worth of emission quota are set aside to partially finance the development of innovative climate technologies such as CCS.

In order to apply for funds from NER 300, a participant must join the so-called “knowledge sharing programme,” which implies that all knowledge about climate technologies is shared and acquired together, in order to reduce the costs of research and development.

“The goal, after 2030, is to make sure that fossil energy is used very little in Europe where CO2 emissions are not captured and stored. CCS is an important tool for realizing the objective of establishing a low-carbon economy in the EU by 2050, and the possibilities for combining CCS with biomass will be central to the EU’s future work,” Hauge said.

Brendan Beck, of South African CCS Centre (Saneri), offered the event’s participants an interesting insight into the realities of South Africa’s energy situation. His argument for the need for CCS came through all the stronger because it was based on the unique African perspective.

“Of all the electricity in this country, 92 percent comes from coal. If we had gone over to renewable energy now in the short term, the South Africans would have had to install an equivalent of 50 percent of current global wind power capacities just to replace the two largest coal plants we have here in South Africa!” Beck said. “Besides, we also have here, in this country, the biggest global single emission source in this country, Sasol’s oil production from coal, where it is very important to start an efficient CCS plant.”

Beck then warned that South Africa’s economic goals could raise that country’s emissions unless CCS technology was employed:

“If we do not get support for CCS, [our] desired economic growth will quadruple South Africa’s CO2 emissions, if the growth is based on the status quo in our energy policy,” Beck said.

During the debate that followed Hauge’s speech, some in the audience – participants from the German delegation – expressed certain criticism of the technology, claiming developing CCS stood at odds with the goal of investing into renewable energy.

But a delegate from Ghana challenged that view:

“Not all countries have the same opportunity as Germany to be able to make a political choice in their energy mix. In Ghana, we will have to depend on coal to ensure economic prosperity for our people,” the participant from Ghana said. “It is completely unrealistic to believe that economic growth in my country could happen only with renewable energy. So, being against CCS as a solution to combat global warming is not a solution at all.”

Frederic Hauge concluded by adding some input for the negotiators.

“Rich countries must look at their historic CO2 emissions as a bank loan, which now must be paid back to the developing countries, with interest,” Hauge said.

“If we are to combat global warming and poverty, the focus on bio-CCS will give poor countries an economic incentive to find sustainable ways of growing biomass. That way, a value chain and economic incentives will be created that are extremely interesting to explore further, as the new climate deal creates demand for biomass from rich countries. After all, what do we want tomorrow’s workers in poor countries to do – do we want them to continue to dig for coal, or grow sustainable biomass?” Hauge asked rhetorically.