Deep into an overtime day at the Durban Climate Summit, Maite Nkoana-Mashabane, chairwoman of UN climate talks urged delegates to approve a compromise package of accords on fighting global warming, telling delegates they should set aside national interests in order to save the planet.

Published on December 10, 2011 by Charles Digges 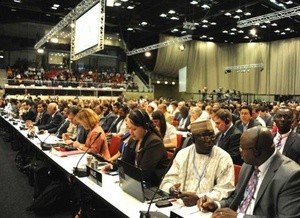 “Let us agree to accept the Durban outcome package. I feel the four pieces of the package before us [….] represent a comprehensive, balanced and credible set of outcomes for this conference,” she said according to various news agencies.

“I think we all realize they are not perfect. But we should not let the perfect become the enemy of the good and the possible,” she added.

The texts being negotiated on would see a process leading to a new global emission-cutting deal covering all countries begin next year, finishing by 2015, reported the BBC.

They would see EU countries and perhaps other developed nations putting their current emission-cutting pledges under the legally-binding Kyoto Protocol.

The package is backed by the EU, and by the Alliance of Small Island States (Aosis) and the Least Developed Countries (LDCs) bloc, which together represent more than 70 of the world’s poorest and most climate-vulnerable nations.

But it is unclear whether the BASIC group of Brazil, South Africa, India and China, or the US, can live with the ambition they contain for curbing emissions.

Some 24 hours after a day’s extension in the negotiations, some media said negotiations looked set to continue into a second extra day as visibly exhausted delegates tried to hammer out a deal, some media have reported.

Jonas Helseth, Bellona’s remaining observer in Durban has commented that the process is hardly proceeding in an organized fashion.

“It’s chaotic down here,” he said.

Earlier in the day, delays were caused by the distribution of a fake document purporting to be an official text. It remained unclear how or why a false text had been introduced into negotiating procedures.

And many delegates from poorer developing countries have had to throw in the towel as the day wore on, as their economy class airline tickets did not allow for extensions.

After speaking with members of Polish EU presidency, Heltseth reported that they still hope that the texts will go through the plenary. They have changed their flights for tomorrow and seem intent on making this another all-nighter, which might be a sign that there is will to get some result.

After several pauses and breaks throughout the day, nations are still clashing over a possible extension of the Kyoto Protocol, the world’s only legally binding climate agreement, which expires next year.

Envoys in Durban are also considering a governing instrument for the Green Climate Fund, which would help channel part of the $100 billion a year in aid rich nations have promised by 2020 to help developing countries fight climate change.

European Union Environmental Commissioner Connie Hedegaard noted that any plans for extending Kyoto clash with the EU’s own binding goal to cut emissions by 30 percent by 2020 if other counrties agree to cuts themselves. The EU has said, according to various reports, that it wouldn’t extend Kyoto’s emissions limits beyond next year unless all countries agree to start talks for a new accord that’s “legally binding,” a phrase rejected by the U.S. on the grounds that China, the world’s biggest greenhouse gas emitter, isn’t willing to fully participate in such a treaty.

And countries are still bridling over a proposal that calls on them to craft a “protocol or another legal instrument” to lower fossil fuel emissions and reduce the threat of global warming,” Bloomberg reported. The U.S. accepted the plan being pushed by the European Union. Other countries remain opposed, according to EU delegates.

“One of the biggest concessions of the last 24 hours was the fact that the Americans said they are prepared to live with the language,” U.K. Energy Secretary Chris Huhne told Bloomberg. He declined to say who opposes the plan.

Now that the EU, the U.S. and Brazil have reached agreement on language calling for a “legal instrument,” the “big unknown” is where China and India stand, Norway’s climate change envoy, Henrik Harboe, told Bloomberg.

“They are very unclear,” he said. “I think both of them are very afraid of ending up with the blame.”

The future of the UN climate process

Indeed, much of the impasse of the past two days seems to boil down to a tussle between the U.S., which wants all polluters to be held to the same legal standard on emissions cuts, and China and India which want to ensure their fast growing economies are not shackled.

Earlier in the day, Brazil’s climate envoy Luiz Alberto Figueiredo Machado had said he believed a deal would still get done in Durban, avoiding the postponement of decisions until next year.

“We are agreeing a protocol or another legal instrument. Everything is there,” he said.

But if Durban fails to produce an accord, a number of measures tentatively agreed could fall by the wayside, calling into question the effectiveness of the such large-scale negotiations.