DURBAN, South Africa – The United Nations Framework Convention on Climate Change announced in a release here at Durban’s climate negotiations that next year’s climate summit will take place in the Arabian Peninsula nation of Qatar, the UN has said in a release.

Published on November 30, 2011 by Magnus Borgen, translated by Charles Digges 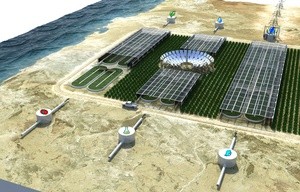 The release is one of the first formal orders of business that had to be dealt with by the Conference of Parties 17, or COP17, which began here in South Africa on Monday

Bellona President Frederic Hauge has experience of working in Qatar, and is pleased with the news.

“It’s very funny that COP18 [next years climate summit] has been given to Qatar,” said Hauge. “The country is one of the foremost examples of an oil-producing country that has visionary ideas about renewable energy, not to mention a country that dares to invest large sums in innovative technologies.”

Qatar and South Korea were both vying to host COP18, which will run from November 26, 2012 to December 9 2012. Yesterday, the UN Climate Secretariat reported in a statement released here at the Durban negotiations that the two counties had reached an agreement during a meeting with all Asia block nations that Qatar would host the next UN climate summit.

In return, South Korean will hold ministerial meetings to prepare for COP18 in the weeks prior to its launch. Such ministerial meetings are critical to high-level clarification of the central issues that will be discussed at the Conference of Parties meetings, said the UN statement.

The South Korea meetings will follow the Rio + 20 summit in Rio de Janeiro next June.

UNFCC Executive Secretary Cristiana said in the release that: “I congratulate these two countries on their commitment to work together in the lead up to and during the COP. Both countries are leaders in their own ways, and can generate strong synergies to put the world on a more climate-safe path,” adding, “All governments working together on the essential climate steps can be inspired by this collaborative spirit.

Bellona announced the establishment of the Sahara Forest Project in cooperation with Yara, the worlds largest fertilizer company, and Qatar’s Qafco, the world’s largest producer of ammonia and urea, during its “The Future is Carbon Negative” 25th anniversary conference on June 16th.

The agreement on Qatar is a major step toward the realization of the Sahara Forest Project, and the pioneering project reflects the kind of holistic vision and solution that the world needs to explore and address the complex challenges related to food, water and energy security.

Andris Piebalgs, EU Commissioner for Development, has said that, “the Sahara Forest Project appears to be a very interesting example of a more integrated and holistic approach that we need much more of in the future to make our energy, water and industrial systems more sustainable.”

The Sahara Forest Project has been presented in a number of leading publications as Science, National Geographic, TIME Magazine, The Telegraph and The Guardian.

“The Sahara Forest Project could be of great importance in a new international climate regime, and therefore it is very inspiring that the UN has given COP 18 to a country Bellona is already deeply involved in,” said Bellona’s Hauge who arrived here in Durban today where he will, among other things, discuss the Sahara Forest Project at a Bellona event scheduled for December 8th.