Prime Minister Vladimir Putin, in an unlikely turn of events, has bestowed an annual journalism prize on investigative reporter and editor Mikhail Beketov, who was threatened, beaten and crippled for his reports in opposition to a state-backed toll highway between Moscow and St. Petersburg.

Published on November 3, 2011 by Charles Digges 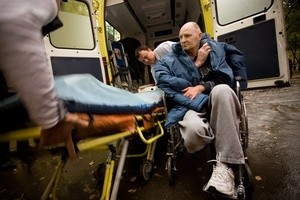 Activist who are a calling for an end to the highway project as well as other journalists – some of whom are sharing in the prize – have condemned the award as a cynical and insincere gesture from the Kremlin to attempt to right a long history of violent stifling reporters.

The 2008 attack on Beketov and the lack of action in the case by Russian state investigators have been widely reported in the Russian and Western news media and have been seen as a gauge of threats to press freedom in Russia.

Beketov, as editor of Khiminskaya Pravda, has become a bellwether of the movement to save Khimki Forest, an ancient oak wood north of Moscow through which the state and heavily government-backed contractors are building the $8 billion road.

Beketov received threats and harassment beginning in 2007 for his newspaper’s publications, and unknown marauders set his car ablaze and killed his dog in May of that year. Suspicion for that incident fell on Khimki Mayor Vladimir Strelchnko, who sued Beketov for accusing him on television of “political terror.”

He is now one of 10 recipients of the yearly Kremlin award for excellence in print journalism that carries with it a $32,000 prize.

No suspects in Beketov investigation

The case to find Beketov’s assailants has yielded no suspects. Once a cause celebre, his case was closed for lack of evidence, only to be reopened again in the summer of 2010 when a groundswell of public protest against clear cutting Khimki Forest reached a fever pitch. The cause was joined by Russian and international rock stars, most notably Yury Shevchuk of DDT and Bono of U2.

Because of mass public opposition, President Dmitry Medvedev ordered a halt to the road construction project in the summer of 2010 “for further consideration” of alternative routes. But the project was again taken up when the Kremlin claimed no alternatives could be found.

Meanwhile, other activists and journalists taking a pro-Khimki stance continued to receive savage beatings that bore the earmarkings of an organized and possibly state sponsored intimidation campaign. So similar were they to the attack on Beketov that Khimki’s Strelchenko was forced to issue a statement saying he had nothing to do with the attacks.

Break from tradition or cynical ploy?

Traditionally, the prize Beketov won has gone to journalists who toe the Kremlin line – and the Kremlin and the Khimki regional government have much at stake in the building of the toll road to St. Petersburg.

Some have speculated that the award to Beketov is an effort by the government of Putin to soften his image. During his tenure as president and then prime minister, press freedoms have suffered immeasurable blows, and beatings, in some cases murders, of journalists have gone unpunished.

The most egregious of these cases was the murder of Anna Politkovskaya, an ardent critic of Putin’s policies in Chechnya, whose withering reports showed up Putin’s campaign of atrocious abuses in the breakaway republic.

She was shot in a contract style killing in 2006. Despite attempts to bring her killers to justice, court cases have failed to do so.

Putin is again poised to become president in 2012 – possibly for two terms that would end in 2024 under Russia’s new 6-year term limit.

Neither Putin nor any other government official commented on the prize announcement, which was quietly posted on a government web site Monday night.

Yevgenia Chirikova, an activist who has led the campaign to defend Khimki  Forest and worked closely with Beketov said the award was “just cynicism.”

“If the cash prize would cover all of [Beketov’s] treatment, if it would give him back his leg and the third of his brain that has been taken from him, I would vote for it with both hands,” she told the New York Times.

“If this has been done to say once again, ‘[Beketov] is great,’ to the people who built the system that crippled [him], it’s just cynicism.”

Chirikova herself has been threatened by state child care authorities who have told her they will take her children away over he involvment in the Khimki campaign.

Sergei Parkhomenko, who is also one of this year’s 10 Kremlin journalism  honorees, agreed, telling the radio station Business FM that the award to Beketov was “absolutely cynical.”

Parkhomenko, who edits the magazine Around the World, told the radio station: “The people who crippled [Beketov] are still free, and some of them occupy important political positions.”

He said he would not attend the Kremlin ceremony to accept the prize.

Other journalists in some of Russia’s most liberal quarters, however, said that the award was not necessarily Putin’s doing.

Prize winners are nominated by editorial offices and selected by a panel of journalists. Dmitri Muratov, editor of the weekly newspaper Novaya Gazeta – where Politkovskaya worked when she was murdered, and maintains its voice as Russia’s strongest opposition papers – told the New York Times that he had nominated Beketov for being the first to focus national attention on the Khimki forest.

“It’s necessary to realize this prize money is not coming from Putin’s hand or from his pocket,” Muratov said. “This is a state prize for those members of society without whom we cannot function in this country.”

The head of Russia’s Union of Journalists, Vsevolod Bogdanov, told the newspaper Kommersant that 90 percent of the prize jury had voted in Beketov’s favour.

Kommersant reporters have also had their scrapes running afoul of the government line on Khimki: Oleg Kashin, a Kommersant reporter and blogger covering the Khimki story was brutally beaten in a November 2010 attack that was caught on a security camera.

The horrific footage of appeared on state television and drew an outraged reaction from the Russian media, the public and Western governments.

The video footage of the attack shows one assailant pummeling Kashin with a metal bar while the other holds him down.

US promises pressure on Kremlin over Khimki

The awarding of the prize to Beketov comes two weeks after a visit by US Assistant Secretary of State Michael Posner, the top human rights specialist in the American government, to Chirikova and other of Beketov’s colleagues near Khimki. Posner promised to press the Kremlin harder on human rights.

“When somebody organizes a protest, they shouldn’t be beaten over the head with a baseball bat,” Posner said at the meeting at the summer house of Konstantin Fetisov, a Khimki forest defender who was severely beaten by unidentified thugs last November, The Moscow Times reported.

Fetisov was left with impaired speech and memory after being beaten over the head with a baseball bat outside his apartment in Khimki on November 4 last year. He spent 40 days in a coma after the assault.

Though Posner’s visit did not culminate in any concrete promised to intercede with the highway project, Chirikova nonetheless told the The Moscow Times she was satisfied.

“I didn’t expect [Posner] to say, ‘I’ll save you!’ … For us, the most important thing is that they’re paying attention,” she told the paper.