Russian environmental activists said Friday they had been repeatedly attacked by security guards and unknown “goons” while trying to prevent logging in a Moscow region’s Khimki forest for a disputed highway. 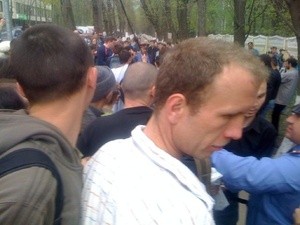 The accusations follow on another incident on May 4 when activists were beaten and an expensive forest harvester torched Wednesday — all with little apparent reaction from police.

The movement to defend the Khimki forest has established a camp near the logging along the Klyazma river north of Moscow and tried to prevent workers from operating machinery, arguing that the clear cutting in the ancient oak wood to make way for an $8 billion toll highway between Moscow and St. Petersburg is illegal.

Environmentalists say the highway can be built to bypass the old forest.

“We have been attacked by both security guards and goons dressed in civilian clothing,” Yevgenia Chirikova, leader of the movement to defence Khimki forest told Bellona Web of Friday’s incident, adding that several activists have been taken to hospital.

“I was hit on the head from behind with something solid and lost consciousness,” said another activist, Sergei Ageyev.

Another member of the group, Oleg Menshikov ended up with a broken jaw in the nighttime attack.

Chrikova said six people from the camp had been hospitalized as a result of attack.

Chirikova estimated the number of attackers who descended on the camp in the wee hours of Friday moring at 20. When they arrived, Chirikova said “they began to savagely beat everyone who was located at the camp, including women. They knocked them to the ground and beat them.”

“The attack, in essence, came in two waves. The first time, the bandits came to use and beat activists, and then returned and beat them again,” said Chirikova, adding that it took police 40 minutes to respond.

A number of the attackers, according to Chirikova, were dressed in uniforms of the Vityaz security firm, which has been hired by Teplotekhink.

Activists told Agency France Presse that two of the unidentified assailants had been taken to a police station but their identities are still not known, they said, fearing that the police will eventually let the men go.

Khimki activists and journalists have been attacked in the past, including local newspaper editor Mikhail Beketov who was left with brain damage after a brutal attack two years ago.

Chirikova herself and Alla Chernyshova, who edits the leaflet Khimkinskaya Pravda Live, have also been threatened by Russia’s child protective services who say they will take the women’s children away.

But the Russian government decided late last year that the first modern highway between Moscow and Saint Petersburg should go ahead, despite destroying around 100 hectares of trees. In all, about 175 of the 1,000 hectares of the centuries-old Khimki forest are scheduled for deforestation to make way for the highway.

Vedomosti newspaper reported on Friday that the company financing the planned highway told Russia’s state road company Avtodor in a letter that losses from delays in construction amounted to four billion roubles ($144 million).

Avtodor said in a statement issued Thursday that activists were lying about attacks by security guards and that all work was legal.

The late night attack against Khimki activists was not the first of its kind. Last July, a group of about 50 masked youths descended on another camp pitched by the forest defence group and injured several of the activists.

Boris Vishnevsky contributed to this report.