During Russian Prime Minister Vladimir Putin’s visit to Brussels last week, European Commission President José Manuel Barroso did little else than whisper a shy question about human rights before a press conference. The EU certainly can and should do more, especially where the activists who oppose an $8 billion highway project through the ancient Khimki Forest north of Moscow is concerned.

Published on March 4, 2011 by Mikhail Matveev 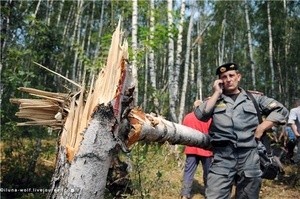 Just two days before Vladimir Putin met Barroso in Brussels last week, back in Russia, Russian authorities were busy threatening Khimki activist Yevgenia Chirikova that her children would be taken away from her. A week before, Russian police had arrested her colleague, Alla Chernyshova, together with her daughters of 4 and 6, detaining them for several hours on bogus claims that Chernyshova had been responsible for a false bomb threat.

The authoritaian sabre rattlig agaisnt Chirikova and Chernyshova was but the latest in a string of harassment and threats – some nearly lethal – unleashed against those who would save the ancient oak wood from evisceration.

Chirikova and Chernyshyova are members of the Movement for the Defence of Khimki Forest, a group trying to prevent the construction of a section of the St. Petersburg-Moscow motorway (15-58 km) through the Khimki forest, one of the few natural areas left for inhabitants of the wider Moscow area. In November 2009, Prime Minister Putin ruled the change of status of the Khimki forest, from protected area to lands zoned “for transport and infrastructure,” a move critics say was illegal.

French construction giant Vinci is now in charge of constructing the motorway.

Although there are several possible routes for the Moscow-Saint Petersburg toll road, planners have chosen the route that will destroy the forest by splitting it into at least four isolated segments.

The felling of the trees started last summer, but it was halted after a few weeks by President Dmitry Medvedev in reponse to protests from Russian and international environmentalists.

Yet the construction gained a new lease of life at the end of last year, after a government review unsurprisingly concluded in December that the route through the forest was the best alternative. The government’s conclusions are squarely opposed by an independent study initiated by environmental groups and authored by 18 experts in the field of environmental protection, environmental law, forestry, urban planning and transport development: handed to Medvedev in early February, this analysis concludes that widening an existing road, together with developing electric public transport, would be optimal.

For over a year now, activists attending actions to defend the Khimki forest have been arrested, intimidated, and physically assaulted by security guards and unidentified individuals. Using the threat of taking away children is just one of the tools employed by Russian authorities in their aggressive plan to stifle opposition to the road through Khimki. Activists’ houses are monitored by ununiformed men and their family members are also under close scrutiny. Fake criminal cases are built against them. Police routinely arrests activists even during rallies that have official permits: on January 15, during an action in which activists symbolically adopted trees from the Khimki forest, four of them were arrested at gunpoint. Notoriously, local journalist Mikhail Beketov and activist Konstantin Fetisov were brutally beaten by unidentified assailants and are now left heavily disabled.

Such practices by the Russian authorities have plagued the project ever since the beginning. Nevertheless, until last year, both the European Investment Bank (the EU’s in-house bank) and the European Bank for Reconstruction and Development were interested in financially supporting the disputed motorway section. The two banks were expected to commit more than 200 million euros to the project. Only at the end of 2010 did the European Commission announce that the two structures would not finance a toll road passing through the Khimki forest.

Even so, at the moment, Russian state corporation Avtodor is reportedly negotiating with the EBRD in view of the latter’s participation in further sections of the St. Petersburg –Moscow motorway (to be built once the section through Khimki forest is completed) as well as in other road projects in Russia.

In addition to the Khimki section, several environmentally destructive motorway projects are being planned or implemented at the moment in Russia, some of them with potential support from the European public banks. For example, the St. Petersburg Western Speed Diameter – likely to involve at least the EBRD – is planned to pass through the Yuntolovo wildlife reserve, and has already caused significant public protests. The Odintsovo bypass, also in the Moscow region, for which the EBRD expressed its interest in financing in 2008, will be routed through the centre of the Podushkinsky forest park.

The EIB and the EBRD explain their involvement in controversial projects such as these Russian roads by arguing that their contribution helps increase transparency, public participation and the enforcement of environmental standards. Nevertheless, the two banks have been forced to distance themselves from the Khimki project precisely because of grave violations of these principles. Clearly, European financing has had no positive impact on the human rights situation in Russia. On the contrary, it has allowed Russian authorities to continue with their abusive practices while claiming there is European support for the motorways.

Surely then, if Europe claims to be concerned about the human rights situation in Russia, the only way forward is to keep European money out of Russian projects that are implemented with the help of repression — until significant improvements are forthcoming. Withdrawing all European support from Russian motorways would put pressure on Russian authorities and certainly speak louder than Barroso’s whispered questioning in Brussels. If it doesn’t help improve the human rights situation in Russia, such an act would at least help clean up the EU’s image, at a time when many of its silent economic pacts with authoritarian leaders are being scrutinized.

Mikhail Matveev is a member of the Movement to Defend Khimki Forest.He contributed this comment to Bellona Web. It also appeared in the EU Observer.