Published on February 18, 2011 by Charles Digges 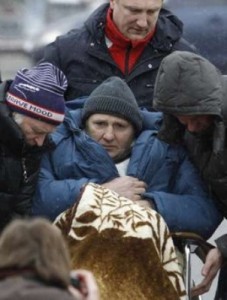 Comments from both the UN and the EU were notable in their focus on Russia’s continued practices of harassing and beating opposition activists and investigative journalists, as well 19 unsolved murders of reporters in the past 10 years, according to statistics from the New-York-base Committee to Protect Journalists (CPJ).

“[Medvedev’s] efforts are appreciated but not advanced sufficiently to be described as a success,” U.N. High Commissioner for Human Rights Navi Pillay told reporters toward the end of her five-day visit to Russia.

“There are still too many problems in the sphere of human rights.”

From the EU, criticism was more withering.

“President Medvedev has promised to fight legal nihilism, but Russia has been under a long reign of legal cynicism. One third of complaints to the European Court of Human Rights are cases concerning Russia,” said Werner Schulz, German Green Party member, Russian daily Kommersant reported.

Quickly on the heels of these barbs, activist for the Khimki Forest – one of the most contentious human rights and environmental flashpoints in recent memory – have turned to the UN High Commission for Human Rights with a catalogue of human rights violations.

The $8 billion high-speed toll road project between Moscow and St. Petersburg that will run through the ancient oak wood of Khimki Forest north of Moscow was halted over the summer by Medvedev after mass demonstrations and near fatal beatings of reporters and activists. Medvedev said his government would study alternative routes. Several of the contractors on the project are said to have high level government connections.

In December, the Kremlin announced the project would go forward as planned, despite the open wounds among civil society organizations and the widespread unpopularity of the project at large. Last week, it was announced the clear cutting would resume in March.

The UN and EU statements are the most recent high-level international reproaches of Russian human rights policy, but for many activists on the ground, the intervention seems too late.

In 2008, a broad spectrum of activists and journalists wrote Medvedev with an appeal to ease the beatings and killings among the civil society sector. The last two years have proved that little has been done.

The Khimki activists cited several human rights transgressions in their appeal to the UN High Commission on Human Rights, the most glaring of which was the 2008 beating of reporter Mikhail Beketov, who edits Khiminskaya Pravada, a local paper that has run many corruption exposes on the Khimki project.

In November of 2008, he was beaten in front of his apartment and left for dead. His injuries necessitated the amputation of one of his legs several of his fingers and caused brain damage impeding his ability to speak. He is still in hospital, where he receives full time care. No arrests have been made in his case.

The Khimki defenders also catalogued that they had set up a camp within the Khimki forest to stop what they described as illegal clear cutting. Indeed, they have said Teplotekhinka, the firm responsible for clear cutting and construction, does not have a permit to do so.

Their camp was violently disbanded in July 2010 by men in white hoods and bearing Nazi tattoos.

They also cited they November 4 attack on activist Konstantin Fetisov, who was beaten with baseball bats, cracking his skull. Fetisov was hospitalized for two months and recently regained consciousness.

Four people were arrested in connection with his attack, including a highly place official in the Khimki administration, but activists suspect that whoever ordered the attack is still at large.

Fetisov’s attack was followed two days later by the beating of Kommersant reporter Oleg Kashin, who was also covering the story. Though he is now recovered, his brutal attack, which involved one attacker holding him while another beat him unconscious with a pipe, was caught on a security camera. The stomach-turning footage was broadcast on state television to national outrage. No arrests have been made in Kashin’s case either.

Finally, the Khimki forest defenders city the February 11 police detention of Khimki activists Alla Chernyshyova with her two children, 3 and 6, when she was accused of planting a fake bomb at the site of one of the groups demonstrations, which she and other activists deny.

She was released later in the day, but told Bellona Web that police from the organized crime unit said there would be other activist round-ups to come on the issue of the fake bomb, which she was not shown during her questioning.

The activists concluded in their appeal that Russia is seeing “systematic violence and pressure on people who are trying to save the forest,” and ask that they UN High Commission turn to Medvedev with a request to drop the road project.

Medvedev has styled himself a champion of democracy, fighter against corruption and modernizer of the economy since he was steered into the Kremlin three years ago by his mentor, then president and current Prime Minister Vladimir Putin. But this overhauld has been viewed as mostly cosmetic by Russian activists and journalists.

The UN’s Pillay said there had been some progress in Medvedev’s modernization plans, but stressed there were “also some serious setbacks … and apparent serious miscarriages of justice” including the murders, intimidation and harassment of human rights defenders and investigative reporters.

Among the other crimes against reporters that have not been solved, noted Pillay, was the 2006 shooting of Anna Politkovskaya, one of Russia’s most strident critics of Kremlin policy in Chechnya.

Pillay also drew attention to the abduction and murder of Chechnya-based rights activist Natalya Estemirova in July 2009. Estemirova worked closely with another murdered activist, Sergei Markelov, and another reporter, Anistasiya Baburova, both of whom were shot dead in a brazen daytime killing in the center of Moscowin January of 2009. Baburova worked for Novaya Gazeta, the same crusading newspaper where Politkovskaya worked, and Markelov was a regular contributor to its op-ed page.

Their murders, too, remain unsolved.

CPJ lists Russia as eighth on its “Impunity Index,” a listing of states where journalists are killed regularly and governments fail to solve the crimes.