ST. PETERSBURG – In an apparent new approach to silencing representatives of the Defence of Khimki Forest movement, says their leader Yevgenia Chirikova, Russian child services authorities are threatening to take away their children.

Published on February 25, 2011 by Boris Vishnevsky 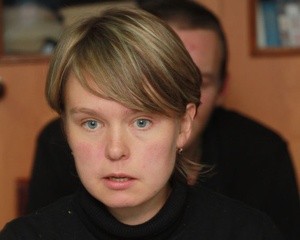 Harassment and even brutal violence against activists for the forest and journalists who are covering the story has become nearly an expected consequence as reporters and environmentalists pit themselves against strong and shadowy government interests that lay behind the tree felling project in the ancient wood north of Moscow.

But threats to take away children from their activists parents has become a new, unexpected tactic of the authorities.

“[Earlier this week] child services came to my house […] and because I don’t answer the door for anyone, they turned to my neighbors and announced, to their surprise, that they filed a complaint – I am apparently torturing my children,” said Chirikova in an interview with Bellona Web.

Chirikova says she doesn’t open her door to anyone aside from Alla Cheryshyova, another member of the Defence of Khimki forest movement, who recently had a scrape with authorities. Chernyshyova was detained by police – with her children, 3 and 6 – and accused of planting a fake bomb at a demonstration. During her interrogation, authorities repeatedly threatened to take away Chernyshova’s parental rights.

Chirikova contacted child services and she said the conversation revealed that her neighbors had denied filing a complaint, though their addresses were shown in the document.

The child service authorities told Chirikova that they had received a complaint that her children were hungry, that no one is feeding them, that they are unbathed, that homeless people constantly visit and beat and punish the children, and that the authorities are obligated to investigate the complaint and turn it over to the police.

Odours of times past

Though Bellona Web was unable to independently verify Chirikova’s account of her conversation with child services, the apparently anonymous allegations against her over the treatment of her children follow the old Soviet pattern of so-called “donosy,” or anonymously-filed complaints to various authorities against individuals for all manner of crimes, both political and criminal. Such complaints were routinely filed on the basis of rumours or simple personal hostility.

Under the old system, defendants were stripped of their right to face their accusers or substantiate the exact allegations against them, thus making it impossible to defend themselves. Since Soviet times, the system of donosy has managed to survive in various iterations, allowing government bodies to falsely accuse without basis primarily political opposition figures with deeds unrelated to their opposition activity.

What did the neighbors say?

Chirikova’s neighbors said that child service representatives showed them a letter composed with their return addresses, but with distorted names written with a typewriter.

“Because I live on the territory of the Khimki municipality, I clearly understand the consequences of all of this activity,” said Chirikova. “After this check, I assure you, the will find anything they need: that I have a munitions cache, a supply of bombs, and narcotics spread in a thin dust all over the floor. I think this is pressure, pure and simple.”

Chirikova added that she “clearly understood” why all of this was being done, saying that the aim was to break up the movement to defend the Khimki forest, through which the government intends to build an $8 billion high speed toll road between Moscow and St. Petersburg.

“Such are the tactics of our enemies, whose efforts only convince us that we are right. We see they have no other rationale but terror,” said Chirikova.

The project has been a flashpoint of environmental controversy since the summer. In August, Russian President Dmitry Medvedev halted the project after massive protests for evaluation of alternative routes, but in December, without any public discussion, the Kremlin gave the nod to continue the project as initially planned.

Tree felling in the wood is scheduled to resume in March.

The announcement that the forest felling would continue sparked a new spate of environmental activity and backlash from authorities. Several of the construction firms involved in the project are said to have high-level political connections.

“All of these arrests and attack only show that we are dealing with absolute evil. But evil must be punished. Therefore we will not yield,” said Chirikova.

A renewed campaign of pressure against Khimki activists, said Chirikova, began after the release of ***an independent environmental assessment indicating that the Kremlin chosen, Medvedev-approved route for the highway was the worst of all possible options out of another possible 11.

Yet pressuring women involved in defening Khimki forest by threatening to take their children away is quickly becoming a trend.

Chirikova’s colleague Chernyshyova was detained with her two children on February 10, when she was accused of planting a fake bomb in a plastic bag at the site of a February 1 rally. Chernyshyova told Bellona Web that she had brought a plastic bag containing various activist materials to the rally, but that she had also returned hom with it. During her interrogation, police told her that had left a bag behind, but failed to produce it or a model bomb it allegedly contained. A criminal investigation on hooliganism has been launched.

In another instance, the “Viktoria” Centre for children and youths’ creative development, which is headed up by Galina Ledevyeva, has come under the gun. The Centre, which has 1,700 students from ages 5 to 20 focuses on an alternative educational program geared towards the arts and the creative development of its students. The Centre is tuition free so that financially disadvantaged students may also attend.

The Centre’s facilities are also located on a half a hectare of land that is extremely attractive to real estate developers. The Khimki local government claims that its administration building has fallen into disrepair, despite a reconstruction of its façade in 2006, and the administration building has been moved to the Centre and the Centre has been relocated to the area where the Khimki Arena stadium is under construction. The decision was taken 17 years ago, in 1993 despite the fact that the Viktoria centre had been given unlimited rights to use the land. The Centre was ousted to make way for the administration last year.

Since September of 2010 the Viktoria Centre has been cooped up under the grandstands of the stadium and suffering from a lack of space for its activities – the space designated to the Centre by local authorities under the stadium bleachers is half what it had before. The Centre now perpetually has to make staff cuts and the conditions for the students are very poor. There is little natural air ventilation, and the air is filled with construction dust. Centre Director Lebedyeva has also been the target of official and legal harassment, and the Centre is subject to endless checks.

In the meantime, beatings of reporters and activists who are covering the Khimki project have become a hallmark of the road building scandal. Most prominently, Mikhail Beketov, the editor of Khiminskaya Pravda, who was beaten and left for dead in November 2008, still has not recovered his ability to speak. Suffering from brain damage, he is still in hospital, where doctors amputated his right leg below the knee and several of his fingers.

Oleg Kashin, of Kommersant, was also beaten savagely in an attack that was caught on a video surveillance camera in November 2010. The footage of one man holding Kashin while the other beat him with a pipe was broadcast on state television to national disgust.

Konstantin Fetisov, an activist for saving Khimki forest was also viciously beaten last Novemeber. He is still in hospital and had not regained consciousness.